by Becky "President of Everyone" Topol

There is so much great new stuff in the store this week! After a torturous wait, we’re thrilled to have

Forbidden Desert on the shelves. A thematic sequel to the massively popular Forbidden Island, Forbidden Desert sets you out on a cooperative quest to find the parts of a legendary flying machine, scattered in the shifting sands of a desert. Forbidden Desert features an ever-changing board, constantly re-shaped by an increasingly brutal sandstorm. You and your team must carefully manage your cards to get to various places in the desert, hoping to locate the machine parts along the way. If you can rebuild the ship, you fly out of the desert as heroes. If not, you become permanent parts of the desert yourselves. The flying machine included in the game is EXTREMELY cool, with various detailed and moving parts. A bit harder than its predecessor, Forbidden Desert is an awesome choice for adventure-seekers of all ages. 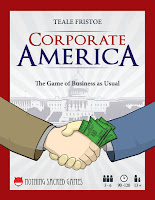 We have several games in the store that we like to call the “DC games”. These are board games that focus on politics, legislation, corporate sneakiness, and usually plenty of backstabbing. Added to this pantheon is Corporate America, a satirical game about corporate influence in government. Each player takes the helm of a corporation, and throughout the various game phases they attempt to build up their company, make money, bribe each other, manipulate the consumer population, and eventually run for President. The President gets Executive Privilege, can affect other companies, and of course, blatantly break their campaign promises. All players keep their money secret throughout the game, and whoever has the most money at the end wins. Are you underhanded enough to rule Corporate America?

Suburbia is a tile-laying game in which players try to build their small town up to a major metropolis. The first aim is to make your town self-sufficient by building commercial, industrial, civic, and residential areas, as well as special points of interest that make use of the resources of nearby towns. As your town grows and improves, more people will flock to live there, and the town will produce more money and resources. Cities can grow to contain massive skyscrapers and bustling international airports, attracting yet more citizens and cash. Whoever has the biggest population at the end is the winner, with the greatest city of them all! Suburbia snagged this year's Mensa Select award, so it's a great choice for those looking for a challenging twist on the popular civilization-building framework.

The streets of Victorian London are filled with fog and mystery, and it’s up to you to solve the case! In Sherlock Holmes: Consulting Detective, you and up to seven of your friends all try to become top sleuth of London, aiming to beat out Sherlock Holmes himself! The game, winner of the 1985 Spiel des Jahres Award, is chock-full of detailed parts and props including a London directory, detailed maps, newsprint, and a casebook. Choose one of the ten included mysteries, and try to solve it faster and more efficiently than Master Holmes and your opponents. More points are awarded when you use fewer clues to come to the right conclusion, so you must think carefully before you act. The world of the game is deeply researched, and accurate with respect to the reality of Victorian London and the works of Arthur Conan Doyle. Some players even choose to take the slow route to solve a crime, which costs points but allows them to follow every lead, explore the city, and meet characters like Lestrade, Moran, and Moriarty. Full of opium dens, murdered lions, and missing paintings, Sherlock Holmes: Consulting Detective has a deep and engaging world well worth investigating.

And those are just a few of the cool new arrivals we’re excited about this week! We also have an Edward Gorey themed dress-up game in the form of E. D. Ward: A Mercurial Bear, which is both adorable and slightly creepy. The new Android: Netrunner expansion Creation and Control will be arriving today. This deck focuses on Shaper and Haas Bioroid (which Kempe correctly predicted I wouldn't be able to spell right on the first try). And for those of you who need a little more chaos in your lives, Fluxx: the Board Game will also be coming in today! We have a demo I got a chance to peek at, and this thing looks wild. Not only does it introduce a shifting, changing board to the Fluxx framework, but each player must now juggle several pawns, various goals, and crazy movement rules. Be sure to check out our Looney Labs Game Night on August 6. Andy Looney of Looney Labs will be here to demo Fluxx: the Board Game, as well as all your other Looney favorites. Click here for more info!

Do you like the wild world of Fluxx: the Board Game or the manipulation and control of Corporate America? Dig the adventure and danger of Forbidden Desert, the shadowed mystery of Holmes’ London, or the gleaming progress of Suburbia? Let us know in a comment below!
Posted by Labyrinth Games at 12:09 PM