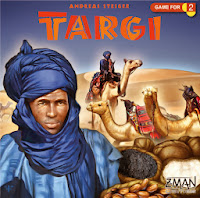 Our first new game this week is Targi, a two-player game which was nominated for the Kennerspiel des Jahres this year. Its nomination for the Kennerspiel (Expert or Connoisseur Game of the Year) rather than the standard Spiel des Jahres (which focuses more on family games) indicates that it’s on the more complicated end of the spectrum. Originally published in German last year, this acclaimed trading game has finally been printed in English! Each player is attempting to get the better of the other by collecting more precious goods and coins. Certain areas of the playing field, made entirely of tiles, can be taken into players’ hands and replaced with new ones. This leads to a constantly shifting board, meaning players can take away places their opponent might need. A complex and sparsely beautiful game, Targi is a great worker-placement game for two advanced players.

For you fans of Legendary: A Marvel Deck Building Game, we now have the Dark City expansion! This expansion includes 17 new heroes from groups like the X-Force and Marvel Knights, six new villain groups, new Masterminds, Henchmen, and Schemes. Improved art makes it easier to tell which hero is equipped with which power at a given moment. There is also a new game mechanism for the Bystanders; in the base game, they just wait to be kidnapped or rescued. Now, they’re getting involved in the action...

And if you like RPGs (roleplaying games), something beautiful is on our shelves. The Fate Core System book is in! With detailed instructions on how to build characters, as well as how to construct and run a campaign, Fate Core is a massively flexible system which allows for a multitude of games in limitless settings. Also, the cover features equally kick-butt characters of the male, female, AND gorilla persuasions, which I think is worth noting.

If you just want a basic introduction to the system, or don’t intend to be the Game Master, I would highly recommend the Fate Accelerated book. This is a fast, simplified guide to character building and gameplay, and for $5 it's a serious steal for anyone even slightly interested in the hobby. It also contains a ton of sample characters and gameplay situation, to give rookie RPG-ers a clearer view of how a game would go. Don’t forget to pick up some Fudge dice too, and bring them along to our Taste of Fate Core event on August 10! It’ll be a great, low-pressure way to give the system a try.

It's important to note that Love Letter is also back in stock. This is a great, fast little game that focuses mainly on card counting. I know a lot of you have been waiting for it to be back, and it's finally arrived. Now get back to wooing that princess!

And, for all the puzzle lovers out there, we also received some new jigsaw puzzles. We are especially fond of these new Thingie puzzles which would make a wonderful, inspirational gift for your favorite puzzler. Wild, swirling, geometric designs mean these puzzles pack a challenging punch in a small package.
Posted by Labyrinth Games at 2:35 PM