by Becky "Don't Make Me Turn this Bomb Factory Around" Topol 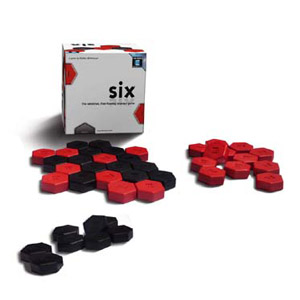 There's so much great stuff back in the store this week! Spatial reasoning puzzlers for two players have returned in force. Six is a hex-based game in which players take turns placing six-sided tiles. Players race to arrange six of their tiles in one of the three “winning shapes," while blocking their opponent from doing so. Similarly, in Paradisio you take turns laying out tiles in an four-by-four grid building an aerial view of a tropical island scene. The game feels like a mix between Six and Carcassonne, in that the edge of a tile must match up perfectly with the edges of any tile it touches. Get rid of all your tiles first, or arrange the grid so your opponent can’t place any more tiles, and you get to claim the island paradise as your own. Paradisio is a game that even young kids can learn, but still poses a challenge for adults (as long as you remember that tiles have to remain in four-by-four-layout, which I forgot on several occasions, leading to a series of totally nonsensical tied games). Both Six and Paradisio are perfect for travel, as all the pieces fit in the supplied canvas bags, and can be played on a limited tabletop space like a plane’s tray table.

Like chess and Hive, The Duke is a two-player game in which the movement rules differ from piece to piece. The Duke changes this up in that every time a wooden tile moves, it flips over, and must follow the movement rules of that side of the tile on its next turn. Troop tiles are randomly drawn from a bag and added to the board as the game goes on. This, as well as the mechanic of terrain tiles, adds a huge element of variety and unpredictability to the game. Various rule sets include different objectives, but in the basic game, whoever can capture the enemy Duke will rule the land!

In our more traditional board games section, The Manhattan Project has returned. Players become great nations in an arms race to build the biggest, best nuclear weapon. A low-luck game, The Manhattan Project leaves it entirely up to you to decide how to most efficiently advance your weapons research. Do you want to focus on your bomb-making infrastructure? Expand your military to protect it? If you think your neighbor is getting a little too much of a lead, you can send a spy to steal from them, and if you think they’re getting a LOT too much of a lead you can even call in an air raid. The Manhattan Project is a worker placement, resource management, and strategy game perfect for those who want to control the fate of the entire world.


This is a big weekend for Magic: the Gathering players: It’s the official release of the 2014 Core Set! Starting on Friday, July 19, Core Set cards will be

available in-store. All weekend, we will be offering a 30% discount on booster boxes, and anyone who buys a box will receive a foil alternate-art Ratchet Bomb card while supplies last. We will also have Fat Packs, Intro Packs, and Deck Builder’s Toolkits. These toolkits are great for beginners, and contain 125 semi-randomized cards, four assorted booster packs from various sets, 100 basic land cards, a Deck Builder’s Guide, a learn-to-play guide, and a storage box with awesome art of planeswalker Chandra Nalaar. 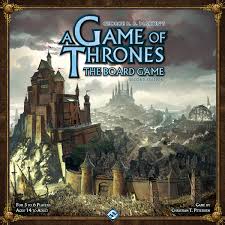 Those are just a few of the exciting returns this week. Others include kids’ games Quick Quick and Taiga, geography puzzler Map It: World, and builder Architecto. The totally unique String Railway is back, and for those who dream of conquering kingdoms, A Game of Thrones: The Board Game is in the store again! And finally, there’s a new hope for your Star Wars: X-Wing Miniatures fleet, because the A-Wing and TIE Interceptors are back in stock! Which of these games are you most excited to see back on the shelves? Let us know in a comment below!

Posted by Labyrinth Games at 5:39 PM