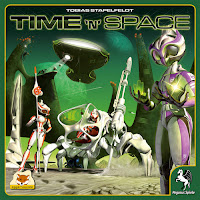 Time ‘n’ Space is an improved remake of 2006’s Space Dealer, and made a huge impact at Origins. This spacefaring economy game differs from its relatives in that it doesn’t have the same sprawling nature: Sure, you have planetary economies to juggle, but you only have 30 minutes in which to do so. For each action you want to take, you must flip over a one-minute sand timer, of which you only have two, and complete the task within that time. Production of goods, pickup-and-delivery, economic management, and face-to-face negotiation between players is compressed into this half-hour time frame, with all players acting simultaneously. The game also includes a 12-minute introductory game for new players, and 12- and 30-minute soundtracks are available to download from Stronghold Games. If you’re looking for a game of interplanetary competition, but aren’t interested in an hours-long time commitment, this more frantic interpretation of the genre may be just the thing for you. 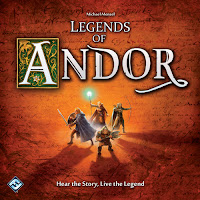 This year’s Kennerspiel des Jahres winner is Legends of Andor, a cooperative adventuring board game. Players are heroes defending the realm of Andor from invading hordes, which are kept on the march by the game system itself. Throughout five unique linked scenarios, and a sixth created by the players, the heroes must balance their priorities to complete dangerous quests and ensure a happy ending to their fantastical quest. With a plot driven by a special deck of cards, Legends of Andor puts players at the center of an unfolding epic where they must choose between personal glory and defense of their beloved realm. 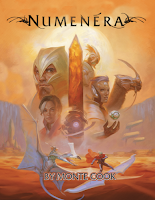 Numenera, the new RPG by Monte Cook of Dungeons and Dragons fame, has arrived. This science fantasy game is peopled by the inhabitants of the Ninth World, built on the bones of previous societies that have collapsed, moved on, or transcended reality as they know it. Bits of their technology, known as numenera, are so advanced and foreign that they almost seem to work by magic. Players set out to find these technologies—some of them cobbled-together doodads only good for one use, others as vast as the linkages between the satellites above their world—and use them to improve their own future. The book includes tons of game-building goodies, including a large bestiary, descriptions of a plethora of technological items you might encounter, four preset adventures, and Game Mastery advice from Monte Cook himself. 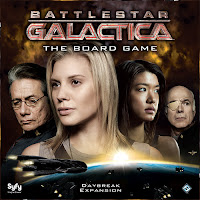 Daybreak is the newest expansion for the Battlestar Galactica board game. The sewage treatment ship Demetrius seems to be the best hope for humanity’s survival, and the already tenuous truce between human and Cylon is being tested. This new scenario includes two new game boards, 12 new character cards, a Cylon Leader and Mutineer option, as well as new Skill, Crisis, and Mutiny cards. The Search for Home gameplay option opens up a scenario aboard the Demetrius, and allows players to not just keep surviving, but to actually try and find their ancestral home on Earth. 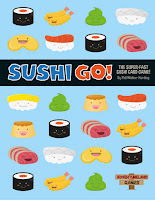 After long absences, we've restocked Ghost Story and Sushi Go! Sushi Go! is a speedy card-drafting game. As you pick-and-pass cards, you must try to make the best combo of the sushi dishes that whiz by. Score points for getting the most rolls and full sashimi combos, use wasabi to triple the value of a roll, and be on the lookout for dessert! Whoever has the most pudding at the end of the game gets a bonus. A delicious, delicious bonus. 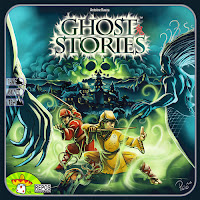 And I’ve got some bad news, guys: Wu Feng, Lord of the Nine Hells, has discovered the location of the funerary urn containing his ashes and has sent his horde of demons and ghosts to help him reclaim the urn and come back to life. Don’t you just hate when that happens? Ghost Stories, a cooperative game for one to four players allows you to do something about it. As Taoist monks, you travel around the besieged village—laid out on a modular game board—and perform exorcisms. The various ghosts (including what appears to be a levitating evil mermaid, causing me to get more excited about box art than I have in a while) can defend against your spiritual attacks, and even put randomized curses on you. Different tiles on the board can give you bonuses though, and you’ll definitely need them to defeat the incarnation of Wu Feng, the Damned with a Thousand Faces himself, and win the game!
Posted by Labyrinth Games at 7:49 PM