NOTE: One of Labyrinth's main focuses is on learning through non-electronic games. In this endeavor, we have developed a rather extensive educational outreach program over the last couple of years. We currently run aftercare enrichment game clubs at 12 local schools, teaching over 300 children aged 3 to 13 new games each week; we teach professional development classes for DCPS teachers; and we work with local schools to host family game nights, and to develop game lending libraries. As part of these efforts, we are working hard to identify the best board and card games to support learning. We will be writing a series of blog posts describing some of the games we use in these programs. Hope you all enjoy the series. Here's the first...


Learning to play a game for the first time can be difficult, especially for younger children. Besides just learning the written rules for a game, young players work to master the unwritten rules: wait patiently for your turn, pay attention to other players’ actions, be a good sport. Cooperative games help children by easing them into the experience of winning or losing a game.

In a competitive game players are pitted against each other, and at the end of the game they are divided as winners or losers. In a cooperative game, players work together toward a common goal. As a result, all players share the joy of a win or the disappointment of a defeat. Also, because each player wants the other players to do well, cooperative games encourage children to communicate with each other and suggest the best strategy. This is helpful when players are not evenly matched. For example, siblings separated by a few years may become frustrated with competitive games if the oldest usually wins, but if they must work together to win, the older child will want to help the younger.

Here are a few examples of cooperative games and how they teach players to work together.

In this game players race to get their characters to Picnic Park before pigs eat their picnic. All players must reach the park before the game ends, but each person moves only a single character. A spinner determines actions and can trigger a mini game where all players must look for as many copies as they can of a particular object before the timer runs out. Players then each move a number of spaces equal to the number of objects found. To be successful, players need to communicate about their strategy so they can be sure to find as many unique hidden objects as they can. 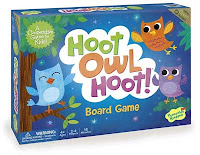 Hoot Owl Hoot is one of many great cooperative games produced by Peaceable Kingdom. The players' goal is to get all of the owls home to their nest before the sun comes up. Players choose from a hand of three cards to move any of the owls closer to the nest, but if anyone draws a sun card the sun advances one space toward daylight. Players succeed by planning their moves together to maximize the distance traveled in each turn. 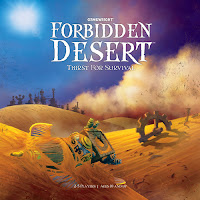 This is a sequel to the extremely popular cooperative game, Forbidden Island. More complex and much harder to win than its predecessor, it is fun for adults as well as older children. In Forbidden Desert players are stranded until they can find the pieces to build an ancient airship. Players move independently, but can share water and cards, and are encouraged to plan their actions together.

The ability to win and lose gracefully is important, but cooperative games can provide a lower-stress setting for kids to learn important social skills, as well as the gaming skills they need in order to progress with competitive games. Pus, they're more fun for the whole family; even simple games are more enjoyable for adults when they get to work out a strategy together with their kids!

Some of our other favorite cooperative games include:

For younger kids:
For older kids and adults
Posted by Labyrinth Games at 10:00 AM