The reprint of Parade brings gorgeous art and beloved characters to a card collection, hand-management game. The denizens of Wonderland are organizing a parade, and you have to decide what order they will march in. Alice, the Mad Hatter, the Cheshire Cat, and other famous faces from the land beyond the looking glass appear on cards of different colors and numerical values. Depending on the card you place, you must collect other cards which give you points. But since everything is topsy-turvy in Wonderland, points are a bad thing. Whoever can manage their hand and place their cards most cleverly will collect the fewest points and be declared the winner! 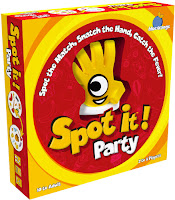 Spot-It Party puts a whole new spin on the incredibly popular game of Spot-It. The 55-card deck has all-new pictures to match, with each card still having exactly one match to any other card in the deck. Play the basic game and race to match your card to the top of the central stack first, or try out one of the six new variants! Mini-games like “The Race”, “Dynamite”, and “Double Frenzy” incorporate the new card stands and Spot-It logo totem. Spot the matches and grab the totem for bonus points! This new variation on the excellent Spot-It formula adds a new level of difficulty and interactivity to the already addictive game. 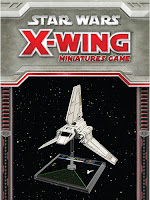 The new X-Wing Minatures Game expansions are in, and they're as gorgeous and detailed as we've all come to expect. The large Lambda-class shuttle is my personal favorite at the moment, though that’s mostly because its wings actually move. In terms of gameplay, the Lambda is the only ship so far that has the option to stay still on its turn, which is a huge new strategic element. Also available are the transport ship HWK-290 “Hawk”, the heavy-hitting TIE bomber, and the precision-targeting B-Wing. Bring your Rebel and Imperial fleets up to full force, and see who truly has the power to rule the galaxy!

So your family farm is doing well! Congratulations! Now it’s time to expand with More Buildings Big and Small. This expansion to the two-player Agricola variant All Creatures Big and Small adds 27 new buildings to your game, as well as a fifth Stall tile and a farm expansion. Use new and innovative strategies to give your animals more room to grow, breed, run free, and give you more victory points than ever before! 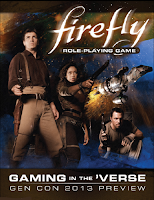 Browncoats everywhere have dreamed of exploring the ‘Verse for years, and now that dream is a role-playing reality; the Firefly Role-Playing Game: Gaming in the 'Verse has arrived! This book, which is a special preview release of the game that is due to be published by Margaret Weis Productions, includes everything you need to build your own ship and create characters to crew it! There are also pre-made playable character sheets for all nine members of the crew from the cult classic TV show, and of course, you can take to the skies in the beloved rustbucket Serenity herself. Basic rules will guide you through the creation, running, and play of your own scenarios or any of several pre-made adventures (ever wanted to take part in “The Train Job”? Done.). The book also contains helpful world-building info like an interplanetary atlas, glossary, and, most excellent of all, a Chinese translation guide that will have you talking - and swearing - like a real tǔ fěi (bandit) in no time!

And that’s only a few of the great new things that have arrived this week! The Kanai Factory Limited Edition of Love Letter is here, with its elegant sumi-e style art, altered roles, and tweaked rules so you can find new ways to win the Princess’ heart. This set also includes two exclusive promo cards! Specialty dice for Fate-based RPGs are now available in color-themed sets so you can coordinate your (shiny and awesome) dice to the ambiance of your world, like chrome and electric blue for Atomic Robo and brassy metallics for Spirit of the Century. New books on chess and bridge strategy are on our shelves for fans of the classics - one even promises that you’ll be able to play bridge in just 10 minutes! A perfect choice for anyone looking to break into the complex bidding game. And for those who yearn for adventure, the Pathfinder Adventure Card Game: Rise of the Runelords base set and character add-on deck are both back! This card-and-dice game challenges you to build a deck of magic and weapons that will help you survive the rising evil in Varisia. Pick it up and set out on your quest if you dare!
Posted by Labyrinth Games at 1:01 PM