After having a ton of customers recommend and ask about it, Stefan Feld’s Bora Bora has come finally been released in the U.S. and has arrived at Labyrinth. This set collection and worker placement game hinges on a dice-based strategy - the dice themselves can be placed on various locations to complete goals, and the number on the die determines the outcome! Smaller numbers can block your opponents, while larger numbers can get you the best possible version of an action. The men and women of your tribe must build huts, find fish, and curry favor with the gods who will allow them to break and change the very rules that govern Bora Bora! Many people are saying the is Feld's best game.

Theros, the first set in the Theros block for the collectible card game Magic: the Gathering, is releasing today, September 27, 2013. Theros is a large expansion and will be followed by Born of the Gods and Journey into Nyx. Theros has an ancient Greek theme, with lots of new Labyrinth cards. You know we are excited! We have booster packs, booster boxes (with a special 25% discount off MSRP), Fat Packs, Intro Packs, and even some remaining pre-release packs.

We’ve all heard Descartes’ famous statement, “Cogito ergo sum”, or “I think, therefore I am”. The card game Ergo challenges you to prove something a little different: “Ludo ergo sum.” I play, therefore I am. In Ergo, each player claims a logical variable to represent themselves, and uses cards in an attempt to build up a sound logical proof for their own existence. Using cards with basic logical statements like “And”, “Then”, and “Not”, as well as tricky cards such as Tabula Rasa, Revolution, and the all-powerful Ergo, players must construct consistent logical statements that negate or support the very existence of their opponents. Anyone who still exists at the end of the round gets as many points as there are in the proof! This game is perfect for those looking for a quick card game that provides a brainy challenge, and is popular among computer programmers, mathematicians, philosophers, and people who like proving that their enemies don’t exist. Sounds perfect for our customers, right?

It’s never too early to get into the Halloween mood, and what better way than with a creepy game? Zombie Dice 2: Double Feature is an expansion to the perennial favorite, Zombie Dice. With three new dice making up two distinct expansions, this set opens a whole world of possibilities while still easily fitting inside your original Zombie Dice tube. The first expansion, Big Summer Action Movie, introduces the super dangerous yet super brain-a-licios Hunk, and the speedy, gun-happy Hottie. Santa Claus Meets the Zombies introduces jolly old Saint Nick to the zombie apocalypse, and he’s brought his sleigh full of goodies! Some gifts, like the football helmet, help protect you on your hunt for brains, but of course, Santa’s also packing a shotgun. All three of these new Hero dice can be added into your base game, and can even rescue each other from your brain stockpile. Increasing both risk and potential reward, Zombie Dice 2: Double Feature allows for fresh new strategy in this push-your-luck hunt for brains.

Building a civilization is more than just battling your neighbors, and this comes through in Christian Marcussen’s Clash of Cultures. Played on a board of arrangeable hexes, Clash of Cultures is a highly intuitive, streamlined game that allows for a variety of play styles; establishing and expanding civilizations, technological advances, completing objectives, building wonders, and military success all contribute to a successful civilization, or you can just focus on one aspect to become completely dominant. Centered around highly flexible tech trees which advance the game from a hunt-and-gather survival game to a complex civilization game where the happiness of each city is crucial. With over 250 miniatures, Clash of Cultures is an easy-to-play and relatively quick civilization game that combines the best of battle, technology, and history-making!

1775: Rebellion is a continuation of Birth of America series, and in this new installation the American Continental Army and Patriots take on the British Army and Loyalists in the attempt to control various colonies and territories. The various factions can call on Native Americans, German Hessians, or the French Army to either quell or aid in the growing rebellion. Each faction has its own deck to control troop movements, custom dice to resolve battles, and when a faction manages to gain control over an entire territory, they raise a flag. (Because as Eddie Izzard taught us: No flag, no country. Those are the rules.) Whichever side has planted the most battle flags by the historic signing of the Treaty of Paris is the winner! This game runs on the same basic mechanics of 1812: The Invasion of Canada, but is quicker to play, and it comes with the advanced “The Siege of Quebec” scenario. 1775: Rebellion is a great choice for history buffs and war gamers alike! 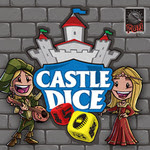 Castle Dice is a dice-drafting adventure for one to four players, taking on the roles of Princes and Princesses of the realm. According to the king, whoever can build the most magnificent castle will become heir to the throne, so you must set out for the borders, roll for resources, hire workers, and improve your castles. Lighter than popular dice-drafting game Seasons, Castle Dice game gives each player a certain number of dice which are then rolled into a central pool and drafted by all the players in an attempt to complete challenge cards. Your royal brothers and sisters aren’t the only ones who can steal resources from you; Barbarians will often attack and raid your stockpiles! Workers can be hired to improve your castles and protect your goods, while (adorable) farm animals give you special, powerful bonuses. With colorful, cartoony art, Castle Dice is a fun and fast new challenge! 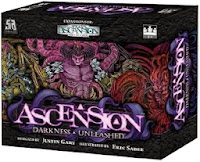 Expanding play from Rise of Vigil, Darkness Unleashed is the newest expansion for the deckbuilding game Ascension, and can also stand alone as a two-player game. This set contains 196 brand new cards, including new Dark Energy Shard Treasure cards, and Energize cards that elevate your Heroes, Monsters, and Constructs to even more powerful forms!


On top of all that, the new chapter packs for Android: Netrunner, Star Wars LCG, and Game of Thrones have arrived, and Hanabi and Lickety Quick are back. Whoo! Another exciting week at Labyrinth!