From the creator of Citadels comes a new game of gold and hidden roles. Bruno Faidutti’s Mascarade gives out randomized roles to up to 13 players, who are all vying to be the first to collect 13 coins. Identities are frequently swapped around the table, meaning that the game is brimming with possibilities for confusion and deceit. Each character card has special abilities that the player holding it can use, but since you’re never really sure what cards other players have, or even what card you might have, players can lie and claim the ability of other characters. You’ll have to call their bluff to stop them, but that comes with its own risks. With gorgeous art and easy-to-learn rules, Mascarade is a brain-bending game of lies, bluffing, memorization, and trickery. 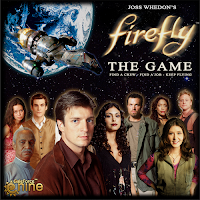 With all the Firefly stuff coming out lately, Browncoats are getting spoiled! The newest game to come out of the ‘Verse is Firefly: the Game. A complex, vastly replayable pick-up-and-deliver game, Firefly: the Game makes you the captain of your very own Firefly-class transport spaceship. Like any captain trying to make a living, you have to find a crew, find a job, and keep flying. Each player has a specific goal they’re trying to achieve, and whoever can get it done first will win, so handpick your mechanics, fighters, mercenaries, and travelers and fly from planet to planet getting work done. Talk to Badger, Niska, and Patience, among tons of other characters from the show, who may have leads on work that will keep you in the sky. Legal jobs are easier but pay less, so you may need to misbehave occasionally. Don’t forget the risks of the job though - the Alliance is looking for criminals just like you, your crew may mutiny at any moment, and the Reavers are literally out for blood. Complete with a little cardboard stegosaurus, Firefly: the Game is a sprawling sandbox for one to four adventurous Browncoats! 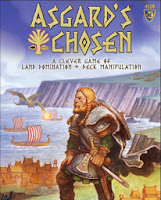 In Asgard’s Chosen you are a Teutonic lord at the end of the Bronze Age. With the discovery of iron ore in the peat bogs, you and the other competing lords have new and exciting ways to destroy each other’s armies, so you’ll need the gods on your side if you want any hope for the survival of your family and the expansion of your lands. Combining deckbuilding and area control, this game forces you to make some very tough choices; while land control is very useful, the favor of the gods determines the winner, and the gods demand sacrifice. Rally the most powerful deities of the Æsir to support you, fight creatures, take over towns, and master the elements to truly become Asgard’s Chosen. 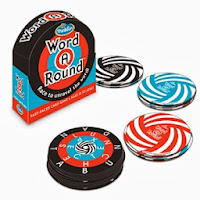 WordARound is a fast and furious word game perfect for any group of two or more. Each card has three differently-colored rings. Within each ring a word is written as a continuous circle, and your goal is to be the first to recognize and call out the word in the appropriate ring. When you find the word, you take the card, and the first player with ten cards is the winner! This may sound too easy to be any fun but trust me, it’s harder and more addictive than it sounds. When we got our demo in, we found ourselves playing it over and over and over again - the challenge and speed of the game were too much to pass up! With 100 cards and 300 words to discover, WordARound is a great party game that you can learn in an instant and play for hours! 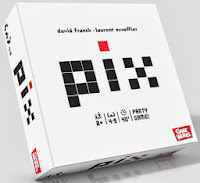 A good, fair drawing game is tough to find because some people are just better at drawing than others. That’s where PIX comes in. Based on the concept that everyone has just about as much experience drawing with pixels (that is to say, none), the game puts everyone on an equal footing. In each round, players are secretly given a word, which they must then draw out by placing square pixels on a magnetic board. All artists for the round have the same amount of time to create their pixelated image, but once time is up the player who used the fewest pixels gets to show their image to the judges first. Of course, the fewer pixels you use, the harder the image will be to recognize, so you must weigh your options carefully for each picture. Think you can turn ten pixels into an elephant? How about five? Try PIX and discover who really is an 8-bit wizard! 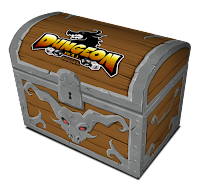 Dungeon Roll is a light, quick twist on traditional dungeon-crawling games. Players choose one of the various hero cards, each with its own special set of powers and a special Ultimate Ability that can be used only once per turn. Each turn is a mini dungeon-delve, beginning with the active player rolling dice to makeup a random part of adventurers to go on the quest with them. Another player acts as Dungeon Lord, and rolls the dice to determine the monsters and treasures that the heroes may encounter on that floor of the dungeon. Players must use the right tools and adventurers to defeat the terrible creatures, and hope they don’t arouse the wrath of the boss dragon! Dungeon Roll is a fun little game for fans of classic fantasy theming, or anyone just looking for a quick, easy-to-learn adventure to pass the time.

With our last shipment from Indie Press Revolution, the store has become an RPG lover’s paradise. Hobomancer and Bulldogs! are new, while favorites such as Durance, Hollowpoint, The Shab-al-Hiri Roach, Diaspora, Microscope, Dread, and Call of Cthulhu are back on the shelves at last! Any of these could be the perfect basis for a creepy Halloween game of your very own - what’s better than setting out some candy, waiting ‘til dark, and getting all your friends together to run amok in a scary world you get to create? If you’re new to role-playing games or just want to try one out in a no-pressure high-fun atmosphere, sign up for the spooky RPG portion of our annual A Taste of Horror celebration on October 26 by clicking here! Spaces are limited, but the event is free, and prizes will be awarded for the best costumes! 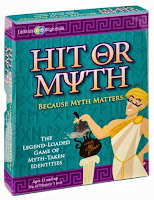 We're so excited to finally have Hit or Myth in stock! We got a demo of this game a while back, and have had more fun with it than just about anything in recent memory. A mythology trivia game, Hit or Myth is divided into four categories - Egyptian, Norse, Greco-Roman, and Western mythology. Each card has a trivia question about its regional mythology, as well as a bonus question and a conversation starter. The silly, conversational tone of the writing in this game is incredibly engaging and funny, and the cards are still very informative. Some of the biggest surprises came from the Western mythology cards. Did you know Davy Crockett's wife was named Sally-Ann Thunder-Ann Whirlwind? Neither did I, but I laughed about it for about an hour. Each card also has a conversation starter, one of which drove us to make puns about Valhalla for about a week and drive Kathleen totally insane. Hit or Myth is educational, fun, and silly - perfect for any party or gathering!

On top of all that, we got a bunch of new geography games and puzzles, King's Table (aka Hnefatafl, Tafl, or Tablut) is back, and three gorgeous new chess sets have arrived. My personal favorites are the Medieval-style set with its pudgy pieces, and the Isle of Lewis set, which is based on the design of a 12th-century chess set discovered in Scotland in 1831.
Added to our Game Demo Library this Week: Asgard’s Chosen, Rivers, Roads, and Rails, Flag Frenzy!, Flag Frenzy! USA, GeoCards World, GeoCards USA, GeoDice, Smarticulation: Language Edition I, Word Frolic: Village Idiom I, Time After Time, Count Me In!, Right Turn, Left Turn, Number Chase
Posted by Labyrinth Games at 7:39 PM