Bang! has consistently been one of the most popular games at our weekly Game Night, and now there’s a whole new way to take on the Wild West! Bang! The Dice Game allows you to take on the role of a frontier gunslinger, secretly driving towards the death of your opponents: the Sheriff and deputies won’t rest ‘til the outlaws are dead; the outlaws are out for lawmen’s blood; and the renegades just need to survive it all. Each with their own special powers, players roll special dice up to three times, with the results determining whether the player can attack their neighbors, heal their own wounds, suddenly find themselves in charge of a Gatling gun, or be the victim of an attack by arrow-wielding Indians! Beer and bullets will fly in the new Western adventure Bang! The Dice Game!

The newest release from Looney Labs, Choose One! is a party game where knowing your friends will net you points! On each turn, the active player chooses one card from their hand, each with two options, like “Hammock or Waterbed”, “Trip Around the World or Trip to the Moon”, or “Candles or Lava Lamp”. The other players must then try to guess which one the active player would pick. If you’re right, you move your scoring token along the track, and the first person to 11 points wins! This game is fun and simple, and the ten scoring tokens are all funny little trinkets of different shape and size, including a rocket ship, a brain, and a hot dog! An instant classic that’s great for big groups of friends, Choose One! is the perfect thing for your next party or family gathering.
Ascension: Apprentice Edition is a 110-card pack perfect for introducing two players to the game of Ascension. The card borders and frames are specially color-coded, so it’s easy for new players to tell card types apart. Specifically built for two-person play, the Apprentice Edition is a great way for novices to summon Heroes, defeat Monsters, and gain Honor!

For those Planeswalkers who love to battle amongst the monsters and gods of Theros, the Inspiring Heroics Event Deck has arrived! More complex and layered than Intro Packs, Event Decks are competitive and ready to play right out of the box. With a 60-card deck and 15-card sideboard, which includes 10 rares and a shockland, this blue/white deck is the perfect thing to pick up if you want to dive right into our Friday Night Magic standard tournaments!

Unquiet Dead is the newest expansion to the darkly humorous card game Gloom. This set adds more of the classic Modifiers, Events, and Untimely Deaths, and introduces all-new Stories, Undead, and Timing Symbols. The Stories give a special benefit to whichever family can claim them, but with misfortune plaguing you from every side, there’s no telling how long your family may be able to hold on to it. ‘Undead’ cards allow characters to become supernatural creatures, from a hideous, rotting mummy to a gruesome and terrifying wereduck. Spin a tale of horror and tragic death with Gloom and its newest expansion: Unquiet Dead!

Everyone’s favorite dungeon-delving parody game has a new variation! Munchkin: Pathfinder is the newest addition to the Munchkin family, and like all the others in the line it can be played on its own or combined with other sets. The Pathfinder set includes new classes like the Alchemist and Witch, and introduces brand-new Faction cards that let you join ancient orders like the Eagle Knights or Red Mantis Assassins. Gear up in your Armor of Skulls, strap on a T-Bone Stake, and set out to kill monsters like Goblins, the Ghoul Friday, and the Mother of Monsters! A great card game for RPG fans and novices alike, Munchkin: Pathfinder is the newest way to stab the monsters (and your buddies!), take their stuff, and make it to Level 10!
For Manhattan Project fans (the game, not the actual research project), the newest expansion, Second Stage, is here! This expansion consists of four mini-expansions including a second Nations expansion and the ability to have Rocket Technology. I said: ROCKET Technology! 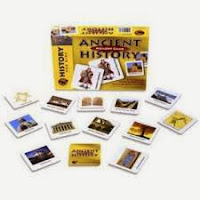 And from Geotoys, we got a whole gaggle of great history games! We now have traditional card-flipping memory games with the themes of American History, Ancient History, and Medieval History! Lay out the tiles face-down and try to find matching pairs of people, places, and things from the era. Whoever has the most tiles at the end of the game, is the winner! We also got Go Fish games (which include the rules for several variants) from each of those historical periods. Perfect for classrooms or home, and history buffs young and old, all of these memory and guessing games are sure to get brains buzzing!

Posted by Labyrinth Games at 9:14 PM