At long last, Terra Mystica is here again! This game made a huge splash several months ago, and then promptly disappeared from the market. Terra Mystica is a complex, low-luck game where every action can have numerous long-lasting repercussions. Taking control of one of the 14 differently-powered races, players must attempt to rule over the landscape. Players also randomly place two scoring tiles which determine special ways for them to get points and bonuses. There are essentially infinite ways to play this game, and difficult choices must be made every turn. Do you want to build something that will give you money right now, or something that will benefit your race in the long term? How are your terraforming projects going? The mermaids and the mountain dwarves can’t go to war if they can’t reach each other, after all. And be sure to keep up good relations with all the cults! This game is best suited to more experienced players, but is easy enough to learn that even your first crack at the game will be fun and rewarding. Make sure to grab a copy of this long awaited re-release of Terra Mystica before it’s gone again! 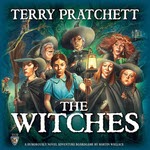 Just in time for Halloween, The Witches: A Discworld Game is the second in a series of three games being designed by Martin Wallace set in Terry Pratchett's Discworld. The first game of the series, Discworld: Ankh-Morpork, is a huge favorite among staff and customers here at Labyrinth. We have all been anxiously awaiting this game.

This game is a lighter, more family friendly game than the first. You play as trainee witches and roll dice to try to overcome obstacles of various difficulty levels. There are some cards which bring in an added dimension of decision-making. It's nice that there are competitive, cooperative and solo variations. The art is fantastic, and thematically, the game is sure to be loved by Pratchett fans. 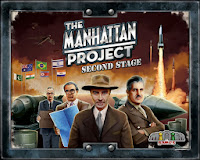 The Manhattan Project: Second Stage is a collection of four small expansions for the popular worker-placement game The Manhattan Project. Each of these expansions can be added to the base game on its own, or you can play with all of them at once! Nations 2, like Nations (available separately), adds countries for players to claim allegiance to, each with its own special powers. H-Bomb Technology gives you the incredible power of fission bombs, and Rocket Technology fits your warehouse with rocket-making abilities, adding more player interaction and offensive play into the game. Personalities adds in real people who were involved with the historical Manhattan Project, each with their own special abilities, and which must be traded out frequently. If you’re a fan of The Manhattan Project, Second Stage is an awesome way to introduce a little variation, or to change the game up entirely! 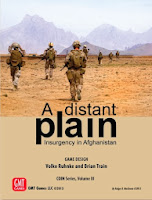 A Distant Plain is the latest in Volko Ruhnke’s COIN series, and places one to four players in the heart of the modern Afghan conflict. With the same easily-accessible gameplay system as Andean Abyss and Cuba Libre, A Distant Plain is the first game in the series to force two counterinsurgent groups to join together despite ideological differences in order to fight against the dangerous insurgency. With returning refugees, desertion by the government, and battles over ancestral land, A Distant Plain puts you in charge of the strategic challenges of the modern world! 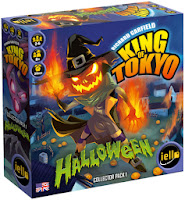 King of Tokyo: Halloween brings two new monsters and other great Halloween goodies to King of Tokyo! The monsters Pumpkin Jack and Boogey Woogey each come with eight Evolution cards that allow them to get bigger and badder, and the set includes six orange-and-black engraved dice perfect for Halloween. The new expansion also includes new Power cards called Costumes, which give a powerful effect to the monster wearing them, but can also be ripped off and stolen! As a special treat, the set includes an exclusive promo card for the upcoming game King of New York. King of Tokyo: Halloween has been flying off our shelves already, so be sure to come in soon if you want to get your claws on a copy!

Carcassonne was originally released in 2000, and the classic base set has just gotten an amazing makeover! Carcassonne: Winter Edition features gorgeous new art, covering the fields and cities with a coat of glistening snow! Perfect for collectors, this full game features redesigned versions of all the buildings and tiles of Carcassone, as well as 12 new animal tiles. Each animal means something different for the surrounding area, meaning that the rules may change from one section of the board to another: boars destroy crops; wolves eat thieves; and crows signal death and danger. One tile even features the wolpertinger, a winged jackalope-like creature from Bavarian folklore. With its breathtaking and detailed art, Carcassonne: Winter Edition is a new twist on the popular classic! 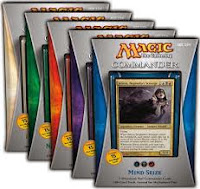 On Friday, Magic: the Gathering’s Commander 2013 Edition decks will all be available! Each tri-color “shard” deck is a ready-to-play collection of 100 cards with three legendary commander options to choose from, and 15 brand-new cards in each deck. With new Tempting Offer cards, as well as Curses, Panoramas, Shardlands, and Guildgates, these pre-constructed Commander sets are a force to be reckoned with right out of the box!