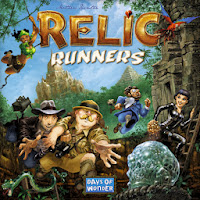 For you adventurous spirits out there, we now have Relic Runners; a gorgeous and surprisingly complex game of expeditions, tech trees, and collecting sets of precious relics from jungle ruins. Taking on the role of intrepid treasure hunters, you and your opponents must race to hack paths through the dense forests, uncovering abandoned temples full of precious goodies. Blaze new trails, but don’t get lost - you’ll need to get back to base camp for more supplies. There are tons of different ways to score points, meaning that this game is ripe with strategic options, while every advance you make may also present new and better options for your opponents. An easy-to-learn game that starts off simple and grows in complexity as the game progresses, Relic Runners has earned ringing endorsements at our Game Night, such as “Wow! No! Why would you do that?!” and “Are you getting near my relic? I hate you! I hate you so much, it’s MINE!”. 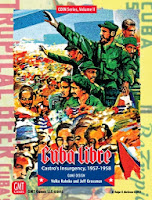 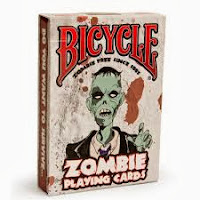 Just in time for Halloween, Bicycle has put out a set of zombie playing cards! This grimy-looking deck features court cards that have been replaced by a variety of disgusting, rotting, living corpses. Every card also has some helpful advice for the upcoming zombie apocalypse, including “Never bring a pet: they make the creepiest zombies ever” and “No one is safe, everyone looks delicious”! 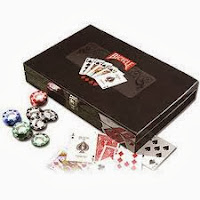 If you’re looking to take your poker game to the next level, the Masters Poker Set from Bicycle has everything you need. The set includes 300 2-color clay-filled poker chips at 8g tournament weight, along with two decks of premium playing cards. All this comes in high-gloss handmade wooden case. A must-have for any serious poker player, this set is perfect for Texas Hold ‘Em or any other poker variety. 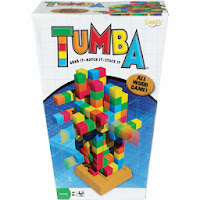 Tumba is a great spatial challenge in a deceptively simple package. A brightly-colored cousin to the ever-popular Jenga, Tumba simply challenges players to build a tower. However, each brick is divided into five equal sections of different colors, all in different arrangements. On your turn, you must reach into the bag and blindly draw out a brick. Each brick can be placed so that it touches pieces below it only where the colors match. Knock over the tower, and you’re out! A great party game and a tricky mental/physical challenge for one, Tumba adds an awesome new strategic twist to a classic concept.

InStructures is another building game to bust out at a party. Two teams each choose a Foreman and must compete in a building contest of speed and precision. Each Foreman receives the same blueprint, and must keep it secret from the rest of their team. They must then tell their teammates - without pointing, gesturing, or touching - how to arrange the game’s various wooden blocks to match the structure on the blueprint. Whichever team finishes first is then subject to a Building Inspection by the opposing team, and if everyone agrees that the building is correct, the team advances on the scoring track! The Foreman position then rotates, and the next round begins. With hundreds of cards and tons of different challenges, this game is great for builders of all skill levels. After bringing it to one of our after care classes, Lea actually suggests that for younger players, it’s a great idea to put all the kids on one cooperative team, and use the game as an exercise in communication and teamwork! Note: this game spawned some of the loudest frenzied shouting I’ve heard at Game Night in a long time. A DEFINITE party must-have!


On top of all that, Confusion is back, and we have a ton of new puzzles!

Added to our Game Demo Library this Week: After Dinner Games, Mark My Words, Relic Runners,Tumba, InStructures, Bora Bora
Posted by Labyrinth Games at 9:58 AM