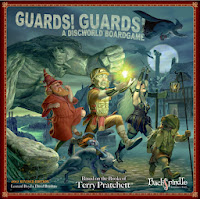 Guards! Guards! A Discworld Boardgame takes place in a dangerous time for the great city of Ankh-Morpork. As in Terry Pratchett’s book of the same name, Guards! Guards! is fraught with danger from all sides—dragons, cults, the underfunded City Watch, “helpful” wizards, and the mostly inept but highly enthusiastic denizens of the city. On top of this stew of humanity (and dwarf-anity, troll-anity, zombie-anity…), the Eight Great Spells have escaped the wizards’ university and must be returned or the city will be destroyed. Players must take on the role of characters from the book, infiltrate a guild, gather up a team of volunteers, and set out to retrieve the spells while preventing their opponents from beating them to it. Collect special skills and abilities, capture the lost spells, and pass the Wizards’ Challenges! But be careful, some of your volunteers may be cultists bent on summoning a dragon and overthrowing the city! With art from book illustrator Stephen Player, this second edition of the game solves rules issues from the first printing and streamlines this game of luck, area control, and secrets! 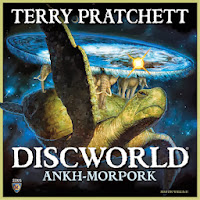 It’s a great day to be a Discworld fan: Not only is the second edition of Guards! Guards! here, but Discworld: Ankh-Morpork has returned! This game gives each player a secret role and goal, so everyone must use highly varied strategies to take control of the city. As trouble brews in the city’s many districts, players must deploy minions, thwart opponents, and live the ol’ Ankh-Morpork dream by making as much money as possible by whatever means are necessary. Shockingly easy to learn yet extraordinarily variable, Discworld: Ankh-Morpork is a great choice for Discworld fans or anyone looking for a seriously fun area control game. 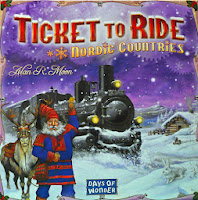 For fans of Ticket to Ride, the Nordic Countries expansion is back in the store. Following in the footsteps of the Ticket to Ride: Europe base game, Nordic Countries incorporates ferry and tunnel routes to add variety, strategy, and uncertainty to the game. Specifically designed for two to three players, this map is small and tense; rife with choke points and bottlenecks you can use to block your opponents. A high-tension iteration of the popular series, Ticket to Ride: Nordic Countries is perfect for small groups of cutthroat rail barons!

Three expansions for Carcassonne are back in the store, after being retooled by Z-Man Games. Abbey & Mayor includes several new tiles and wooden pieces, with Abbeys that act like Cloisters but do not have to match to adjacent tiles and complete adjacent features, Barns which allow fields to be scored during a game rather than at the end, and Mayors whose strength is determined by the size of the city they are in, to name a few. Count, King & Robber is a compilation of several expansions: King & Scout, The Count of Carcassonne, The River II, and The Cult, meaning that this one box can add a ton of variables to a game, or you can pick and choose which ones you want to play with. Finally, Bridges, Castles, and Bazaars brings in its eponymous structures: Bridges that allow you to continue roads over field tiles, Castles which can net you points for features adjacent to them, and Bazaars where you can auction off tiles for points. Any or all of these well-loved expansions is guaranteed to add new twists to the classic favorite, Carcassonne! 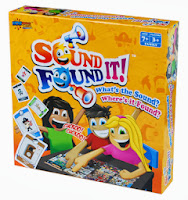 Like a combination of charades and Look Look, Sound It! Found It! is a new game for kids and families (and adults who like to get into silly arguments). After choosing a scene board—a picture of a location packed full of people, animals, monsters, lasers, cars, food, and more—one player takes the role of Sounder, and secretly chooses one card that matches with the board. Each card shows just one of the many noisy things on the picture board, and the Sounder must do their best to make the noise that goes with it! The other players must race to be the first to find and identify that object, person, or animal on the scene board. Whoever is first gets a point and becomes the next Sounder. Combine different scenes together to increase the challenge, and lay out all the scenes for the Super Sound Round! This game is also a definite candidate for the "Kids' Games that Work Great as Party Games for Adults" category: making silly noises, arguing over what kind of noise a skeleton hiding behind a tree might make, using "Nevermore" as one of the sounds for a crow—this game is as much fun as your creativity and competitive spirit can make it! 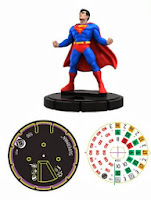 If you're interested in the popular tabletop superhero-battle game of HeroClix, but are hesitant to make a big initial investment, then the DC HeroClix Superman Quick Start Kit is the perfect thing for you! This pocket-sized set contains everything you need to start playing: figurines of Superman and Lex Luthor, both with stat cards, a Quick Start rule sheet featuring a condensed version of the HeroClix core rule book, and a map game board. The Superman and Lex Luthor figurines are specially balanced to play against each other, making this a great way for two players to use just one Quick Start set to learn to play. So, grab a friend, grab a kit, and find out just who really runs Metropolis!
Posted by Labyrinth Games at 3:20 PM