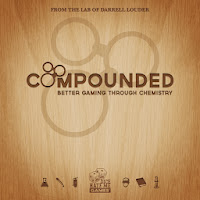 Compounded, a set-collection game for the science-minded. Playing as a scientist, you must attempt to collect the elements necessary to build your various chemical compounds. Some of these elements are acquired through pure luck of the draw, but most of them will come from trading with competing scientists. You and your competitors must work feverishly in your labs if you hope to complete your compounds before someone beats you to it...or sets your whole lab on fire with volatile chemicals! 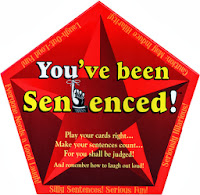 You’ve Been Sentenced! is a party game for those who can bend words to their will. Players are dealt ten pentagonal cards, each with a different word printed along every one of its five edges. Each word has a different point value assigned to it, and players must use these words to create a sentence that will get them as many points as possible. Of course, your sentence is subject to the will of your opponents: If other players think your sentence doesn’t make sense, or is just plain grammatically incorrect, they can object. You have the chance to defend yourself, usually by coming up with a crazy story that puts your sentence in context. If you succeed, congratulations! The points are yours. But if you can’t convince everyone your sentence is valid, no points for you! With 540 cards and 2,700 words, you’ll never have to make the same sentence twice. Great for big groups of adults who love wordplay, and a great way to help kids grasp sentence structure in a fun way, You’ve Been Sentenced! puts your sentences on trial! 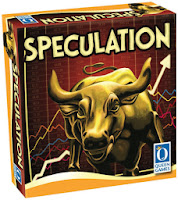 Speculation is a light stock market game perfect for those who like the feel of poker. Unlike most similarly themed games, the changing price of stocks is dependent entirely on the players' direct decisions and actions rather than pure chance. Each turn, players choose two of the stock cards from their hand, thereby changing the value of those stocks. In order to make the best choice, you must keep track of what cards are in your hand, what cards are already in the discard pile, and what stocks other people already have and will be trying to make more valuable. Of course, if someone plays a Bank Holiday, all that analysis is for nothing. With players having to keep all this in mind, the game is based mostly on anticipation of others' actions, making it feel more like real stock speculation than many other games in the genre. Speculation is a great, quick stock market game for those who are willing to play mind games to play the markets!

Campaign Manager 2008 is out of print and it's been quite a while since we've been able to find it. However, we just managed to find a few copies! By local designers Jason Matthews and Christian Leonhard, who also designed Twilight Struggle and 1960: Making of a President, Campaign Manager 2008 is a great, light political game that puts two players in charge of the turbulent McCain and Obama presidential campaigns. As campaign manager, you must try to formulate a strategy that will win your candidate that coveted seat in the White House. Draft a deck of advice to your candidate, influence voters in swing states, and target constituencies that can help you pull out a victory. Making sure your candidate’s pet issues dominate the national discussion may help shine a positive light on your campaign, but be careful; you’re treading a thin line between “Commander in Chief” and “Irrelevant Nobody”. 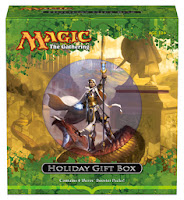 Magic: The Gathering’s 2013 Holiday Gift Box is available today! This special set includes four Theros booster packs, twenty basic lands, and an alternate-art Karametra’s Acolyte from the Theros set! The box itself can hold over 2,000 Magic cards, and comes with six illustrated dividers and a sticker sheet to customize them. If you have a Magic player in your life, or if you play Magic and want to treat yourself, the 2013 Holiday Gift Box is just what you’re looking for this holiday season!

We also have three new books for the Fate Core System RPG! The Fate System Toolkit shows you tons of ways to best take advantage of the eminently hackable ruleset of Fate Core. Packed full of ideas on how to create races and societies, as well as magical and technological gear, the Fate System Toolkit is a great way to make Fate your own, no matter what genre you're playing. The Fate Worlds books are chock-full of pre-made roleplay settings, each stocked with its own mechanics, NPCs, and story elements. Volume One: Worlds on Fire covers settings ranging from suburban witchcraft to fire fighters to WWI battle zeppelins. Volume Two: Worlds in Shadow gives you worlds full of time travel, robot knights in Camelot, and gritty noir-style mystery. With six worlds in each, the Fate Worlds books are perfect for everyone, whether you feel you don't have the time or experience to build a world of your own, or you just want to try something totally new!

Mage Wars, Mage Knight, Summoner Wars, Kem cards, and City of Horror are all back in the store. Mascarade is also back, after selling out almost instantly the first time we got it in. We made sure to get plenty more this time around, so if you wanted to get your hands on this incredibly popular hidden-role game, now’s your chance!

Added to our Game Demo Library this Week: Compounded
Posted by Labyrinth Games at 7:06 PM