Dixit Origins, also known as Dixit 4, is the newest expansion for the gorgeous and ever-popular party game Dixit. This set features 84 new cards, each featuring fantastical and surreal artwork by Clément Lefevre. Each round of Dixit challenges the Storyteller to choose a card from their hand and give a clue about it, whether by telling a story, singing a song, naming a movie, or anything else they think may help some of the other players figure out which card they chose. The rest of the players must then secretly choose a card from their own hand that they think best fits the hint they’ve been given. All the cards are then shuffled, and everybody votes on which card they think is really the Storyteller’s. The Storyteller has to be careful, though - if their clue is too obvious or too vague, they’ll end up without any points while other players rake them in! Dixit Origins is a great way to freshen up your Dixit game with more of the series’ trademark beautiful artwork, opening the door to more stories! 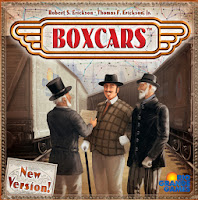 Boxcars is a reprint of one of the earliest railroad board games, and the predecessor to Rail Baron. Played on a double-sided board featuring the United Kingdom and America, Boxcars gives you some money and a train, and sets you free. Journey from city to city until you earn enough to expand your empire. Buy, build, and rent rail lines, bankrupting other wannabe railroad magnates along the way. With three different sizes of train meeple to represent different types of trains, Boxcars goes back to train gaming’s earliest routes, where money is king and shrewd strategy is the only way to get it. 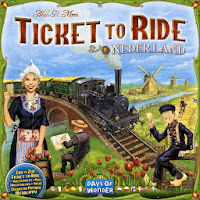 Ticket to Ride: Nederland is another new expansion available in the store today. The basic gameplay of Ticket to Ride remains the same with this new map: Players collect train cards and try to claim routes between cities in order to complete their assigned routes. Nederland adds a few twists of its own, however. Nearly every route on the board is a double route, meaning that two players can have trains running side-by-side no matter how many people are playing. Each route also has a bridge toll that a player must pay when building on that route. If it is a single track or the first train built on a double track, the toll is paid to the bank, but if it’s the second train on a double track, you must pay the player who first built there. If you can’t pay a toll you must take out a loan which will cost you points at the end of the game. With bonuses for coins at the end of the game, high-point-value tickets, and a whole new way to ruin your opponents’ plans, Ticket to Ride: Nederland adds new dimensions for Ticket to Ride fans!

Keyflower is back! A bidding, worker-placement, and city-building game, Keyflower is played over four seasons, each with its own advantages and disadvantages. As workers arrive to your new settlement, you must use their special skills to bid for tiles to add to your village. Workers can also be used to generate resources, points, and even additional workers, sometimes reaping benefits from other players’ tiles. The final round takes place in Winter, and players must decide which of their tiles to put up for auction, hoping that they themselves will not be outbid. With more tiles than can be used in any one game, no two plays of the brilliant Keyflower will ever be the same!

Click Clack Lumberjack is a quick dexterity game for the whole family. We had to open this the second we got it and have been playing it non-stop! Players stack up nine sections of a plastic tree, and then use and oversized plastic axe to swing at each section. The aim is to jostle the tree enough to knock the bark off, while not actually knocking the section out of the stack. Each section of bark is worth one point, and bark with grubs on it give you special bonuses! With tons of rule variants included, Click Clack Lumberjack is simple to learn, yet challenging and fun to play!

Bang! is a hidden-role game of deception and player elimination, and has always been a favorite at our Game Nights. Now, Bang! fans are in for a real treat: the Bang! 10th Anniversary box set! Packaged in a metal tin, this new edition of the spaghetti-Western party game contains all the base playing cards, as well as some of the most popular characters from all the expansions. The game also features special components, like wooden bullets, oversized player boards, and three brand-new characters. This deluxe edition of Bang! is the perfect thing for your next get-together - after all, a cowpoke is only as good as their gear! 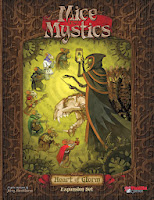 Heart of Glorm is an expansion to the cooperative storytelling board game Mice & Mystics. This new storybook picks right up where the original game ends, and features a tale of dark and mysterious forces taking root in the castle. A malicious presence has hatched a plan that threatens to ensnare Prince Colin, and puts the future of the mouse-town of Barksburg in jeopardy. The Heart of Glorm set contains new cards, counters, and figures including Neré, a wild mystic who will bring her powerful knowledge of alchemy to your adventuring party.

The Pokémon: Sylveon Collection box is the first time the Sylveon card is available to add to your deck! The set includes Eevee and all its evolutions, including Sylveon, as awesome foil cards. Also included in the box are four Black & White Series booster packs, a Fairy-type energy to power Sylveon’s attacks, and a super-cool collectible Sylveon figurine!

Added to our Game Demo Library this Week: Keyflower, Click Clack Lumberjack, Power Grid
Posted by Labyrinth Games at 11:28 AM