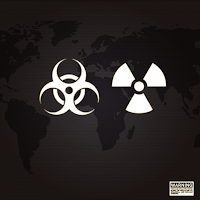 After making a huge impression at Gen Con and Essen Spiel, we are happy (yet slightly scared) to have Tomorrow in the store! Tomorrow imagines a grim near future for Earth: resources are low, the environment is changing, and the population has expanded beyond sustainability. The leaders of the world’s great powers have all agreed that the only way for Earth to survive past the next few years is to cause an immediate and drastic depopulation. As one of these leaders, you know that dire steps must be taken, but you also want to preserve your culture and maintain goodwill. Players must take part in the depopulation through face-to-face negotiations and vicious backstabbing. Very little luck is involved in this game, with all actions and outcomes depending on deal-making, deal-breaking, and strategy. Various options for different types of warfare are available, and Event Cards ensure that every game is different. This visually striking game will have you and your friends at each others’ throats for the sake of humanity’s survival! 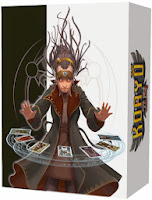 Koryŏ takes place in an imaginary steampunk universe, and its art is a gorgeous melding of clockwork, art nouveau, and classic Asian imagery. Players must choose from the families of politicians, merchants, barbarians, and more. Each group grants special abilities to the player who uses it, allowing them to draw extra cards, destroy their opponents cards, protect themselves, or draw extra influence tokens. With gameplay falling somewhere between The Great Dalmuti and Parade, players must plan carefully in order to have the majority of a type of card by the end and gain the influence points granted by the card type. In Koryŏ’s world of treachery, the best get rich while the rest are left in the dust! This game apparently sold out quickly at Essen. 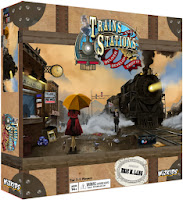 Trains and Stations is a fast-paced game of chance and strategy. Taking the part of steam-age rail barons, players must decide how to get as rich as they can before their opponents have the chance to stop them. A train game centered on a dice-building mechanic, Trains and Stations allows players to choose their own path to victory - Shipping? Monopolizing? Mining? No matter what you choose, you’ll have to interact with other players, either to work with them for mutual gain, or to undermine them for your own benefit. With 50 extremely cool custom dice, Trains and Stations is a whole new way to look at the rail genre! 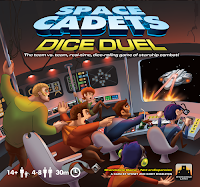 Space Cadets: Dice Duel is a departure from its purely cooperative predecessor, Space Cadets, and will be available on Friday. Pitting two teams against each other, Dice Duel is a real-time dice-rolling combat game where each player takes on the role of a specialty crew member in charge of one of the functions of their team's ship. The Helm maneuvers the ship across the map, Weapons must hurry to load and fire torpedoes, Shields must protect the ship - each ship has six stations in all, and each player must manage more than one, or become Captain and oversee everything! For four to eight players, Space Cadets: Dice Duel is a fast, frantic game of luck, skill, and tractor beams! 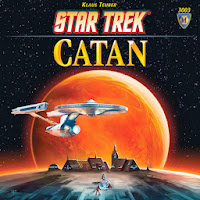 Star Trek: Catan is, as its name suggests, a re-theme of The Settlers of Catan set in the universe of the Star Trek franchise. This should be a cause for celebration for nerds of all stripes! For the most part, gameplay is identical to the original with names and graphics switched out: the traditional resources are replaced with Star Trek staples like dilithium, tritanium, and oxygen; roads are now Starships traversing the galaxy; towns and cities are Outposts and Starbases of the Federation; and the Robber is a Klingon raider. The real twist of this edition is the inclusion of an expansion previously only available in German as Catan Scenarios: Helpers of Catan. Re-themed as Support Cards, each one features a crew member from the original Enterprise, each with its own special ability. Kirk, Spock, McCoy, Uhura, and others will help you as you journey across retro-cool planets with your fleet of ships! If you like Catan, you’ll like this game. If you've never played Catan but the theme interests you, let this be your reason to give it a try!

For those who like their sci-fi in a role playing game, the Star Wars: Edge of the Empire Game Master’s Kit is back! An addition to the Core Rulebook of the RPG, the Game Master’s Kit includes a GM screen that gives the game master immediate access to useful information, as well as extra info on how to create great opponents for players. This kit also comes with a whole new adventure, so you and your players can keep expanding your own universe! The Game Master’s Kit is a great way to keep games focused and exciting, while allowing players to branch out and see what they’re really capable of! 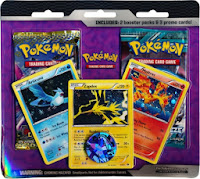 The new Android: Netrunner data pack, Second Thoughts is now available! This pack introduces new ice and icebreakers that force you to rethink the way both Corps and Runners look at the game.Two brand-new Pokémon two-packs are also here, for those with the drive to catch ‘em all! Featuring two Black & White series booster packs, three holographic promo cards of either the legendary birds of Kanto or the Swords of Justice, and a cool new coin, this set is a great way for any Pokémon trainer to add to their collection! For Yu-Gi-Oh! players, the Shadow Specters boosters will be here this Friday, and introduces the Malicevorous, Tanuki, and Ghostrick archetypes from the ZEXAL anime. Along with all that, we have reprints of the classic game Sorry!, featuring the original artwork from the 1930s version of the game. Including rules for variations such as Partnership Sorry, Point Sorry, and Sorry for One, this is the perfect way to go back to your gaming roots! 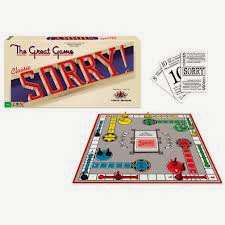 Added to our Game Demo Library this Week: Koryŏ, Even Steven's Odd, and Architecto puzzle
Posted by Labyrinth Games at 4:45 PM