Escape: Quest contains two new expansion modules for everyone's favorite frantic dice-rolling adventure game, Escape: The Curse of the Temple. The Quest module places strange new challenges into the temple, and players never know when they might be coming. Adventurers may have to face ghosts, steal gems from an ancient obelisk, or make offerings of gold to the Tree of Life. Character cards allow players to become one of six different characters, such as the Mechanic, Dark Priest, and Mentalist, each of which has its own unique abilities to choose from. These new expansions can be added to the base game on their own or together. Include previous Escape expansions for a truly wild adventure! 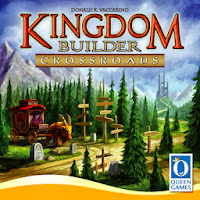 Kingdom Builder: Crossroads is a new expansion for the Spiel des Jahres-winning game Kingdom Builder. Crossroads introduces four new terrain types, two new locations, and Task cards, which add new ways to score along with the classic Kingdom Builder cards. There are also new location abilities, including the Warrior which prevents anyone from building nearby, the movable Wagon, Ships that can sail across the water, and City Halls that count as seven settlements. Introducing a slew of new challenges and options to the subtle, classic game of Kingdom Builder, Crossroads is a great addition for any board game fan.

The Three Little Pigs is a light dice game for players who like building as much as they like destroying. As we all know, little pigs love nothing better than building strong, wolf-proof houses, so players roll dice and attempt to collect symbols to trade in for doors, windows, and roofs for their homes. The more of each symbol you roll, the better the material you can use to build your new house, so you’ll want to push your luck and try to get strong brick instead of straw! However, some of the dice also feature Wolf symbols, and if you get two of those, you must choose another player and attempt to blow their house down! Allowing you to play as both hero and villain, The Three Little Pigs is a quick game of luck and strategy for all ages! 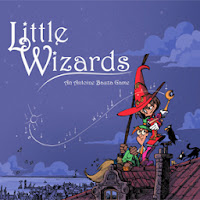 All kids love to imagine and play, but formal role playing games can often be too much for little ones to take on. Little Wizards is an RPG specifically designed for kids aged six through ten, as well as adults who want to share in the magic! Originally designed by Antoine Bauza, creator of award-winning games such as 7 Wonders and Hanabi, and updated for the English translation by Amanda Valentine, veteran of the Best Game ENnie Award-winning Dresden Files RPG system, this little game has a serious pedigree. Focused on imagination, storytelling, and cooperation, Little Wizards takes places on the two-sided planet of Coinworld. One side of the flat planet is beautiful and bright, while the other is dark and eerie. Players can explore both sides of this magical world, using their Body, Heart, and Brain traits to build magical characters. The game comes with three pre-made Tales that an adult Narrator can guide young players through in just an hour or two. A fun, explorational game for young role-players, Little Wizards opens the door to a magical world. 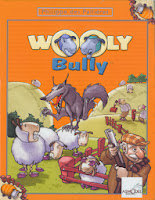 Wooly Bully is a tile-laying game with a strategic element and polka-dotted sheep. Each player is secretly dealt a color assignment along with a hand of playing tiles. Much like Carcassonne, players must place tiles such that the edges match up perfectly with any other tiles they touch. But unlike Carcassonne, players also get to draw several tiles each turn, allowing them to plan and strategize rather than relying entirely on luck of the draw. Players attempt to build enclosures that include as many sheep of their own color as possible. The enclosures can be made by placing fences, cities, or even forests, though there is a danger lurking: the Wolf may creep through the trees, and eat the sheep in the enclosures that touch it! Unless, of course, you have a hunter to protect your flock. Keep your color secret until the opportune moment to grab bonus points, and defeat  the Wooly Bully! 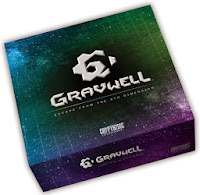 When the designer of Gravwell: Escape from the 9th Dimension came and demonstrated the game recently, every copy flew off the shelves! In Gravwell, your four spaceships have survived the passage through a black hole, but you have found yourself in a new dimension where gravity behaves in strange ways. Out of fuel, you and your opponents must draft cards to harvest basic elements from space dust and asteroids in an attempt to move your ships. Using this manufactured fuel and the gravitational fields of the objects around you, you must navigate back to the Warp Gate that will bring you back to your home dimension. Slingshot around the gravity of your opponents, as well as the wrecked ships that have tried this journey before, and be the first to make it back through the Warp Gate. Gravwell is a fast, easy-to-learn game for one to four players with the guts to brave the ninth dimension!

And after the holiday rush, we have a lot of re-stocking to do! Games returning to the store this week include: Trains, Sherlock Holmes Consulting Detective, Formula D, Mice and Mystics, Unspeakable Words, and Tammany Hall.
Posted by Labyrinth Games at 11:46 AM