This is the fourth article in our series on learning through non-electronic games. Our first article covered cooperative games, our second article focused on games that promote fine motor skills, and the third focused on early math games. The idea behind this series of articles is to explain some of the concepts that we address during our educational outreach efforts, like after-school game clubs, as well as provide our readers with the names of some great games and puzzles.

Happy Presidents’ Day! School may be off on the 17th, but we have plenty of great American history games and trivia to keep kids busy and learning throughout the long weekend.

Did President William Howard Taft’s wife call him Prince Charming, Sleeping Beauty, or Sinbad the Sailor? You can find the answer in BrainQuest’s Presidents deck of trivia questions. All of the cards are connected so they can fan out rather than fly apart, making these trivia decks great for travel. For more questions about American history, check out the America deck or the Black History deck. 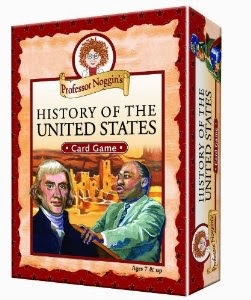 For more competitive quizzing, try the Professor Noggin card decks. Each card has a category on one side, such as “World War II” or “Boston Tea Party.” On the other side are three easy questions and three hard questions that may be multiple choice, true or false, or open answer. The answers are written to the side of the card, so even though the game is meant for 2-6 players it is possible to quiz yourself by simply covering the answers. The Professor Noggin’s series of educational card games includes several American history decks including American Revolution, History of the United States, and Presidents of the United States.

For children in middle school or older, there are several strategy games that give history lessons a new spin. Early American Chrononauts covers important events between 1770 (Tea Exempted in Tax Repeal) and 1916 (“Star Spangled Banner” Becomes National Anthem). As in the original Chrononauts, players act as time travelers who each have secret goals of changing history or collecting a set of artifacts to win the game. Also, while both original Chrononauts and Early American are stand-alone games, they can be combined to make the huge game of ÜberChrononauts. 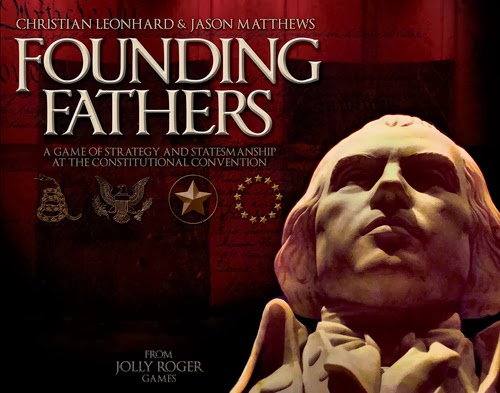 Catan’s Settlers of America:Trails to Rails has players reenact westward expansion from the time of the Oregon Trail to the construction of the first transcontinental railroad. Founding Fathers has players take the role of the delegates to the Constitutional Convention of 1787. Each founding father has an agenda that they are trying to include in the final draft of the Constitution, and they can use cards to debate and cast votes in order to reach their goals. For each issue up for debate, you may choose to support the version that made it in to the Constitution or an alternate version that nearly took its place!

One of our most in-depth historical games is a new cooperative game called Freedom: The Underground Railroad. This game gives a thorough history of the Abolitionist Movement in the United States from 1800 to 1865 and each card contains interesting related details. Because of the realities of life during this time period, this game deals with darker themes than most and should not be taken lightly. It is recommended for ages 13 and up, and while the basic rules make the game quite difficult to win, there are several adaptations to decrease the difficulty.


Below is a list of other American history game and puzzles that we love. However you choose to enjoy the holiday weekend, make sure to keep your brains active!

Posted by Labyrinth Games at 4:26 PM