Geek Out! is the trivia game for the nerds of the world. We played last night at game night, and it was tons of fun. Rather than covering aspects of general knowledge, Geek Out! focuses on themes like Sci-Fi, Fantasy, Comic Books, Games, and Miscellaneous, and each category covers a wide range of topics. For example, the Comic Books category covers traditional comic books as well as manga, comic strips, and graphic novels, while a Games question is just as likely to be about video games, tabletop RPGs, or board games. Each question challenges the active player to come up with a list of things in a category, for example, four named fantasy swords, six Shakespearean characters, or four action movies starring Arnold Schwarzenegger. The active player rolls a die to determine the category for their question, reading it aloud to the group. The bidding then begins with the start player and continuing clockwise with each person saying how many of that thing they can name, upping the ante if they feel they can name more than the previous bidder. The winning bidder gets to answer the question, and gains one point if they’re correct. But if you get it wrong, you must take a negative-two-point chip! Packed with over 1,000 challenges, Geek Out! is the trivia and bluffing game for those of us who are proud to let our geek flag fly! 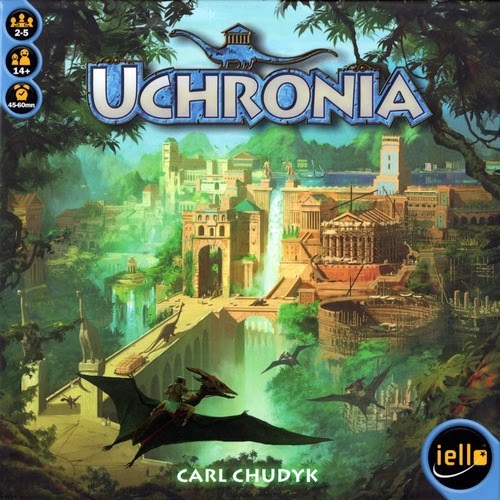 Uchronia is very similar to the popular but difficult-to-get game Glory to Rome. In fact, Uchronia was designed by Carl Chudyk, who also worked on Glory to Rome as well as the Innovation series. Uchronia’s art and theme are any kid’s dream: Humans and dinosaurs coexisting together in a fantastical landscape. You take the part of the leader of one of the great noble houses of Uchronia, who must expand and enrich the city while winning over its people. Use your various cards to implement resources, trade, and of course, construct buildings. Once you finish a building, it grants you special powers for the rest of the game. If you plan right and keep a close eye on the Great Works cards that can be grabbed by another player at any moment, you may become the most powerful force in Uchronia!

The New Netrunner pack, Fear and Loathing is also now in stock.

And finally, we also received the Adventure Time: Card Wars - Finn vs. Jake deck, but it has already sold out. We will hopefully be getting more next week, as well as the other deck, BMO vs. Lady Rainicorn!


Added to our Game Demo Library this Week: Geek Out!, KaBAM!
Posted by Labyrinth Games at 8:06 AM