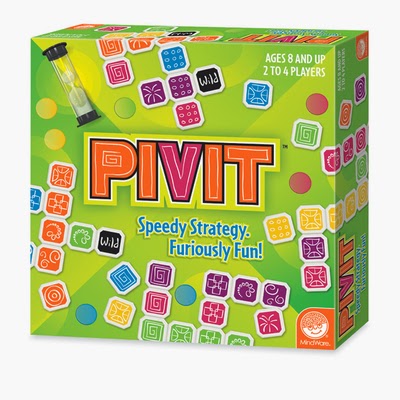 Pivit is a fast and colorful game that combines the patterning of Qwirkle and the frantic speed of Bananagrams. Each player begins with 24 tiles printed with various colors and designs, and then the race begins! Players must attempt to arrange their tiles in a crossword-style grid where each row must have at least three tiles and consist of all the same color or design with no repeats. If a player finds that they are stuck with tricky tiles, they may use trade tokens to swap out for new random tiles up to twice each round. All players will be hoping for Wild tiles, which can go anywhere! Whoever can correctly place all their tiles first gets to snag the most points, but they may have to give them all up if anyone notices a mistake in their grid. Combining great elements from several popular games, Pivit is a challenging race for players of all ages! 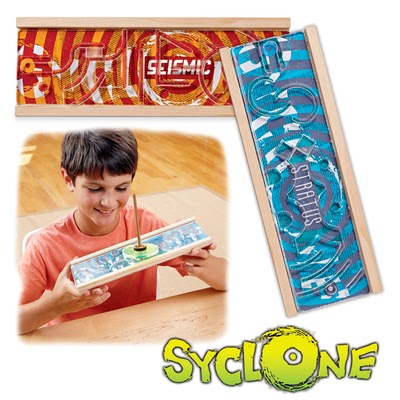 Syclone is a cool and addictive new dexterity puzzle from MindWare. At first glance, Syclone is very simple, consisting of a wood-and-acrylic top and a double-sided maze board, and all you have to do is get the spinning top from the beginning of the maze to the end. The precision-engineered top can happily spin for over a minute, assuming you can keep it on track with all the walls, pitfalls, ramps, and jumps in its way. The easier side of the maze board, called “Stratus”, has three paths you can choose from, each with its own difficulties. Have you ever tried to steer a spinning top up a ramp less than an inch wide? The other side, “Seismic”, has only one path, but that should be enough of a challenge for anybody: a raised section means there’s nothing keeping you from sliding off the board altogether, and you have to make several jumps. With all its tricky twists and turns, the Labyrinth staff haven’t been able to put Syclone down! 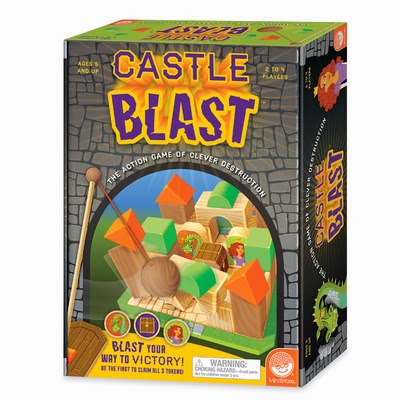 Castle Blast is another dexterity game, but this one involves taking a wrecking ball to a castle! Players take turns attempting to knock down the castle walls so they can reach the three special blocks inside - the dragon, the princess, and the treasure. If a player manages to knock one of those special blocks off the board they earn a matching token, and whoever gets all three tokens first is the winner! With a mix of precision and chaotic, noisy destruction, Castle Blast is a great game for anyone who dreams of storming the castle and saving the day...with a wrecking ball! 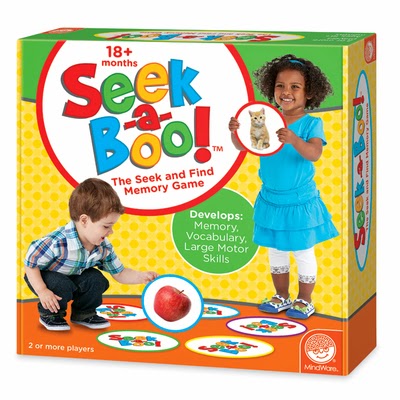 Seek-a-Boo is a game that helps toddlers develop their vocabulary, memory, and gross motor skills. The game contains several categories of cards, such as Food, Clothing, or Toys. Oversized circular cards in the selected category are placed face-down on the floor while an adult holds a smaller set of matching cards. As the adult chooses cards from their hand, they encourage the child to look under the face-down cards until they find all the matches. Seek-a-Boo has tons of room for variation based on the child or children’s ability level; you can mix card categories, create your own vocabulary groupings, or even switch roles with the child and let them tell you when you get a match right! 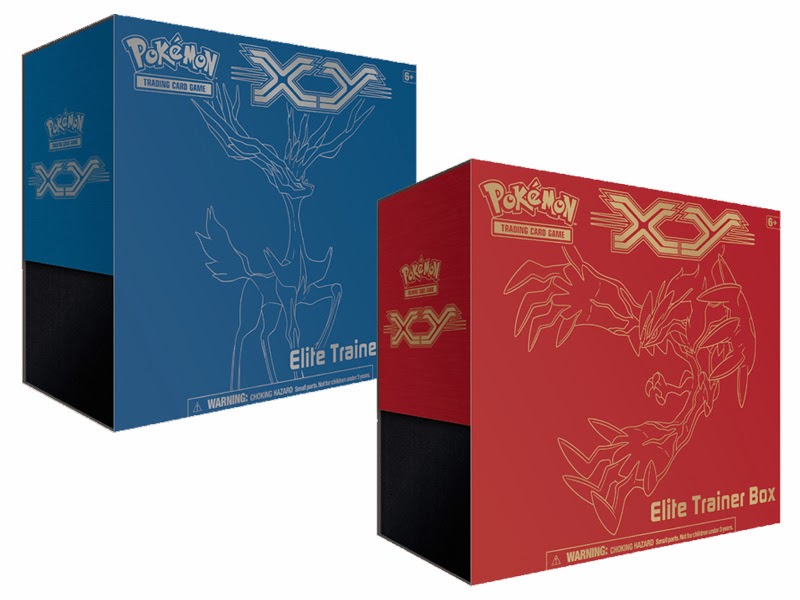 For all the Pokémon trainers out there, the new Pokémon XY theme decks and boosters are here! These decks will include the all-new fairy-type Pokémon and Basic Fairy Energy cards! Pokémon XY Elite Trainer Boxes are also available. The blue Xerneas box and red Yveltal box each contain eight booster packs, 45 Energy cards, special condition markers, damage-counter dice, and a coin-flip die. They also include card sleeves and dividers so you can store everything neatly in this special collector’s box! Elite Trainer Boxes are the perfect thing for any Pokémon player looking to upgrade and organize their collection. 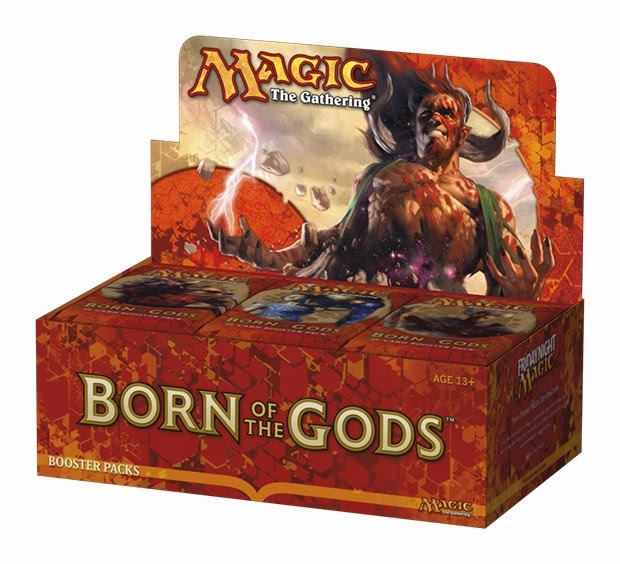 Magic: The Gathering’s new set, Born of the Gods, will be released on Friday! Booster boxes and booster packs will be available, our first Born of the Gods draft will take place on Friday night, and our casual Sealed Deck League will start up again on Tuesday featuring the new set of cards! As usual, we will be selling full booster boxes at 25% off MSRP, so be sure to come in and pick up some new cards from the pantheon of Theros! 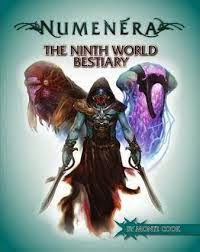 Monte Cook’s RPG Numenera is expanding with The Ninth World Bestiary. This 160-page hardcover is a gorgeously illustrated guide to some of the most notable creatures and characters of the world of Numenera. Packed with helpful tips for how to use and introduce each beast and personage, it’s an invaluable aid for any Numenera GM. Expand your world and challenge your players with creatures like singing dinosaurs with powers over the mind, a glass automaton controlled by insects that crawl inside it, and mysterious children who are more than they seem to be...

State Smarts is a new geography and trivia game by local company Orange Line Games. The game consists of 94 cards, each with different trivia about the various states of America. For example, one card tells you which states are home to the most venomous snakes, another lists the states that share their name with a river, and another says which states have been the location sites for the most dinosaur fossils. Of course, there's lots of overlap throughout the deck, and that's exactly what you need. Your aim is to gather sets of three cards that share a state in common. Of course, cards with fewer states on them are worth more points, since it's harder to find a match. With a mix of luck, strategy, and geographical know-how, State Smarts is a quick card game full of surprising facts!

Along with all that, we got some great new crossword puzzle books, a new extreme dot-to-dot book featuring scenes from U.S. history, beautiful new puzzles from Djeco, and the historic Isle of Lewis chess set is back!