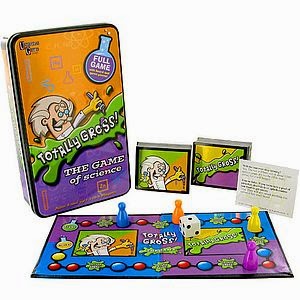 Totally Gross has been a very popular game for burgeoning young scientists, or for anyone who loves all things icky, creepy, and gross! Now, the smaller Totally Gross Game Tin makes the disgusting yet educational game perfect for travel! With questions about chemistry, biology, zoology, and more, the game challenges players to answer questions as well as take part in revolting science activities and experiments. Can you milk a snake? Are bullfrogs cannibals? What is snot made of? Answering questions like these will help you move around the board and be the first to earn ten points. Totally Gross Game Tin helps scientists of all ages learn about the world while totally grossing each other out! 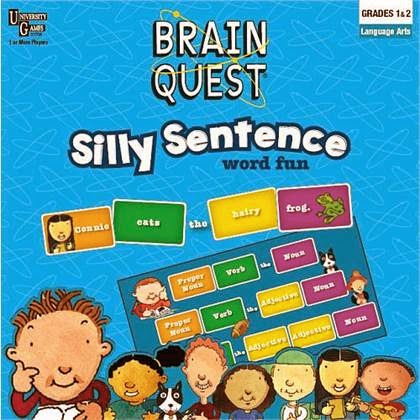 Brain Quest has put out two exciting new games. Brain Quest Silly Sentence Word Fun helps players learn the different parts of speech by challenging them to build crazy sentences. A spinner determines whether the player has to use a noun, proper noun, verb, or adjective. “Wild” means they can draw a card from any pile, and if the card is blank, the player can write in their own word! The last player to draw a card gets to read out the goofy, Mad Libs-style sentences that everyone has created. Silly Sentence Word Fun teaches sentence structure and parts of speech, all while letting kids be as goofy as they want to be! The other new game Brain Quest Smart Game tin is full of challenges tailored to specific grade levels. Players answer questions about science, arts, math, reading, and The World, and earn letter tokens as a reward. The first player to spell SMART is the winner! 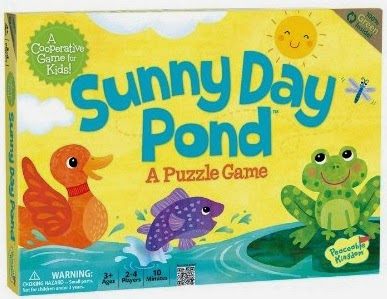 Sunny Day Pond is a new cooperative game by Peaceable Kingdom. Three animals - Duck, Fish, and Frog - are trying to have a fun day at the pond, but the rain could start at any moment and ruin the party! Players must help each other to build the three animal puzzles before the rainstorm begins. A spinner determines which puzzle the active player can add to, whether they can choose any puzzle piece they like, or if a raindrop falls from the sky. Players help each other choose the right pieces and assemble the puzzles, and everyone gets to make animal noises! If you can put together all three puzzles before the six raindrops come down, everybody wins at Sunny Day Pond!

Mad City is a tile-laying game where it’s up to you to plan and build a city! Race against other planners to arrange your city tiles into Residential, Urban, and Industrial zones.The scoring system allows you to decide whether you focus on a certain type of zone or diversify your city, but be quick about using all the tiles in your hand! You may boast about certain parts of your city, such as your roads or communities, and if yours truly are the best, you’ll get bonus points for your parks and ponds. On the other hand, if someone has done a better job than you, they’ll snag the extra points instead! Be careful what you brag about, and move quickly to beat your opponents, or play solo against The Grid to become the most efficient city planner in Mad City. 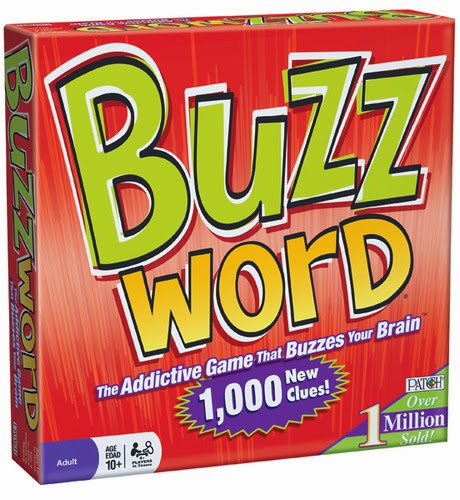 Buzzword and Buzzword Junior are classic party games where two teams compete to find the winning words! On your team’s turn, one team member chooses a card and reads the “buzzword” from the top corner. Your team then has 45 seconds to solve the ten clues, where each answer is a word or phrase that contains the buzzword. For example, if the buzzword is “Tooth”, a clue might be “A bristled tool used for cleaning”, with the answer being “Toothbrush”. Don’t take too long on any one clue though; the opposite team will be keeping track of every clue you miss, and making sure you don’t get more than 45 seconds to think! With easy, medium, and hard clues on each card, Buzzword and Buzzword Junior are sure to get any party buzzing! 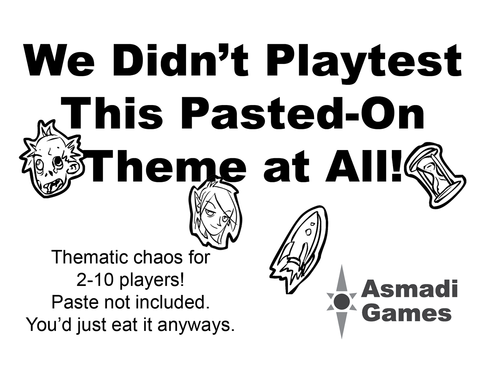 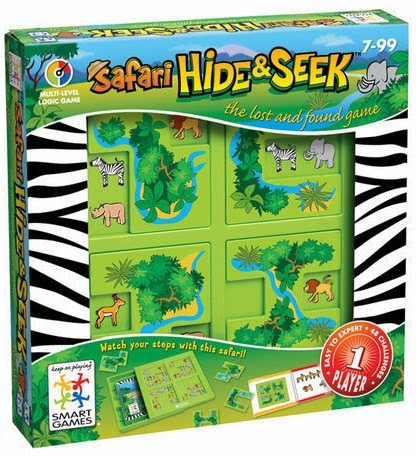 Safari Hide & Seek is just the thing for kids who love animals and puzzles! The game board displays herds of elephants, rhinos, zebra, antelope, and a pride of lions, and comes with a challenge book and four puzzle pieces of different shapes. Each of the 48 challenges tests your spatial abilities by asking you to lay the puzzle pieces on the board such that only a certain set of animals remains visible. The pieces fit on the board in hundreds of different ways, but each challenge has only one solution! Hide some animals and let the others roam free with Safari Hide & Seek! 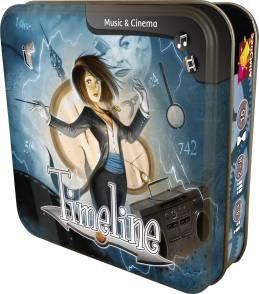 The makers of the popular Timeline series have added two new games to their lineup! Timeline: Music and Cinema is the latest addition to the Timeline family, with 110 cards featuring significant events in the history of the arts. Each card features an artistic achievement such as a movie, song, ballet, or opera, and you must try to correctly add your cards into the timeline one by one. The back side of each card features the year in which the piece was premiered, so once you make your decision, flip the card to see if you were right! If so, you’re one step closer to winning, and if not, you must draw a new card. It’s easy to learn, but addictive and surprisingly challenging to play! As with its predecessors, Timeline: Music and Cinema can be combined with any other games in the Timeline series for a bigger challenge! 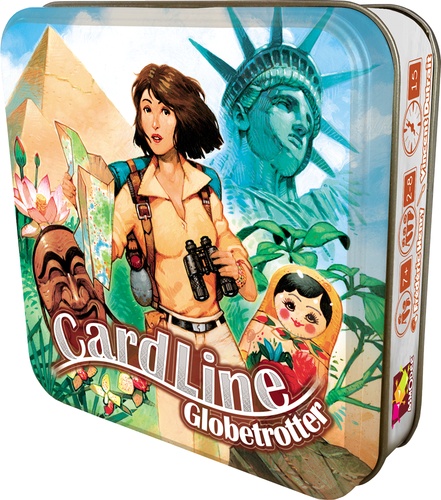 Released by the same designers, Cardline: Globetrotters, is played similarly to Timeline in that you begin with a hand of cards, and win when you can correctly place them all into the line in order. However in this version of the game, each card features a country, and the back of each tells you that nation’s size, population, GDP, and pollution level. At the beginning of the game, players agree on one trait to focus on. One card is revealed to begin the tableau, and players then take turns trying to place their cards in order. Is France bigger than the Seychelles Islands? Does Guatemala have a bigger population than Russia? With so many countries and traits to compare, Cardline: Globetrotters will never be the same twice! 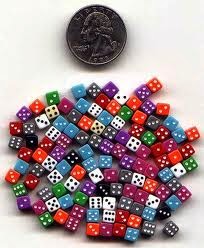 If you’re looking to change up your gaming experience, why not try some new dice? We got a bunch of crazy new models this week that you’ll have to see to believe. Jumbo translucent d20s, nested dice that allow you to roll two d12 in one throw, big foam dice, HUGE foam dice, spherical dice (yes, really), and itty-bitty d6’s that would look at home decorating a cupcake are just some of the crazy new models we’ve received! We also have cool new educational dice that help teach fractions, geography, money, math and spelling! 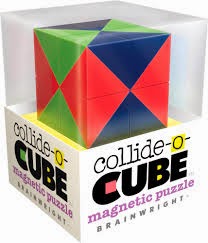 Once again, we got a crop of cool new puzzles this week! The Collide-o-Cube consists of eight cubes, all of which appear identical on the surface. However, each one is packed full of magnets which will repel and attract in unexpected ways. Your task is to match one of the 28 patterns provided, so try to make the magnets click if you can! Geobrix is a set of 13 brightly-colored geometric shapes that fit together in innumerable ways. Take them out of their tray and try to fit them back together in one of the 18 different solutions, use them to build 20 different 3-D objects, or try to use them to construct a cube for the ultimate challenge! Roundominoes is a beautiful brainteaser comprised of curved, colorful shapes. The laser-cut acrylic pieces can be used to play three different games for up to two players, or you can use them to make dazzling free-form patterns! 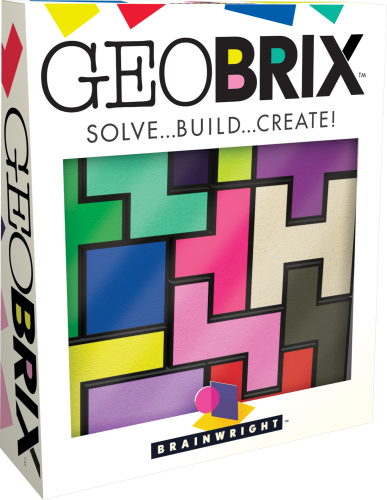 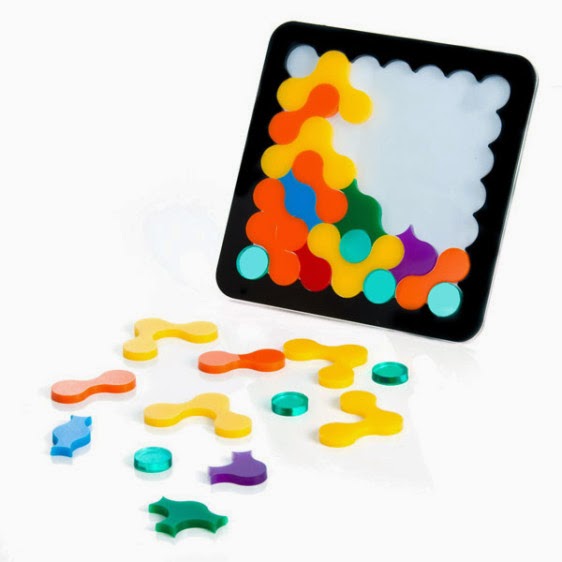