by Becky "Made Entirely of Gears" Topol 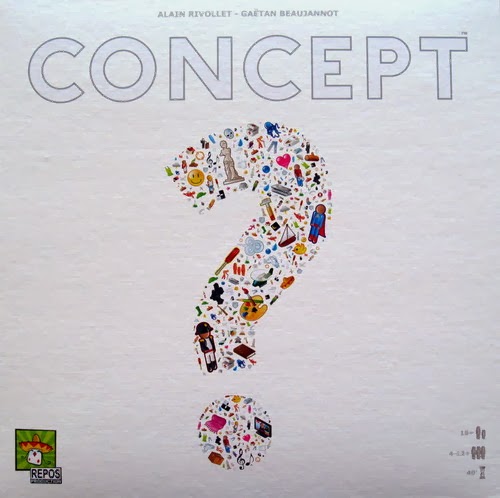 Concept is a unique game of communication and interpretation. One team draws a card and chooses a word or phrase, which they must then get other players to guess. The only way to communicate is via a board covered with various universal icons. By placing markers on these icons, the active team must try to get the other players to guess their word. Trying to communicate the title of the movie Titanic? Maybe you’d place your Main Concept marker on the movie icon, and another on the boat icon.  A subcategory about the character Jack Dawson could use markers on the icons for man, wet, cold, and dead. Rose could be described with woman, money, love, and sad. With over 900 topics to describe, and more than 100 images, symbols, shapes, and colors to choose from, Concept is a mind-bending game where the whole is always greater than the sum of its parts! 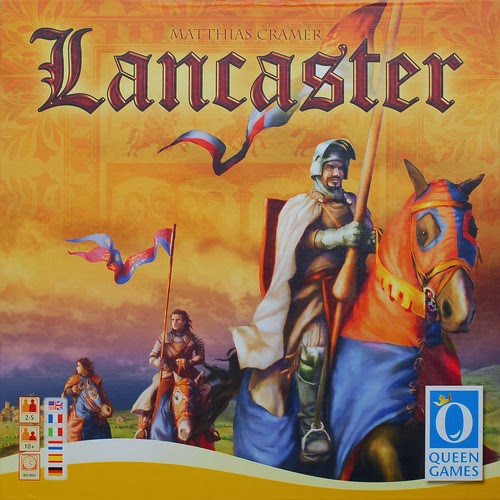 Lancaster is a Euro-style worker placement game where the outcome of the Hundred Years’ War is in your hands. Young King Henry V has ambitious plans to unite England and conquer France, but he will need the support of noble families to realize his plans. Proving yourself a loyal and useful ally to the king has many benefits, but is no simple task. You must cleverly deploy your knights to defeat not only the French, but the other English lords who hope to steal glory away from you! In the English counties knights compete for the valuable favors of nobles; in your castle they earn you money; and in France they must combine their powers with your opponents’ knights to battle the French. New rules may be voted into effect which benefit some players, thereby rewarding their strategies while also making them a target. With beautiful high-quality components, Lancaster challenges you to gain power, even of you have to destroy everyone in your path. 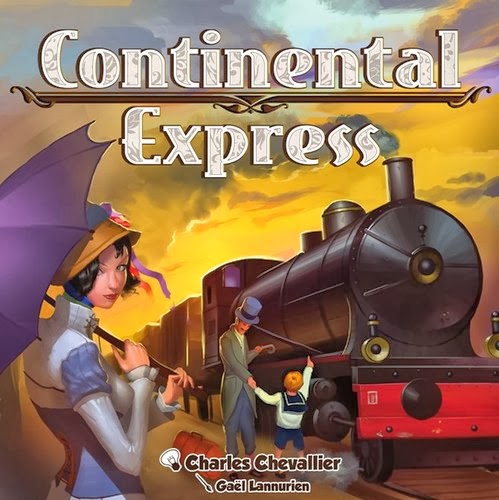 In Continental Express, players are train station managers competing for train cars in the hope of completing their own secret goals. Based on hidden contracts, players try to collect groups of icons based on certain criteria. The game is based on set collection and card drafting, with the ever-present temptation to take more cards for a higher price. Characters give you special actions you may take, such as grabbing a company token of your choice, or stealing all the money from any player. Since completed objectives as well as money count for points at the end of the game, you have to play it smart in Continental Express! 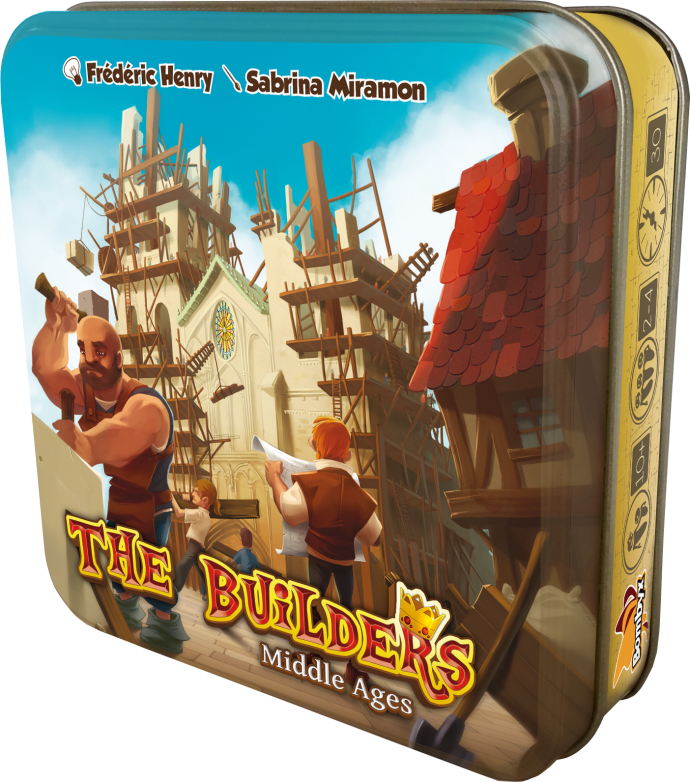 The Builders: Middle Ages is a small, card-based worker placement game where players must juggle workers and resources in order to complete buildings and machinery. Buildings are chosen from a central pool, with each building card telling you what resources you must pay to complete it. Workers are necessary to complete these structures and earn you points, but they certainly won’t work for free. Machines, once completed, act like specialized workers but don’t need to be paid! Easy to learn and quick to play, The Builders: Middle Ages is a compact game of fast fun! 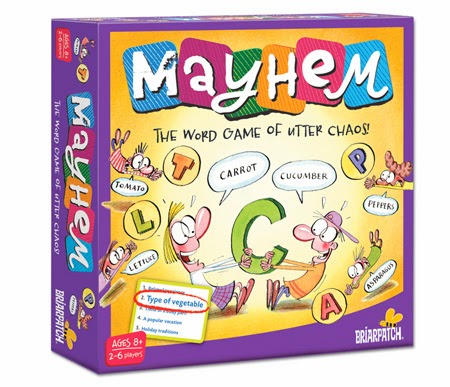 Mayhem is a family word game that lives up to its name. You begin with a simple board scattered with letter tokens, then a category card is drawn and the race is on! For whatever category is chosen, players try to blurt out as many words in that category as possible, while snatching the first letters of those words off the board. Not every letter of the alphabet may be present, so you have to be smart as well as quick! The word “carrot” won’t do you any good in the “Vegetable” category if the letter C isn’t on the board, but if it’s there you get the point as long as you can grab it first. After ten rounds, the player with the most tokens wins, so get your vocabulary ready and you may become the master of Mayhem!

Flip Flops is a frantic game of Hawaiian-themed chaos! After being dealt a hand of five cards, players race to collect sets where nothing matches. The cards are covered in bright swim trunks, surf boards, sunglasses, and flip-flops, in groups of various sizes. You must scramble to make groups of two to four cards where each features a different object as well as a different number of objects. Once a group has been made, you can lay it out on the table, but be careful! Your opponents can steal cards that are out in the open in order to make sets of their own! 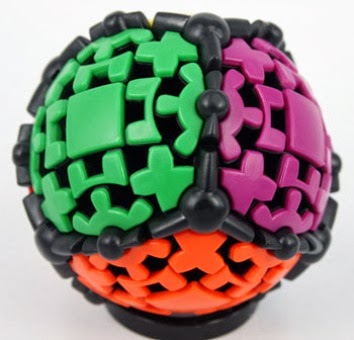 We also got a on of great new mechanical puzzles this week! Pyraminx is very similar to the traditional Rubik’s Cube, only pyramid-shaped for a whole new challenge! Another cousin of the Rubik’s Cube is Meffert’s Gear Ball. Your goal is to get each side of this rounded cube to be one color, but the whole puzzle is made up of interlocking gears which move and interact in complex, changing ways. The Gear Ball looks, feels, and sounds extremely cool, and poses a fascinating new challenge. 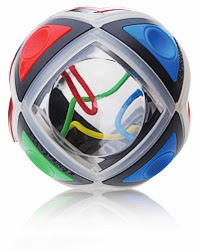 The Brainstring R is another interesting new puzzle of twists and turns. Roughly spherical in shape, the Brainstring R contains four brightly-colored elastic strings which can be seen through the ball’s clear panels. Twist the interlocking sections of the outer shell, and the strings inside tangle into a knot, which you must now solve! It sounds simple, but the Brainstring R is difficult and addictive!

And finally, we’ve received Cubebot! Inspired by Japanese Shinto Kumi-ki puzzles, Cubebot is a small wooden puzzle toy in the shape of a robot. With strong elastic “muscles”, Cubebot is endlessly poseable, though the real challenge of Cubebot is folding it into a cube! Available in a rainbow of bright colors, Cubebot is the perfect companion any time you need a pocket-size puzzle to play with! 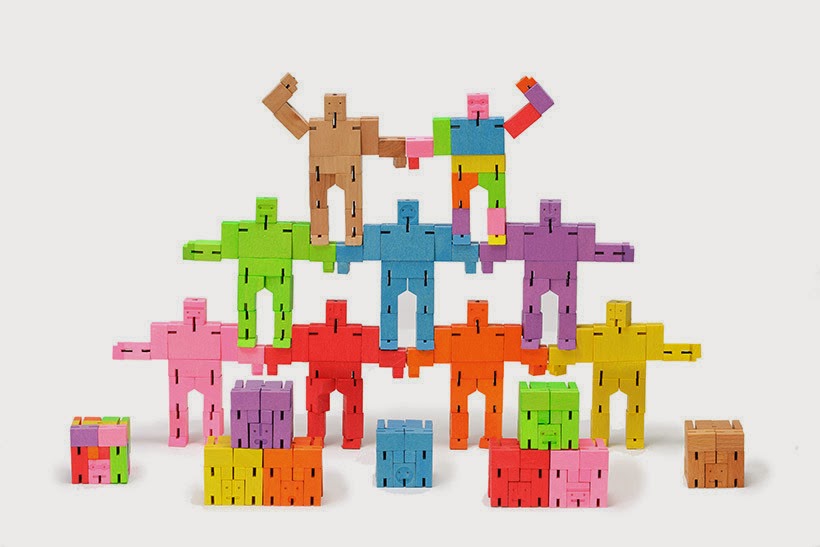