by Alexander "So Many d6" Smith

In My First Carcassonne (an updated version of Kids of Carcassonne), players are in for a wild day of excitement as they lay down tiles and complete roads for their characters. If you're familiar with the winner of the 2001 Spiel des Jahres, Carcassone, then you'll love this large tile and child-friendly version. Gameplay is boiled down to completing roads and with all four sides having connecting roads, this is a snap! The real challenge lies with placing down all your meeples (also larger than in Carcassonne) on tiles with characters matching your color. Make sure you're completing roads that will help you and watch out for other players placing tiles with their character on the same road as you! My First Carcassonne is a perfect introduction to strategy games. You should definitely give it a try! 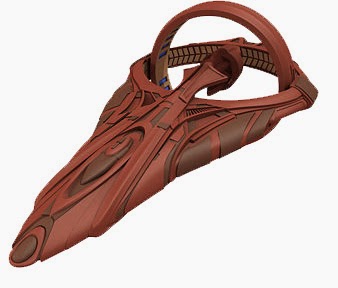 The new Wave 5 Star Trek: Attack Wing are here and now you can add the Borg Tactical Cube 138, Bajoran Interceptor 5 and Vulcan D'Kyr to your collection! With a variety of new upgrades, crewmembers and missions to complete. Will you try your hand at rescuing a Vulcan crewmember with with D'Kyr from a Federation ship under attack? Or will you try to deliver a nanovirus that allows Borg drones to retain memories of their past selves before the Cube starts its Self-Destruct Sequence? Whatever you do, I wish that you live long, and prosper.

What architectural feats of majesty can you accomplish when it means the position of Grand Vizier is on the line? In Sultaniya you will stretch the bounds of wonder in your quest to build the most impressive palace. By connecting tiles to their existing structure, players try to score points by completing four visible objectives and two hidden objectives. By earning sapphires, you can enlist the help of the Djinn and secure your future as the Grand Vizier of Sultaniya!

An updated version of the 1986 Russian political intrigue game by Fata Morgana, Kremlin has players secretly rank politicians who will take actions that benefit whomever has the most control over them. If a politician that you have under your thumb is party leader for 3 years in a row and is able to wave to the crowds at the October parade, you win! But be careful, as politicians perform actions they age and are suspect to illness and death. Wade through the intrigue and backroom dealings and fill the power void in the Soviet Politburo world of Kremlin!

For restocks, this week we've received the 2010 Golden Geek Best Card Game winner: Innovation. One of our favorites! Build your own civilization and score achievements by developing groundbreaking technologies, cultural advancements and taking advantage of the innovations of others. Now is the perfect time to change the world with your Innovation.

Posted by Labyrinth Games at 7:49 AM