by Alexander "Totally on the Red Team, Just Trust Me" Smith 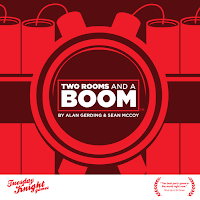 Two Rooms and a Boom is a party game for 6-30 people split between two rooms. Each player is given a team and role that they keep secret, but can share with others if they so choose. At the end of every round, each room decides on which players will go to the other room in a hostage swap. The red team is trying to get the bomber in the same room as the president while the blue team is trying to keep the two apart. With tons of interesting roles, this is one of the best new party games out there. 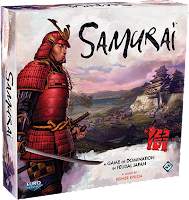 Samurai is a classic tile-laying game by Reiner Knizia where players take the role of daimyos vying for control of Japan. As the map is filled with tiles, tokens that have been surrounded will be awarded to the player who has gained the most favor with the corresponding group. Become allies with the various clans, religious leaders and peasants in your journey to conquest. The new edition includes updated art and minor changes to the game's components. 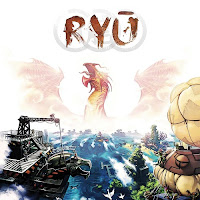 In RYŪ, you are one of five humanoid species racing to assemble a living spaceship. Players will move from island to island gathering resources to build their RYŪ ship, and each island offers unique advantages and disadvantages. Cooperate and trade with others to create mutually beneficial relationships, but don't give your rivals too much help! Aim for the stars in this very accessible resource game.

Love 2 Hate is a party game for adults where you and your friends finish sentences about why you might love or hate something. How will your friends explain their love for moist towelettes? Or why they hate pizza? You're sure to get tons of laughs and learn a bit more about your friends with this crazy card game. 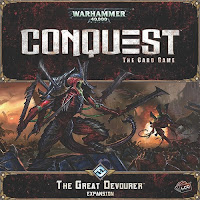 Warhammer 40,000: Conquest - The Great Devourer is the first deluxe war pack for the Conquest LCG. Channel the alien swarm and devour all who oppose you with the "Old One-Eye" and "The Swarmlord" warlords. In addition to a normal warlord, the Tyranids have a new special unit - the synapse unit. Be sure to get ready for all the new units, supports, and events waiting for you in this exciting new expansion! The Yu-Gi-Oh 2015 Mega Tin is out and now's your chance to get your hands on some new rare and powerful cards. Each tin includes four booster packs from recent sets, three 2015 Mega Tin packs and a slew of thematic Secret, Ultra, and Super rare cards.

Code of Nine is a game where each player plays as an automaton dutifully carrying out tasks long after the downfall of the human race. Each player has two memory cards which determine how victory points are scored. Gather relics of the past to perform your duties or peek at the memory cards of others, piecing the puzzle together in this very thematic deduction game.

Meteor is a real time cooperative board game where you must work with other players to blow up meteors and save humanity. Work to gather up resources, build rockets and launch them at the incoming meteors before what could be Earth's last five minutes are up! 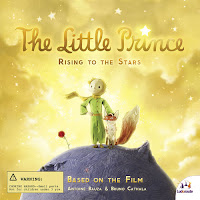 Designed by two famous game designers, Antoine Bauza and Bruno Cathala, The Little Prince: Rising to the Stars is a beautiful point-to-point movement game. Visit clouds in your biplane, gathering stars and triggering story events. Visiting people or getting to certain places first can earn you stars, and the person with the most stars at the end of the game wins! 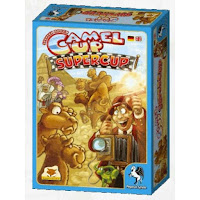 Camel Up: Supercup is the first expansion for the 2014 Spiel des Jahres award winner, Camel Up. In addition to adding a ninth and tenth player to the game, the expansion comes with four modules to increase the excitement of camel races. Now you can bet on relative positions, collaboratively bet with a partner or bet on which camel will be the most photogenic. Additionally, there is a new extended race track, as well as support dice which make the outcome of the wacky race all the more wild. 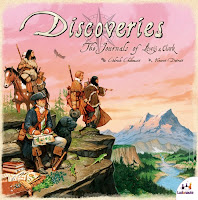 Discoveries is a dice based game of embarking on journeys and gathering information on what would later become the western United States. Play as Lewis, Clark, Gass or Ordway as you accumulate knowledge by discovering plants, animals and geography. Roll the dice and become an intrepid explorer in this cool worker placement game.

Ca$h 'n Guns: More Cash 'n More Guns is an expansion for Ca$h 'n Guns that adds...you guessed it! More cash and more guns. New secret identity cards change up the rules for each of the players, even giving a lucky few increased firepower in the from of either twin handguns, a revolver or a derringer pistol. Also, there is now special loot that is worth nothing, but adds to your bonuses, counterfeit money that may or may not be worth money and special treasures that can only be obtained by finding a key beforehand.

Epic is a fantasy card game brought to you by the minds behind the space themed deckbuilding game, Star Realms. Epic jumps straight into the action, letting you summon fearsome monsters and cast powerful spells from the very first turn. There are many ways to play; randomly deal out 30 cards to each player, draft with a group, or create your deck beforehand.

Navigate though the forest and get to Grandma's house before the wolf does in Little Red Riding Hood. If you've enjoyed games like Baba Yaga, Three Little Pigs, or Hare & Tortoise, you'll be familiar with how well IELLO brings fairy tales to life. If you're looking for a new challenge, you can play as the wolf as well!

Unicorn Glitterluck is a roll and play game for players aged three and up. Roll the die, hop between clouds and collect cloud crystals. You might find a muffin and forget about the race as you enjoy a delicious treat or maybe find a present to give to another player. This game is light-hearted, fun, and certainly a good introduction to gaming for young ones.

Princess Magic Fairy is a cooperative game where players work together to correctly identify spells cast on each other before the kobold steals them all. Each turn a player will take a card and draw the shape with their finger or a wand on another player's back. If they can guess the shape, you've successfully cast the spell. Otherwise, the kobold will steal it! Collect more spells than the kobold to win!

Posted by Labyrinth Games at 2:19 PM No comments:

by Alexander "More Teeth Than a Chainsaw Convention" Smith

Tides of Time is a two player drafting game where the cards you add to your kingdom will give you different opportunities to score points. After the first round, you'll be able to select a card from your previous kingdom as a "relic from the past" which will change the way you plan for the following rounds. You're sure to enjoy this game time and time again!

Takenoko: Chibis is a panda-packed expansion for Takenoko where you'll meet Mrs. Panda and all of her kids. New tiles will offer new gameplay experiences as you find the gardener's cabin or the celestial lake. With more pandas, you'll have to work twice as hard to keep the royal garden in order! 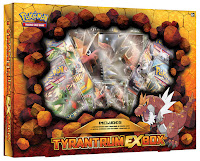 Tyrantrum EX Box can't even contain the fearsome power of this great dragon pokémon. Tryrantrum EX's Dragon Impact move does a whopping 190 points of damage, and his Despotic Fang ability makes sure that his attacks will always hit for full damage. Check out this new EX box and harness the power of this awesome dragon pokémon for yourself! 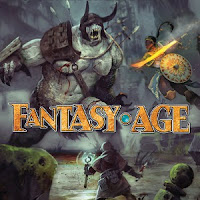 The Fantasy AGE Basic Rulebook contains everything you need to create your own worlds and run adventures for roleplaying games using the Adventure Game Engine. Titans Grave: Ashes of Valkana is an adventure series that takes place in realm of science fantasy where you're just as likely to find ancient catacombs as sentient AIs. Titans Grave was featured on the Geek & Sundry Youtube channel, and has captured the imaginations of players looking for something new and exciting. 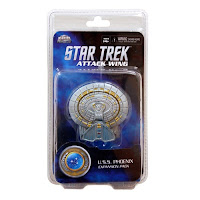 The U.S.S. Phoenix, Bioship Beta and Quark's Treasure for Star Trek Attack Wing have arrived! Add these new ships to your collection or play the included missions. Follow the story of Star Trek: Deep Space Nine by carrying out an unauthorized attack as Captain Benjamin Maxwell, helping Quark smuggle goods past the federation, or engaging in a high-stakes chase through an asteroid field as Species 8472. Wave 18 is filled with interesting new missions, crew, and upgrade, so be sure to check it out!
Posted by Labyrinth Games at 5:44 PM No comments:

by Alexander "Welcome to the Dungeon, We've Got Fun and Games~♪" Smith

Welcome to the Dungeon is a push-your-luck game where you play an adventurer trying to survive a dungeon full of monsters. You start out as a fully equipped adventurer, but as you add more monsters to the dungeon, you'll have to give up some of your equipment. Will you add to the dungeon and hope that it'll be too much for your opponents or are you confident that you'll be able to take on the terrors inside?

Tic Talk is a team party game where one team creates a set of five words by rolling a set of twelve-sided dice and using those letters in certain places in each of the words. Then, one person from the other team will look at the words and try to get their team to guess those words in a set amount of time.You'll be amazed at some of the crazy words people will think of in this game.

Duplik is a sketch game where artists and amateurs are equally matched. Each round, one player will have to describe a picture in as much detail as they can to each other player. After they're done, they will then reveal a set of of criteria that they'll be graded on. You may have said draw a tree with a tire swing, but did they draw their tree with four branches? Did they get the knot just above the tire? Is it in motion? Pay attention to the details and try to get the most points in this fun party game.

Legendary Encounters: A Predator Deckbuilding Game is the newest standalone expansion for the popular deckbuilding game series. Play cooperatively and take the role of humans fighting off the Predators; or try the player versus player variant, in which one player takes on the role of the Predators. If you own either the Aliens or Marvel versions of this game, you'll be happy to know that this is fully compatible with Aliens and can partially integrate with the Marvel games.

Android Netrunner: The Universe of Tomorrow is the final datapack in the Sansan cycle, and they've saved the best for last. Experience the wonders of the the Universe of Tomorrow expo where corporations are all showing off their visions for the future. With powerful cards like Team Sponsorship and Bookmark, both Corps and Runners will want to see everything this expo has to offer.