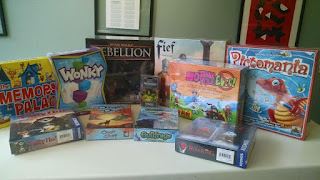 There is a highly anticipated new role-playing game for kids (and adults), No Thank You, Evil. We also have a cute new cooperative game, The Memory Palace, for little kids from Peaceable Kingdom.

We now have copies of Wonky for sale, so now you can finally get your hands on this wacky stacking game. Also, Dingo's Dreams, with art by Ryan Leukat, is finally here. I may have to open that one up. I love him sooo much. So MANY new things this week!

We also a new demo copy of Burgle Bros. and The Memory Palace, so come and play them with us if you've been interested in trying out those games!

Posted by Labyrinth Games at 10:17 AM No comments: 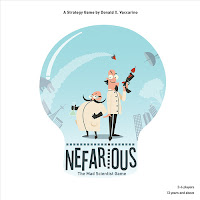 Nefarious is a fast-paced board game designed by the famous Donald X. Vaccarino, designer of Dominion. In Nefarious, you are an evil genius who is going to TAKE OVER THE WORLD! The only problem is that each of your opponents is looking to do so as well. Subvert their schemes with some of your own as you send your minions to obtain money, gather blueprints, and assemble inventions. Players will also have to deal with plot twists cards, which forces them to adjust their plans on the fly.

Crossing is a delightful bluffing game that can be learned in an instant and played in a matter of minutes...only those minutes will turn into hours as you keep coming back for more. The mechanics of the game are simple: each toadstool has a number of gems on it and players simultaneously pick which toadstool they want to take gems from. If two people pick the same toadstool, neither get any gems...and since there are fewer toadstools than players, and some have more gems than others, you may not always gather gems. After the first round, players can target their opponent's gems or stash your own leading to some very clever interactions. Kid friendly but surprisingly interesting even for adults, definitely one to check out.

Command the mythical monsters of ancient Egypt in Kemet! This area control game pits magically bolstered armies against one another in a race to accumulate points by winning battles, making sacrifices to the gods, and completing mighty pyramids. Action takes place during both day and night, with players choosing their strategies during the sunlit hours, and seeking divine intervention under the cover of darkness. The game components are amazingly detailed and really lend themselves to the fantastical nature of this strategy game.

Tokaido: Matsuri is an expansion for Tokaido that adds new gameplay elements in the form of traditional Japanese festivals. With new options to explore, your journey will be all the more rewarding as you celebrate the harvest with taiko drums or throw beans to ward off ogres. Tokaido: Matsuri is the elegant and unobtrusive expansion that players have been waiting for since Tokaido: Crossroads. 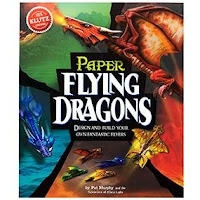 Blast other paper airplanes out of the sky with the fiery breath found only in the Paper Flying Dragons kit. Fold and fly your 12 colorful dragons with the help of simple and clear building instructions. Also included in the set are parts to make hatchlings and a robo-dragon! 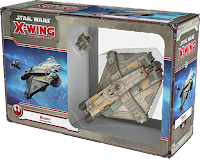 Fantasy Flight has recently released another wave of ships for the Star Wars X-Wing miniatures game. Joining the Imperial faction is the new Inquisitor's TIE, while the Rebellion gets the new large-based Ghost. the Scum and Villainy of the galaxy also get some cool new ships with the Punishing One and the Mist Hunter. The Scum and Villainy faction is really coming into its own, and with all the new options available, the Empire and Rebellion better watch out!


Back in stock:  Cosmic Encounter, Above and Below, Space Alert, Arkham Horror, Ashes: Rise of the Phoenixborn 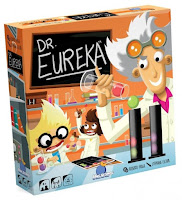 Dr. Eureka is a competitive science matching game where players will pour colored balls from graduated cylinder to graduated cylinder in an effort to match the placement of the colored balls as shown on a card. The first to perfectly replicate the picture on the card wins, but you can't go too quickly when pouring the balls from one container to another because you might pour more balls than you planned or worse...you might drop them! It'll take a sharp mind and a steady hand to win, but hey, that's science!

Bears! is a quick dice game where you and your fellow campers have been beset by bears and you'll need to quickly decide if you'll try to scare the bears away, make a run for it, or maybe even sleep through the attack. Each die will be paired off against a die of the opposite color, sleepers go in tents and bears will be frightened off by shotguns. If you're a fan of games like Zombie Dice or Chupacabra, you should certainly give this game a try. 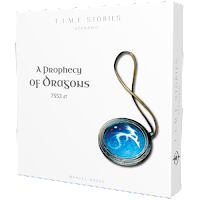 T.I.M.E. Stories: Prophecy of Dragons is an expansion where players will solve mysteries in a fantasy medieval setting. If you've played the original T.I.M.E. Stories or the expansion, The Marcy Case, you'll be happy to know there are new puzzles to solve and more timelines to untwist with this new additional adventure. 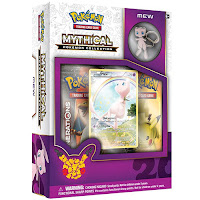 Business First, the second datapack for Android: Netrunner, has arrived! With a new identity for the Jinteki faction, new tools for runners like NetChip and EMP Device, and a new event card designed by the 2013 World Champion, this datapack is filled with cool new cards to improve your deck with.

Back in stock:  Who Would Win?, Mewtwo EX, Machamp EX and Gyrados EX Tins

Labyrinth is thrilled to be a co-sponsor and main contributor to the second annual WashingCon tabletop convention.

Tickets are on sale RIGHT NOW for our bigger, better convention. They're going fast: Our Early Bird tickets sold out in less than 24 hours. Registration is currently available for the next tier of tickets for the reduced price of $40. However, you'll still want to start planning right now.

Have a quick look at last year's event below:

This year's con has been expanded to two days, and the location has moved to the Georgetown University Hotel and Conference Center, boasting ten times the space of last year's convention. This location is convenient to lots of food options and a free shuttle to Metro. Guests have the option to stay at the hotel, which has food and games space available in public areas at all hours for attendees who want to play games deep into the night. 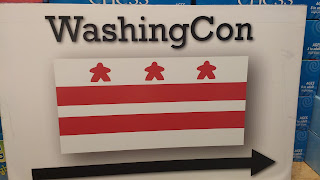 Along with the larger game space and new location, we are going to have some great vendors and sponsors in attendance. Looney Labs, NorthStar Games, and Dragons Demize are confirmed sponsors, with lots more to come!

Visit WashingCon's website for more information on sponsorship and ways to be involved in this year's event!
﻿


Posted by Labyrinth Games at 8:59 PM No comments:

by Alexander "Enigma Wrapped in a Sudoku" Smith 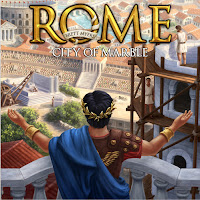 Rome wasn't built in a day, but you and your friends, Romans, and countrymen can build it in about an hour when you play Rome: City of Marble. Players take turns placing diamond tiles outward from the center in an effort to bring civic works to the city of Rome. The people might grumble that you've never given them anything, but you can prove them all wrong after building a fabulous aqueduct!


Labyrinth is excited to bring back two classic games that are often requested: Waterworks and Upwords.

Protecting your pipes and attacking others' is the name of the game in Waterworks. This reprint of a classic retro card game will have you building and fixing a network of pipes while your opponents will try to poke holes in your best laid lead pipe plans. 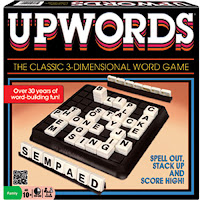 Upwords is a 3-D wordgame where you'll manipulate the words on the board by placing tiles on top of existing words, changing a few letters and creating exciting new words. Upwords expounds on the popular crossword game genre and does a good job of it. This game is a true classic, and if you don't already have a copy to call your own, the new printing is quite the handsome addition to any collection. 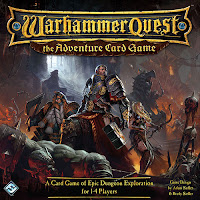 Warhammer Quest: The Adventure Card Game is finally back after selling out almost immediately when it was first released. It's a great way to experience the epic high fantasy world of Warhammer with your friends. An episodic campaign will have you battling fearsome foes and finding mythical treasures. This complex, co-operative game will have players taking on the roles of heroes with their own strengths and weaknesses, and finding out how the adventuring party can handle the threats that beset them. 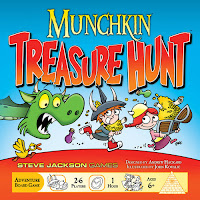 Munchkin Treasure Hunt brings all the monster-fighting, treasure-grabbing fun of Munchkin to young adventurers. With funny cards like a Fluffy Pillow weapon or Protective Kittens, you'll be battling ogres, witches, ghosts and more! 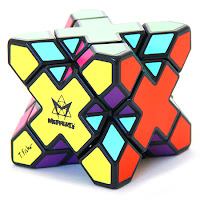 Skewb Xtreme takes twisting puzzles to a whole new level. Not only does each X have to be solved, but the inner diamonds must also match on their facets. 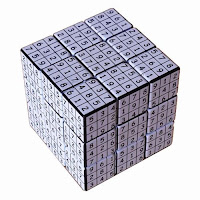 And here's a new one for the folks that love really, really hard puzzles. The Sudoku V-Cube is a puzzle wrapped in...well, another puzzle. Solving the 3x3 cube will take some serious sudoku skills, so even seasoned puzzle solvers might have some difficulty with this one. 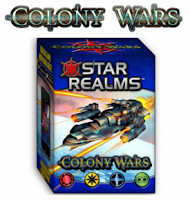 Star Realms Colony Wars is a stand alone expansion for the popular space deck-building game, Star Realms. With all new cards, this set is exciting for experienced players, but can also be picked up by new players. By combining Colony Wars with the base set or another copy of Colony Wars, you'll be able to play more than just two players. The Cosmic Gambit booster also adds new gambit cards that will give players special powers. 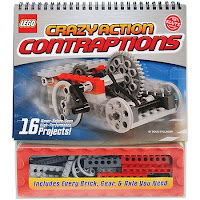 Lego Crazy Action Contraptions and Lego Chain Reactions are two Lego activity sets where you'll be given all the tools to make amazing devices with your favorite modular building bricks. These gears, axles, and bricks will work with any other Lego product, so what you can build is only limited by your imagination. 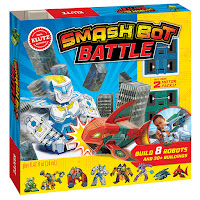 Build eight different papercraft robots and have them fight in Smash Bot Battle. After folding and assembling your robot warrior, you can attach it to a motorized base and have the bots go at each other...or the city! 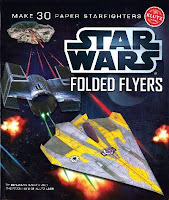 Make thirty different iconic spaceships with Star Wars Folded Flyers. TIE Fighters, A-Wings...even the Millennium Falcon are included. See if you have the folding skills to make a paper spaceship that can make the Kessel Run in less than 12 parsecs!

Smash Up: It's Your Fault is the result of four fan-voted favorites being given their time in the sun with a brand new expansion. Now you can pair Sharks, Dragons, Super Heroes or characters from Greek Mythology with the classic Smash Up factions...or even with themselves. How awesome are Robot Sharks? Maybe only as cool as Dragon Ninjas! Try out these new decks and see what your new favorites are! 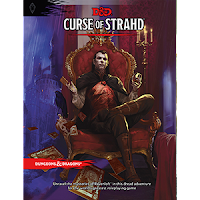 Dungeons & Dragons: Curse of Strahd is a revamped adventure that takes a team of adventurers to Count Strahd von Zarovich's Castle Ravenloft. For extra enjoyment, players can even acquire a real life Tarokka Deck (coming soon) that will let fate determine key aspects of your adventure. This classic story has been polished and remastered for the 5th edition rules, so if you haven't experienced the Gothic horror of Castle Ravenloft, give this module a try.

Back in stock: Marrying Mr. Darcy