Hey gang! Between the holiday rush and the New Year, we haven't had the time to get a blog post out in a while. In apology, we have this special extra-long edition, with every new release or notable restock in the last month! 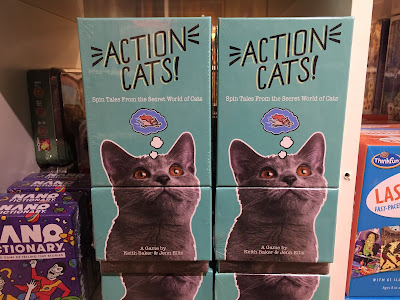 For the cat-lovers among us comes this adorable party game. Each player takes turns being judge, while the rest of the group constructs a story for the round out of cards from their hand. Adorable and tons of fun! 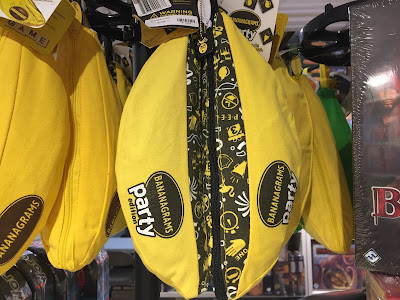 Everyone's favorite yellow spelling game is back, and ready to party! New in this potassium-rich pack are the Party Power Tiles, allowing you to sow spelling chaos with powers like the Re-Gifter, Thief, and Pouch Head! A blast for all ages. 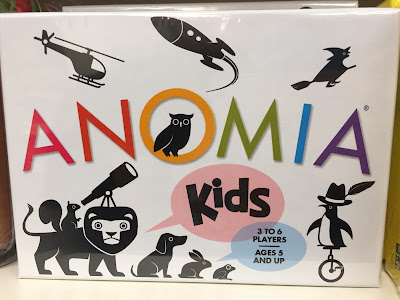 Anomia is a game practically built for family gatherings, and Anomia Kids makes that doubly true. An excellent way to get young ones involved and entertained, while still educating them. 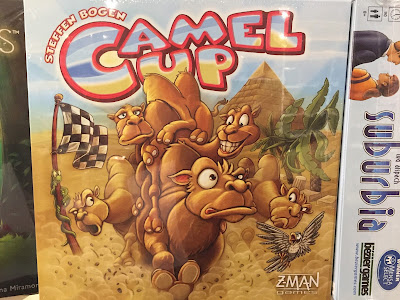 The Spiel de Jahres winner Camel Up has returned to Labyrinth after a long leave of absence! In this game of strategy and chance, players place bets in a running contest of racing camels. 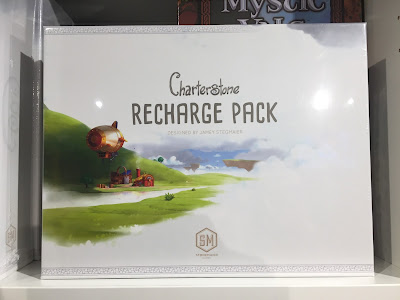 Charterstone remains one of the most unique games we carry: A persistent legacy worker-placement game where the players construct a city, sticker by sticker. With the Recharge Pack, you can relive the whole experience all over again--the backside of the original board forms a brand new village! 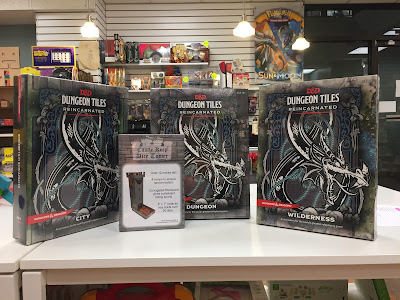 Exciting news for our RPG players--the new Dungeon Tiles are in! These interlocking terrain tiles are sure to spice up any campaign, with variations for city, dungeon, and wilderness environments. To top it off, we have our first honest-to-god Dice Tower! Roll in style. 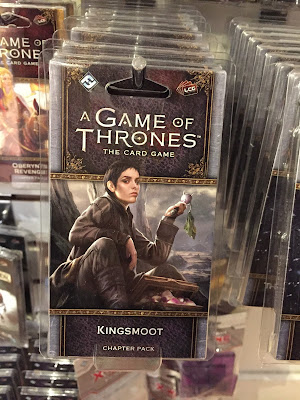 The newest set of the GOT LCG from Fantasy Flight Games sees the Ironborn of House Greyjoy return to the old ways. Hold the Kingsmoot, and serve the Drowned God in victory. 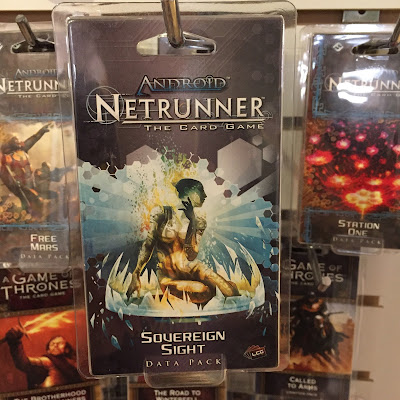 Sovereign Sight, the newest data pack for the Netrunner LCG, takes us to the shores of Lake Victoria, where the nations of the Sub-Saharan League have set aside their differences and pooled their resources to construct a second orbital elevator. The peace is tenuous, but the potential is limitless. Sieze your cut. 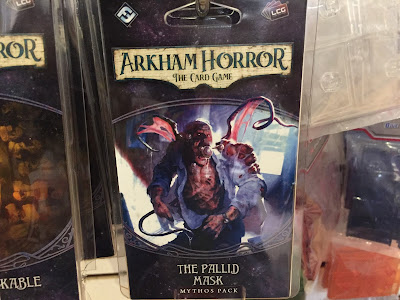 Your pursuit of the mystery behind The King in Yellow leads your investigators into the deep catacombs below Paris, where the dark hides ancient secrets. The Pallid Mask introduces new scenario-specific rules, as the locations you lay out form a dense labyrinth of danger. Tread carefully, and bring an extra torch... 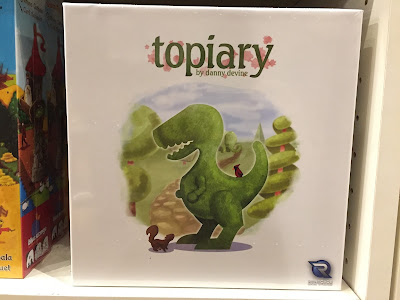 Topiary is a great game of tree placement and abstract strategy. Players construct a topiary garden, tile by tile, while claiming viewing angles with meeples. Viewers can see all topiaries in a straight line, as long as each tree is larger than the one before it. Fight for position and grow to victory.

The Palace of Mad King Ludwig 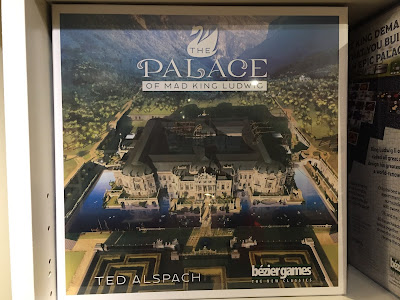 You've built Castles for Mad King Ludwig--now build him his Palace. All players compete as architects designing the palace together, purchasing and laying room tiles as the moat slowly forms around the growing palace. When the moat is complete, the game ends, and the most influential architect wins. Similar in spirit, but radically different in gameplay, the Palace of Mad King Ludwig is a fascinating new construction game. 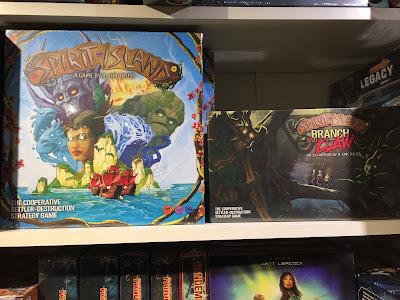 Spirit Island is back! 2017's hottest cooperative game returns to shelves, with a brand new expansioin: Branch and Claw! Leverage these new spirits of forest and ferocity to help drive the invaders from your island home. 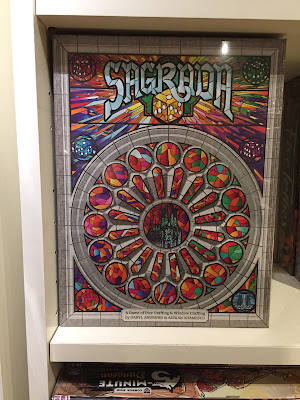 Also back on shelves is the incredible Sagrada. On of Kathleen's favorites of last year, this gorgeous dice-drafting game has you competing to build the greatest stained glass windows with dozens of beautiful, translucent dice.

Tales from the Loop 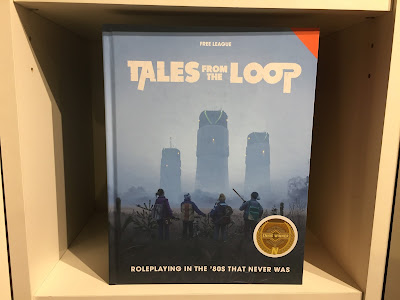 Tales from the Loop is a beautiful new narrative RPG set in a fantastic alternate 80s. The players take on the roll of Kids, at the cusp of adulthood, exploring this mysterious landscape at once familiar and alien, studded with strange machines, distant and out-of-touch adults, and Mysteries that need solving. 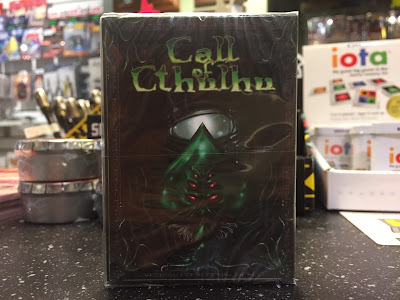 Feel like your card games are missing a certian eldrich horror? Try picking up these Call of Cthulu playing cards! 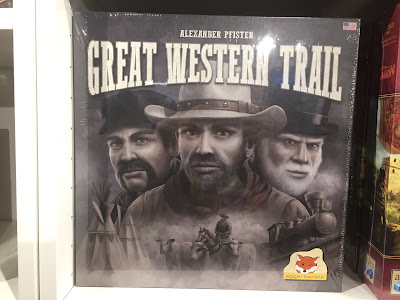 Another returning favorite, Great Western Trail has you take on the role of a cattle drover competing for market dominance. Manage your herds, hire cowboys to help out, and make careful use of the buildings along the way to sell the most beef.

Shipwrights and Explorers of the North Sea 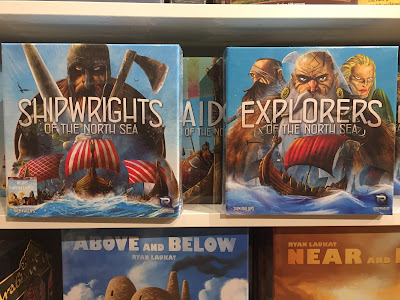 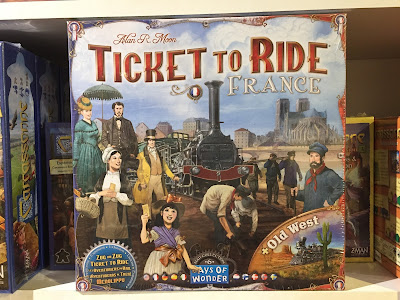 The newest double-sided Ticket to Ride expansion board takes us to both the wealthy cities and lush countrysides of France, and the arid badlands of the Old West. A great get for any fan of Ticket to Ride. 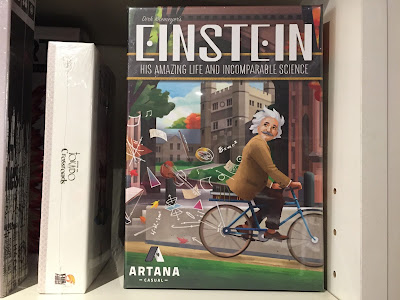 In Einstein, the players take control of Einstein during one of four phases of his life, from his youth as a rising star of physics to his old age as an advocate for world peace. Drawing from the ideas of that stage of life, the players will, together, assemble the grand theories of Einstein.

Magic the Gathering: Rivals of Ixalan 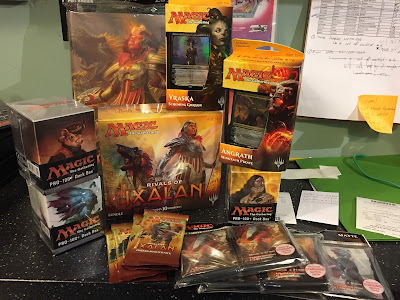 In case you've been living under a rock, Rivals of Ixalan has launched! The search for Orazca has ended, and now the race to control the Golden City and seize the Immortal Sun has begun! Take part in the battle with some boosters or boxes, or choose a side with our premade planeswaker decks, each with a unique planeswalker inside. And don't forget to protect your cards with some Rivals of Ixalan sleeves, deckboxes, and binders! 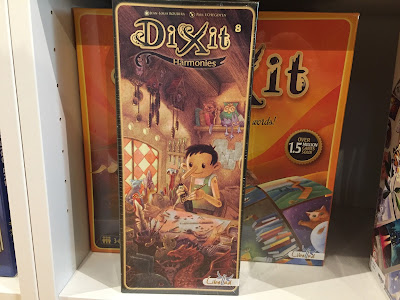 For lovers of the original Dixit comes a brand new expansion. Stuffed with the explosive and powerful art of Paul Echegoyen, this expansion comes with 84 new picture cards to make the game feel like new.

What Do You Meme? 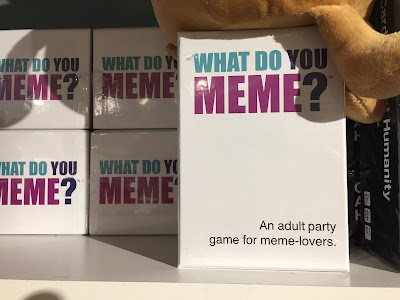 Do you like Apples to Apples or Cards Against Humanity? Do you like memes? Then you'll love What Do You Meme. A picture-captioning game, it follows in the tracks of its forbears with a distinctly internet-age twist.

The Bloody Inn: The Carnies Expansion 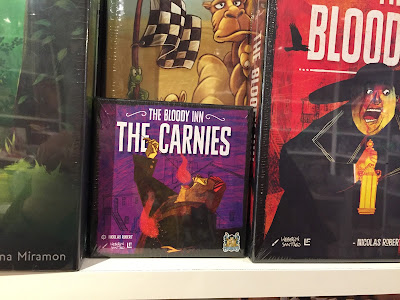 The Bloody Inn: The Carnies is a new expansion for The Bloody Inn that adds three self-contained expansion packs that can be added to the base game in any combination you please. The Carnies themselves bring the circus to your inn, Notables replace Nobles, and old Aunt Ginette will give you some Tips and Tricks--for a hefty sum! 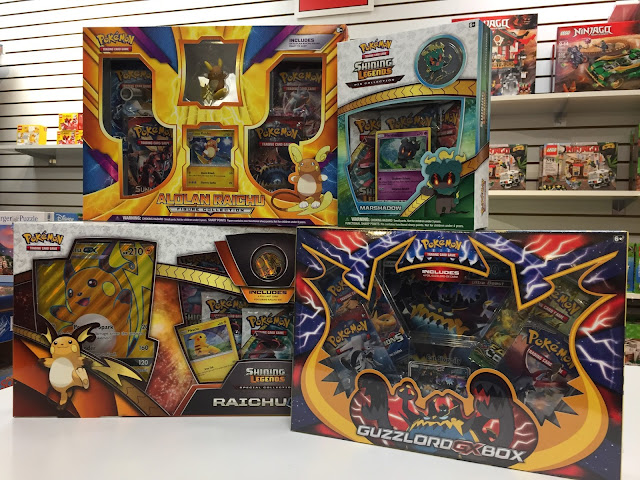 Pokemon's had a ton of new releases in the last month! Ultrabeasts like Guzzlord GX, two different Raichu boxes, a Marshadow Pin Collection, and of course the brand-new, just-released UltraPrism set! There's no better time than now to dive into the world of Pokemon! 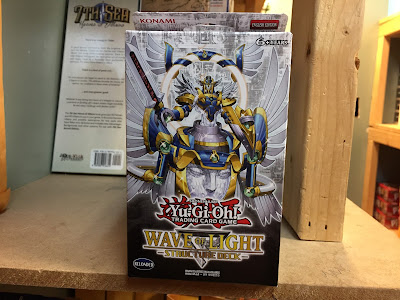 On the subject of TCGs, our Yu-Gi-Oh players will excited to hear about the release of the brand-spankin'-new Wave of Light structure deck. Blast your opponents with searing rays and claim victory! 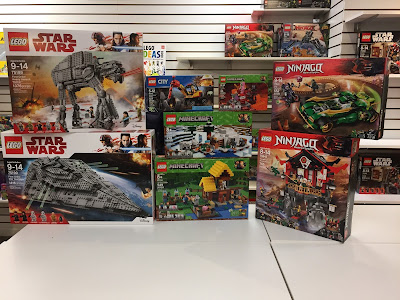 And last, but certianly not least, a whole new pack of Lego sets! From the small-but-sweet box of the Mining Power Splitter to the titanic First Order Star Destroyer (with lots of Minecraft in between), there's something for everyone in this new set!

That's all for now. Keep an eye on this space--weekly blogs are returning! We get new stuff all the time, so watch out!

Posted by Labyrinth Games at 5:14 PM