Legion is finally here! Alongside this gigantic new release, we've got a ton of other new goodies! Take a look: 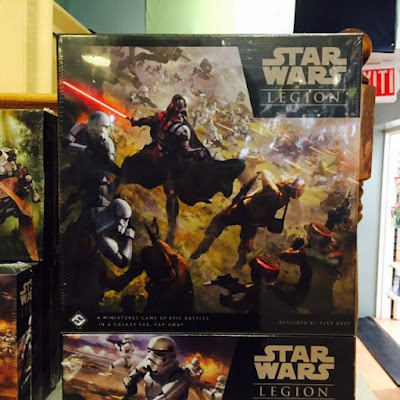 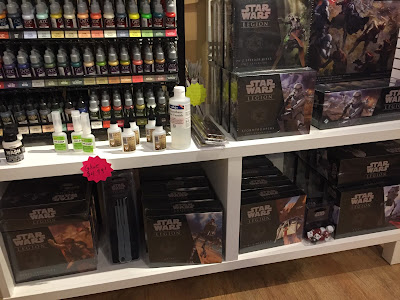 The biggest release of the year so far, Star Wars: Legion is the hotly anticipated new game of tactical miniature warfare! Take control of the rag-tag Rebels, or the ruthlessly efficient war machine that is the Empire. We've got core sets, AT-STs, T-47 Airspeeders, dice and more! Our Legion release party is this Sunday, March 25th, from 11:30 am to 5:30 pm. Come play! 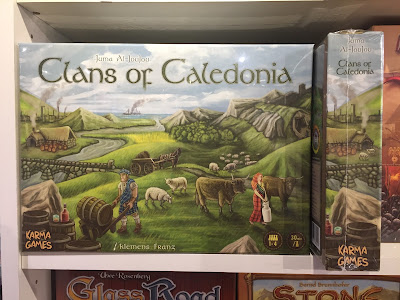 Clans of Caledonia puts players in the driver's seat of one of Scotland's many clans at the dawn of the Industrial Age. Lead your people and improve your production capacities for linen, food, cheese, and most importantly, whisky, to best take advantage of the vast potential of the age. We've had tons of requests for this amazing game, and we're super excited to finally get it in! 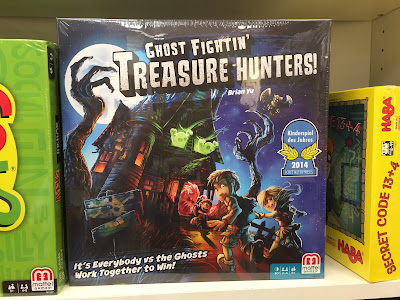 Ghost Fightin' Treasure Hunters is a rip-roaring cooperative game of (guess what) fightin' ghosts and huntin' treasure! Players must work together to collect gems and exorcise the ghosts quickly, because if they allow too many ghosts to gather, a game-ending haunt will trigger. Fun for the whole family!

A Wrinkle in Time 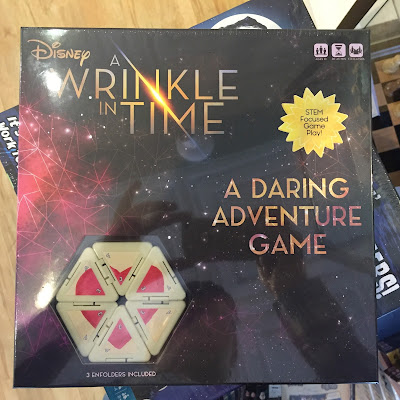 A Wrinkle in Time is a cooperative game of dice rolling, math, and time travel based on the movie and classic book of the same name. Using hexagonal "enfolders" (pictured above) in conjunction with dice players work their way through time and space to solve mathematical puzzles in an attempt to rescue Mr. Murray and return home safe.

The Maze of Games 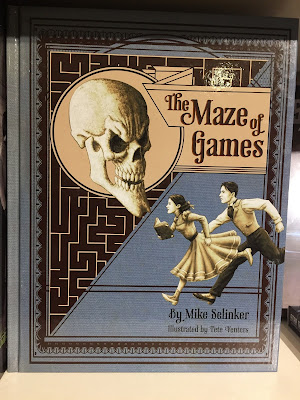 Like spooky skeletons and perplexing puzzles? The Maze of Games is the newest addition to our puzzle book collection, and it's bringing something new to the table. Maze of Games is a choose-your-own adventure puzzle book! Take control of Colleen and Samuel Quaice, two plucky Victorian youths trapped in a perilous labyrinth of puzzles and games by the mysterious, skeletal Gamesmaster. Will you lead them to freedom...or their doom? 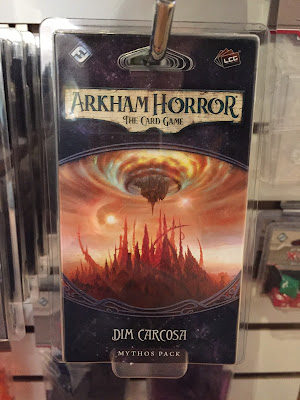 The angles are wrong. The air tastes of metal. Two swollen, red suns hang low and sullen in the alien skies. Welcome, at last, to Dim Carcosa, the domain of Hastur, the King in Yellow. You've pursued his trail for months now--first across the sea, and now across time and space. But have your actions truly been of your own accord? Or have you simply been a puppet of Hastur from the start? Find the answers in Dim Carcosa, the sixth and final Mythos Pack in Arkham Horror's Path to Carcosa. 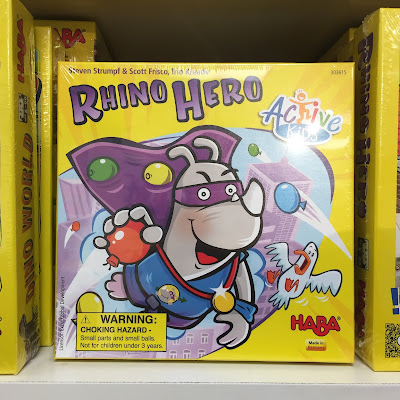 From the universe of Rhino Hero comes Rhino Hero: Active Kids! The nasty spider monkeys have been harassing city residents with slime balls. Compete with your hero friends to see who can stop the most! Collect slime on your cape as you circle the city, but beware your competitors! 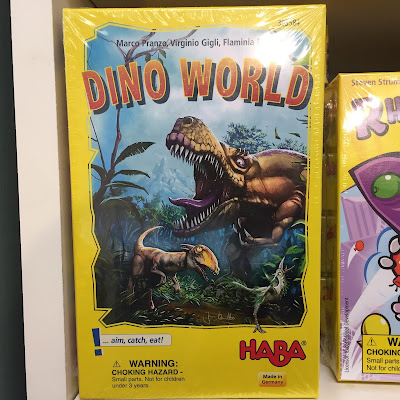 Life in prehistoria can be pretty rough! In Dino World players get to experience the Jurassic food chain for themselves. Each card represents a type of dinosaur in a hierarchy of prey and predators. Play consists of tossing cards onto the field of play; if you land on top of a card you can eat, you score its points, but beware other players stealing your lunch! 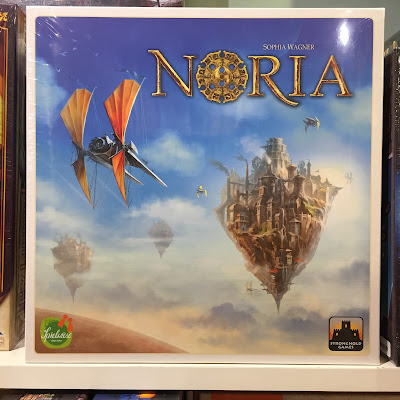 Noria is one of the most exciting new games we've seen in a long time. Set in a steampunk world of floating islands and flying ships, Noria is a game of trade, growth, and a brand-new gameplay mechanic called, "wheel building." Players select actions by manipulating a custom, three-tiered wheel; throughout the game they may purchase new discs to slot into their wheels or customize the existing slots further. 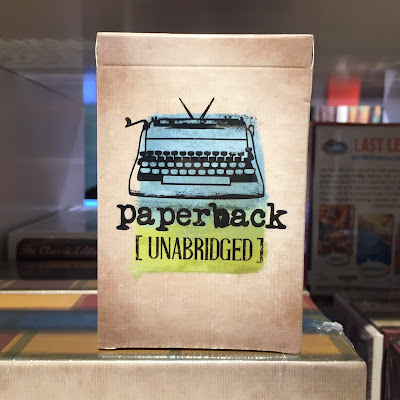 For lovers of the popular spelling deckbuilding game Paperback, comes the latest expansion, Paperback Unabriged! Unabriged adds a whole slew of new cards, including asterisks, typos, and even the powerful, but double-edged, 3-letter cards. If you want to take your "novel" to the next level, pick up Unabridged.

No Thank You, Evil! 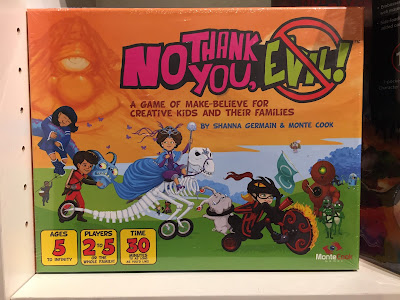 No Thank You, Evil! is back in stock! This is a charming roleplaying system aimed at families to enjoy together. Kids construct exciting characters keyed to a few dynamic keywords like: Cool, Super Smart, Princess, or Loves Ooey Gooey Things. The Guide--usually a parent or older sibling--presents a scenario for the heroes to solve, and helps them get through the adventure. An excellent way to introduce roleplaying to younger kids, while getting the whole family involved.

Edge of the Empire: Lords of Nal Hutta 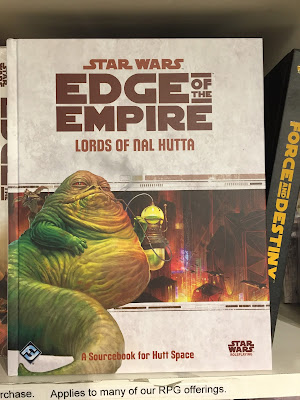 Lords of Nal Hutta is an Edge of the Empire sourcebook that provides an exhaustive and flavorful guide on how to play in Hutt space. The corpulent, alien crime-lords of Nal Hutta claim a shadow lordship over vast swathes of the outer galaxy, where the only law is that of a quick trigger. An excellent addition to any gamer's collection. 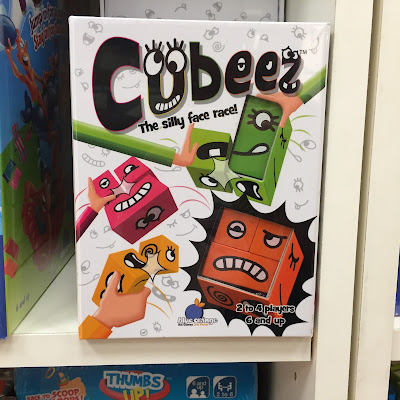 Cubeez is a puzzle racing game in the vein of, Go Go Gelato! or Dr. Eureka. Players each have 3 "Cubeez" blocks with different fragmentary expressions on each face. Each round, a card in the center is revealed with a goal expression, and the players must race to reconfigure their Cubeez into the right shape. A high-speed everyone can enjoy! 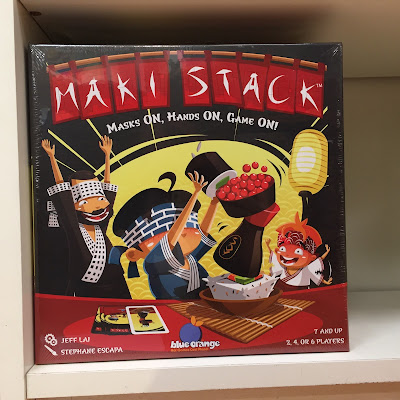 Maki Stack is a silly dexterity game for the whole family. Each player must take turns stacking pieces atop the steadily growing pile of sushi; obeying specific challenges--perhaps you must play blindfolded, or perhaps two players work together to pick up a piece "chopsticks" style. 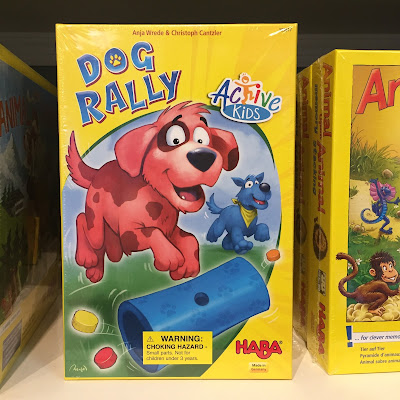 For young gamers, Dog Rally encourages play by keeping kids moving and active. Players push along a rolling toy that dispenses "treats," while catching them on all fours. The most successful "dog" wins!

And that's all we've got for this week. Check back next week for more new arrivals!

Posted by Labyrinth Games at 7:41 PM