Happy Friday, all! We took an Easter break last week, which means we're back with a double-feature! Tons of exciting new stuff! 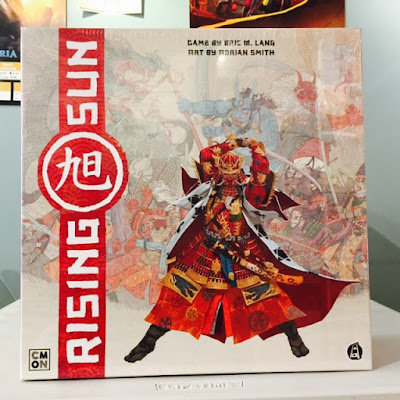 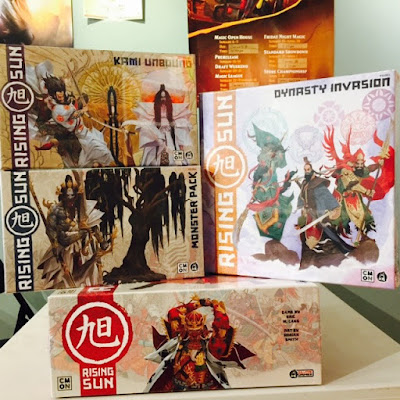 Rising Sun is perhaps the most gorgeous game to release this year. A beautiful and intricate game of strategy, Rising Sun considers itself a spiritual successor to Diplomacy. Set in a Feudal Japan where the divine Kami have returned to guide mankind once more, players will make alliances, betray them, negotiate, battle, and even commit honorable suicide should the situation demand it. Faith, honor, power and commerce all must be balanced in this superb game from the makers of Blood Rage. By the way, the models are stupendous. 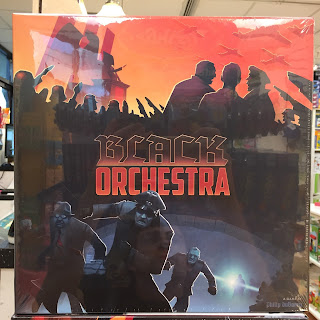 Black Orchestra is back! In this cooperative game players assume the role of historical members of the Third Reich, who later in the war came together to plot the death of Adolf Hitler. Players must work together to build their plot, aquiring contraband and constructing networks, all the while having to manage the suspicion of the Gestapo. Arrest means interrogation, and should you fail to resist, you might be forced to rat out the whole team! A high-tension game of subterfuge and assasination. 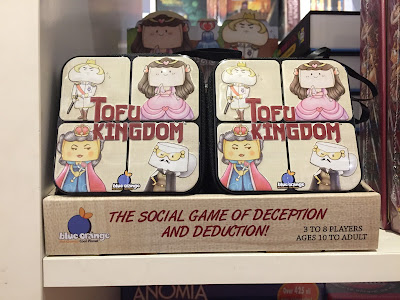 Tofu Kingdom is a lighthearted game of social deception set in a whimsical world of dessert people. Each player is secretly assigned a role. The player who draws Prince Mochi must figure out who is secretly his beloved Princess Tofu, but the other players have agendas of their own! Adorable and tons of fun. 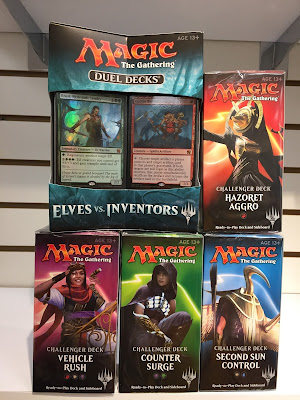 Releasing today are a whole slew of new premade Magic decks! The new Duel Decks theme: Elves vs. Inventors has you defend the wilderness with the wild elves, or advance the cause of civilization with the artifact-using inventors. Additionaly, there's something new in MTG today: Four premade decks of a new kind, Challenger decks. Each Challenger deck consists of a Standard-legal 60 card deck and a 15-card sideboard, each filling a viable archetype in the meta. These decks are intended to be viable to buy and play at Friday Night Magic, serving as a gateway into Magic as a whole for newer players. Come take a look! 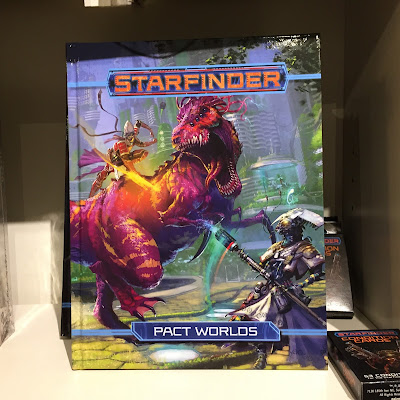 The Pact Worlds of the Golarian System are the core of known space for the adventurers of Starfinder. In the Pact Worlds supplement, Paizo brings them to life, with detailed descriptions of locations, corporations, governments and more, adding depth to your games. A great pull for any Starfinder fan. 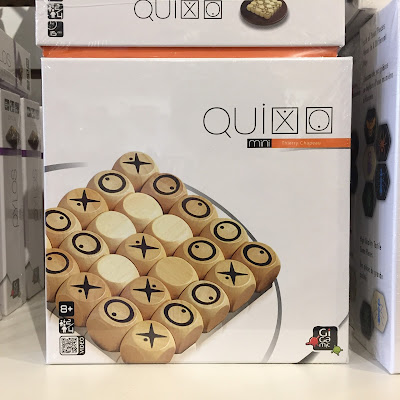 Quixo may, superficially, resemble a game of tic-tac-toe, with two players competing as X's and O's to try and make a line--but the resemblence goes no further. Rotating and pushing rows of cubes, Quixo is an elegant game of strategy worthy of respect. 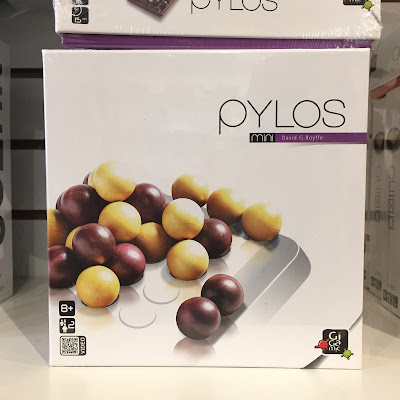 Pylos is a deceptively simple game of strategy. Players take turns playing spherical pieces on a 16-slot board, each vying to be the one to place the final piece in the pyramid. But from this simple setup emerges a complex game of wits. An attractive addition to any collection. 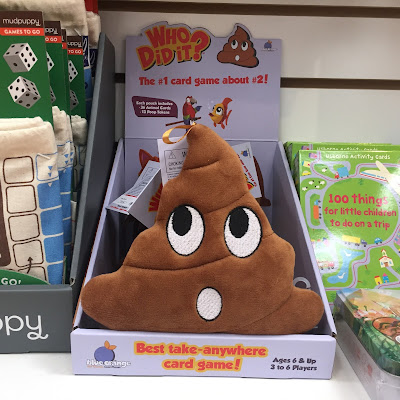 Who Did It? is a hilarious game of cards and crud. Players race to successfully discard their pet cards and lay the blame on somone else for the mess in the living room. Be quick, or you and Fido might find yourselves kicked out! 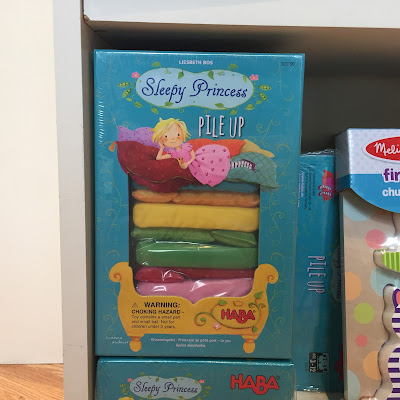 Sleepy Princess Pile-Up is a dexterity game for very young gamers. Players take turns helping the princess stack many different mattresses and comfortors upon her bed to mask the uncomfortable pea. A cute game for families. 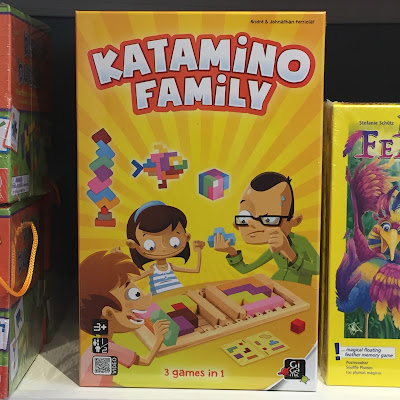 Katamino Family is a versatile puzzle game with three different modes! Players can race to fill up their grids first, fill up a grid simuentaneously, or even play solo. Tons of fun and very replayable. 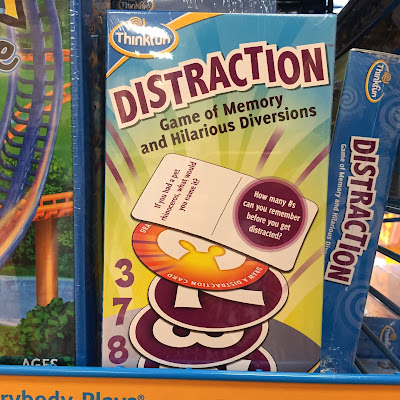 Distraction is a brain-training game of memory and focus. Players take turns laying down number cards, then reciting the sequence in the stack. Occasionally a Distraction card will pop up and force you to answer a trivia question before you can recite the numbers! How long can you last? 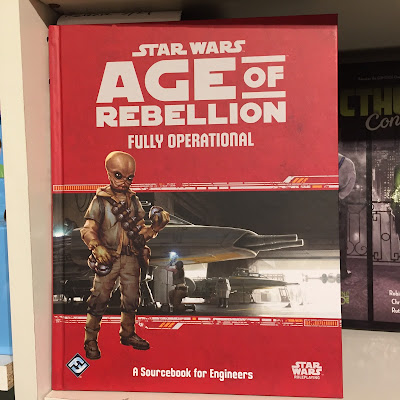 Fully Operational is a sourcebook for the Engineer class in the Star Wars: Age of Rebellion RPG. If you want to play a hero who lives through their wits and skill, Fully Operational will give you a toolbox to take apart the Empire.

Legend of the Five Rings: Disciples of the Void 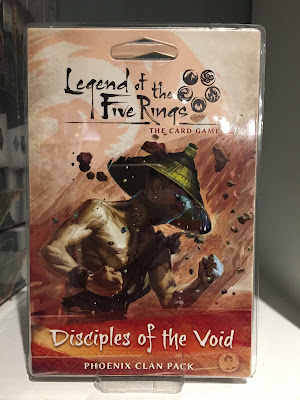 The first of the L5R Clan Packs has arrived! Containing 78 cards--3 copies of 25 cards, along with three single cards--this pack focuses on the mighty, mystical Phoenix Clan. Packed to the gills with powerful Shugenja, mighty spells, and more, this is an excellent additon to any Phoenix clan deck. 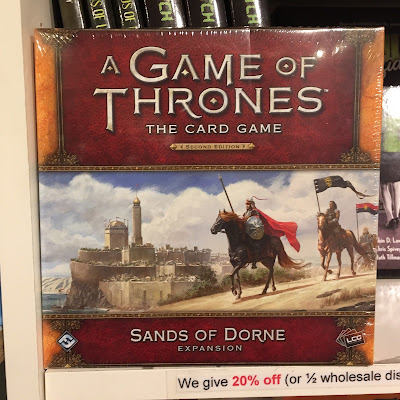 The kingdom of Dorne may have been defeated, but never have they been vanquished. Now, in the Sands of Dorne expansion, their time of vengeance is at hand. Strike with the fury and malice of a wounded viper, and make the Northern powers regret ever having crossed you. 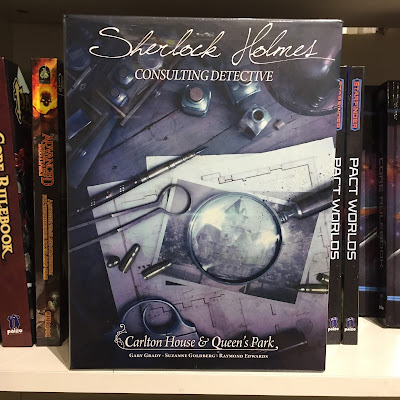 Step back into the shoes of history's greatest detective in the new module for Sherlock Holmes, Consulting Detective: Carlton House & Queens Park. 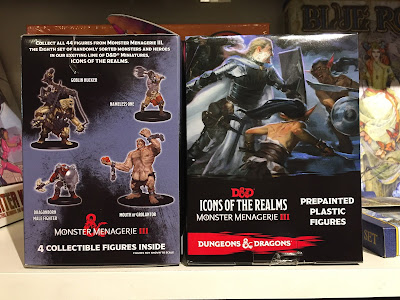 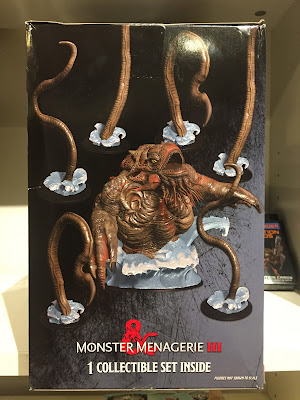 For every hero, you need a villain. And for big heros, you need BIG villains. You need monsters. In Icon of the Realms: Monster Menace III, that's what you get: oodles and oodles of monsters. Deranged giants, seige goblins, and even the mighty, mythical Kraken are on offer. Within each box is a random mini--except for the aforementioned Kracken, which is too big so it gets its own box. 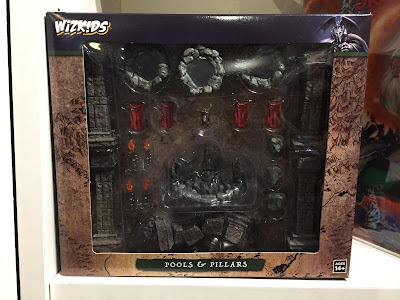 If you want to add a little flavor to your dungeon delving, you could do much worse than these pools and pillars. From a crumbled ruin to a soaring hall, these miniature scenery pieces will get you into the moment!


Attack of the Jelly Monster 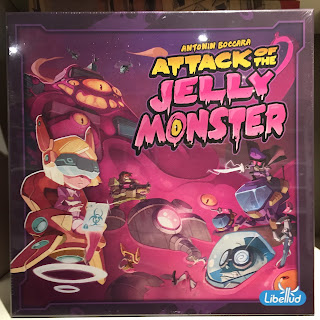 Attack of the Jelly Monster is a chaotic game of real-time dice rolling. In a future where giant alien jelly monsters falling from space are commonplace, corporations fight over the precious goo they can gather before the army blasts the monster back to space. Players must roll and assign their dice in real time, choosing when to commit their special dice and watching out for their ruthless competitors! 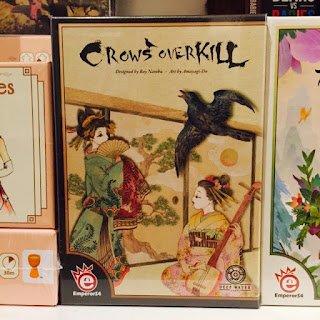 Crows Overkill is a game of balance and peril. Based on an old Japanese poem bemoaning the morning birdsong that signals the poet's parting with his lover, the game consists of the players competing to be the last to leave their bedrooms. Each turn, crows are drawn from one deck, and players use shamisen cards from another to frighten them away. The last player remaining wins! 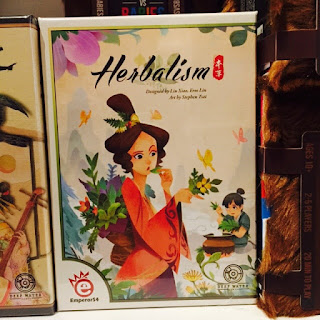 For those looking for a graceful game of investigation and harvesting, Herbalism might scratch your itch. The players are novice pharmacists, called in to investigate a dangerous plague and finding its cure. Discovering the cure is difficult, and cooperation will speed you on your way--but only one can claim the crown of God Farmer, so be careful what you share! 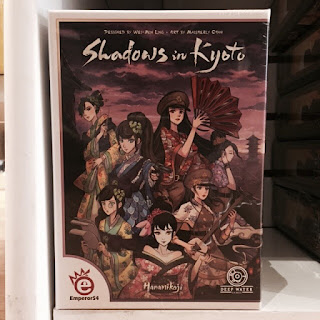 Shadows in Kyoto is a new entry on our 2-player shelf, a game of strategy and espionage set in Meji-era Japan. The newly risen Meji government must ferret out the spies who remain loyal to the deposed Shogun, who in turn must try and secure a position for a counterrevolution. Victory comes in many forms--whether it be successfully misleading your opponent with a torrent of false intelligence, capturing your opponent's true plans, or having your master plan escape the web of Kyoto and revolutionize Japan a second time. 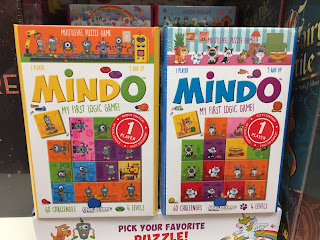 Mindo is an entry-level logic puzzle for beginner gamers! Can you arrange the dominoes to match the card? A great way to get kids puzzling. 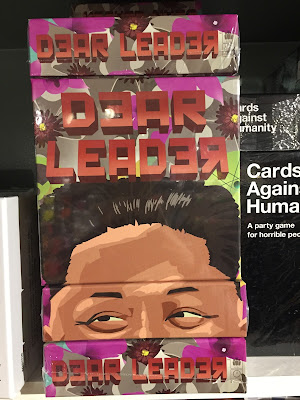 Dear Leader puts you in the large shoes of Kim Jong Un himself, in a banter-filled game of absurdity and obsequiousness. Each round, a player must take on the role of Kim Jong Un, who is presented with a problem. The other players, as advisors, offer solutions, which Dear Leader must one-up to prove his supremacy. A party game for grown-ups. 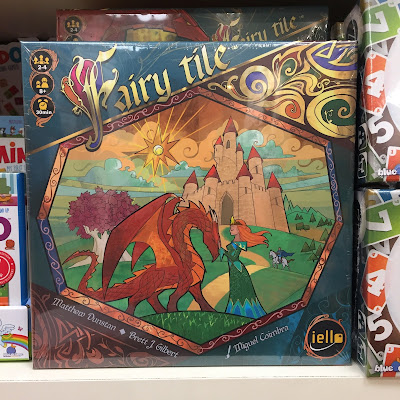 Fairy Tile puts the players in the roles of a wayward Princess, a marauding Dragon, and a pursuing Knight, each trying to reach the end of the story first. Players will take turns placing tiles to construct the kingdom, then try and accomplish objectives to advance the story. Beautiful and well-made, this is a great game for families. 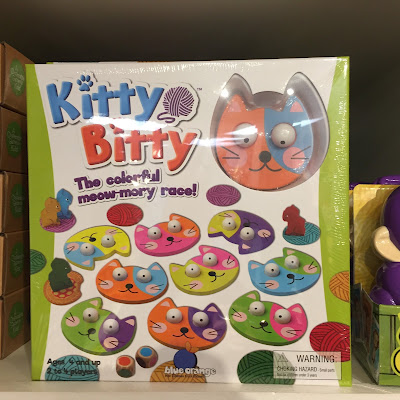 Kitty Bitty is a memory game for small gamers. Each player controls a kitten, trying to sneak out of bed--but watch out, if a mother cat spots you, you're stuck! 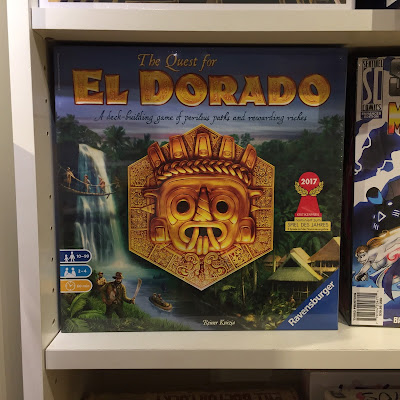 El Dorado is back! This game sends the players to the dense jungles of South America, seeking the fabled city of gold. Players each must outfit their expedition with supplies and employees, and compete for the prize. The first to reach the golden border wins, so don't fall behind! 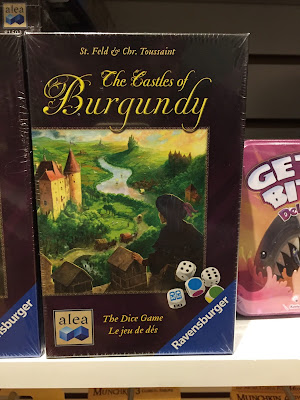 Castles of Burgundy is so beloved that it has now spawned two offshoot games: The card game, and now this dice game. Players roll dice, and then everyone bids for the results, using them to complete colored sections on their map. The grandest estate will crown the victor! A quicker-playing, more portable version of a timeles classic. 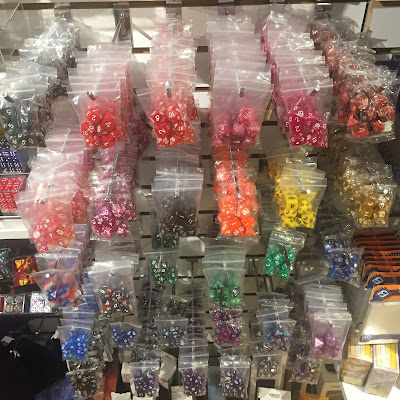 Last but not least, we've restocked our dice and recieved a bunch of cool new sets! Come take a look!

That's all for this week. Check in next week for more new arrivals!

Posted by Labyrinth Games at 4:59 PM