Guild of Heroes Report for 8/25

The Guilds adventures continue across the isle of Niln! Here are some of the adventures they undertook this month...

Word had come to the Guild that people were starting to evacuate the nearby town of Sparkwin’s Hill. A mysterious cloud of mist had been drifting towards town, and the residents were getting spooked! Six heroes set off from the Guild: Toki Blackburn, Nova, Sound of Fire, Charsmen Woodsmith, Azul Ragnarok, and Mystery. While Toki and Charsmen did recon at the market in Sparkwin’s Hill, the other adventurers investigated the mist by many means. They climbed trees, dipped their toes, and even volunteered one of their horses to see what lay within.

The six heroes regrouped to head inside, not forgetting a safety rope in case they encountered the worst. Inside was a strange scene, with dancing trees and shrubs entertaining an ancient dryad, Neivana of the North Wind. He explained that he had returned to find his friend, a tree named Roots-upon-Granite. The skyscraping tamarack tree was said to be found where the bustling market had been earlier that day.

The party’s research led them to the tomb of a wizard named Zadelrazz. Hundreds of years ago, he had chopped down the tree to use in spellcraft. The party smashed the stone golems that they found defending his tomb and presented the seeds that he had stored within. Almost against hope, they were sufficient to avert Neivana’s interest in the hilltop, and his wandering path turned elsewhere.

Morning - The Reliquary of Baird of Korin with Dungeon Master Matt

The noble adventurers of the Guild of Heroes set out to the town of Korin to resolve a dispute over an ancient reliquary, discovered in the town mine. They were immediately hindered by a series of traps and defenses set up as part of the civil war that had broken out within city limits, but bypassed a pit trap and portcullis to gain access to the war-torn Korin. Within, they met a few warring factions, explored the city, and determined that this reliquary could grant one wish to any who were “pure of heart”.

After a lengthy search for our heroes and a battle for the reliquary, aided many times by Draw’s thaumaturgy, the heroes were forced to defeat the town’s elder and took the reliquary back to the Guild for safe-keeping.

“Pay tribute, or be attacked by our tamed giant!” This was the word going round from the village of Thokville. No one knew where they got it. The Guild of Heroes had no chance but to look closer. Six heroes stepped up to the task: Portia Rang, Cora Thorngage, Zara, Orryn, Sauron, and Ancestra Warriorheart. Very quickly they encountered a large path smashed through the forest, broken trees and bare footprints. This led them to Ibzig, the only goblin to have survived a night-time attack on their now-ruined encampment. The party saved his life with healing magic, gaining a companion in the process. 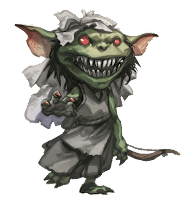 The footprints led onwards, growing in size as they approached the village of Thokville. The village sported new features: a huge building in its center and tall wooden walls, all made of snapped off tree trunks, some of them gargantuan in size. It didn’t take much to infiltrate, a sleep spell and a tasty bribe did the trick. Within the “temple” at the center of town was the apparent giant, a vastly oversized goblin! Her name was Bleurkh, and each time her “worshippers” bullied her into anger, she got bigger! Ibzig told her that she came from the same Goblin tribe, where she had been the target of incessant teasing and bullying. It wasn’t clear which would break first: the roof or her spirits.

Hoping to lay waste to the extortionist little town, the party joined in, repeating mean words that Ibzig told them. It didn’t take them long to realize how they were making Bleurkh feel, and they had a change of heart. They chose to stand up for her against bullying, including the efforts of a party of orc raiders that chose to attack at that coincidental moment! They scattered the attacking bandits with little difficulty, a cherry on top of their successful efforts to lift Bleurkh’s spirits. The heroes helped find the potion that would return her to a normal, diminutive size, and the day was saved. 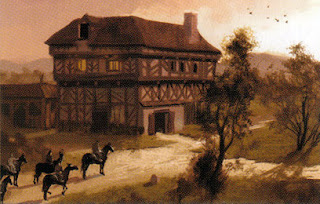 Our intrepid adventurers, Paelias, Akida, Thor, Silas, and Ancalagon, having heard of disappearances and rampaging monsters in the Sapwood Forest, promptly set forth to save the day. They followed a path of destruction to the Feymead Brewery, where they met a wood elf named Aselivan. He was a brewer who made and sold moonlight-infused birch beer to the faeries of the forest. It quickly became clear, however, that he was up to no good, and Akida snuck back onto the brewery grounds that night to disable the moon gem that Aselivan was using to fuel the process.

As the sun set and the moon rose, fae across the forest who had consumed the moon-drinks began to transform into otherworldly beasts and descend upon the brewery. Paelias and the others set upon some of the creatures to hold them off as Akida held off the now-monstrous Aselivan on his own - until, at last, the full party reached the estate and was able to destroy the moon-gem, freeing the forest from its curse.

As the Guild faces new challenges at home on Niln, how will they manage the War of the Giants and the other arcane threats that plague the world? There's only one way to find out! Sign up now for next month's Guild of Heroes adventures now (or hop on the waitlist, once we fill up) for Saturday Morning, September 15th or Saturday Afternoon, September 15th. We hope to see you there!
Posted by Labyrinth Games at 4:09 PM