Come check out these new and newly restocked games at Labyrinth! 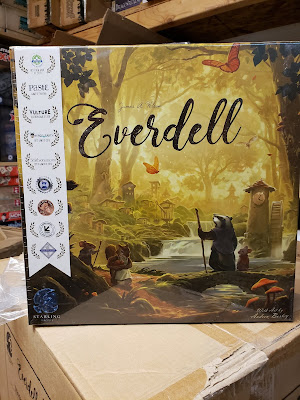 Everdell is a streamlined worker placement game that features a detailed world realized through stunning artwork. Utilizing a tableau-building mechanic, players will work to build a city of critters and constructions. Everdell is easy to learn, yet offers satisfying strategic depth and endless replayability. 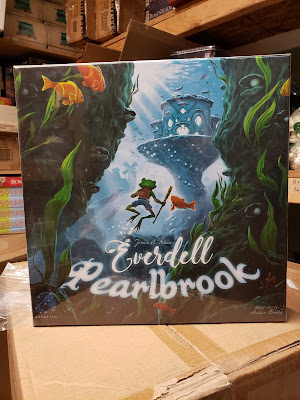 Explore a new underwater society underneath the Pearlbrook River! Pearlbrook introduces a new side board, the River board, where you'll send your Frog Ambassador to gather a new resource, pearls. You'll also encounter new aquatic critters and constructions! Collect enough pearls and you can construct fabulous Wonders and Adornments, to make your city the pride of Everdell! 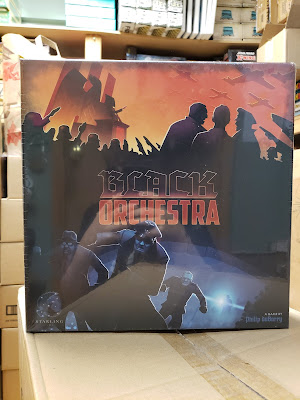 Black Orchestra is a tense and heart-pounding co-operative game based on historic events, in which concerned German officers and citizens attempted to remove Hitler from power, by any means necessary. Players take on the roles of these conspirators and engage in a high-risk game of growing suspicions, daring actions, and desperate plots. 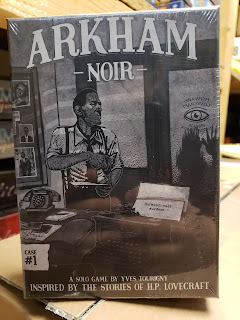 Arkham Noir is a solitaire card game inspired by the interconnected stories of H. P. Lovecraft and other authors, re-imagined as noir detective stories. Each case stands alone. Gameplay consists of adding cards to open cases, creating lines of investigation in an effort to solve them. The ultimate goal is to score five "puzzle" clue cards in order to piece together the big picture before running out of time or mental stability. Each newly shuffled deck is the start of a unique challenge, with adjustable difficulty levels to accommodate all level of players. 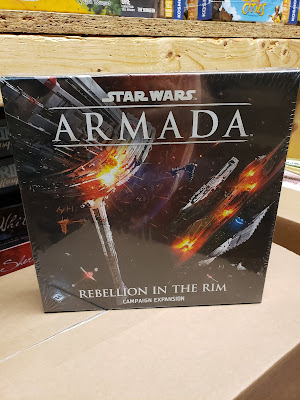 Rebellion in the Rim is an epic campaign expansion for Star Wars: Armada that takes two to six players to the farthest reaches of the galaxy, where they must fight for control of the territories and resources that may prove invaluable in the wars ahead. Using the innovative campaign mechanics first introduced in The Corellian Conflict, your team must choose to support the Galactic Empire or the Rebel Alliance over the course of multiple battles across the Rim. There, you might just earn enough campaign points to scatter the enemy forces and prove to your superiors that you are a credit to your faction, worthy of advancement and renown. 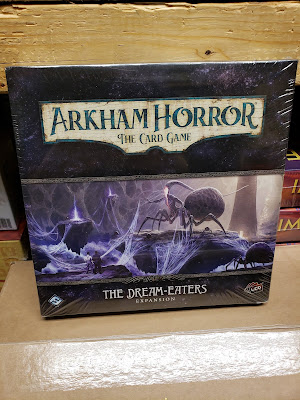 In this deluxe expansion, which kicks off the fifth cycle of Arkham Horror: The Card Game, one to four players take on the roles of either a group of investigators venturing into the Dreamlands or their companions who have been left in the waking world. Complete with 95 scenario cards to challenge your investigators and 56 player cards to strengthen them, this expansion contains the first two scenarios of The Dream-Eaters cycle; one scenario for each of these two groups. What wonders and horrors will you find lurking just beyond the reach of your waking mind? 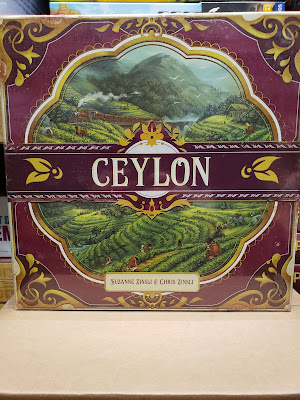 In Ceylon, players take on the role of the pioneers who developed the Ceylon tea industry. Ceylon is an area control game in which players compete to build plantations in different territories while also vying for the most profit. There are many ways to score victory points and many ways to win. Who will build the most successful business? 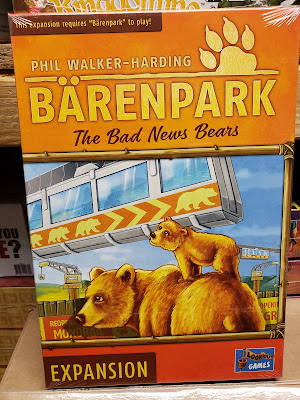 The new expansion The Bad News Bears by offers new challenges for the game Bärenpark. The newly added Grizzly bears need more space than the ones from the base game and make it more difficult to puzzle your park in a good way. Because you will need more space in order to do so, the city administration approved of a new park area you can build on. In this expansion, you are thus building your park on up to five park areas. Additionally, you are now able to build a monorail in your park which enables your customers to experience the natural behavior of the bears without disturbing them. Lastly, new achievements create new challenges for expert players of the base game. 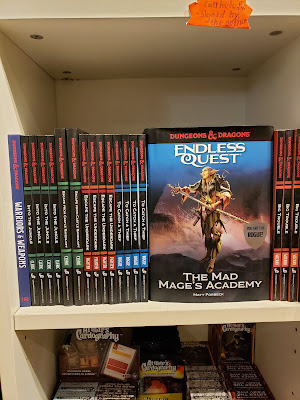 We just received several choose-your-own-adventure books set in the Dungeons & Dragons universe. Come take a look at our selections! 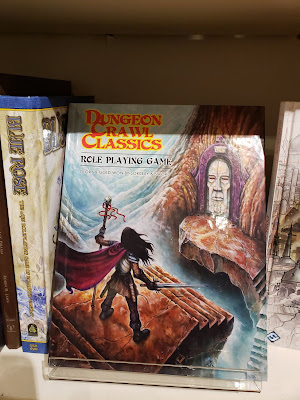 We just received a copy of Dungeon Crawl Classics for you classic RPG fans. You’re no hero. You’re an adventurer: a reaver, a cutpurse, a heathen-slayer, a tight-lipped warlock guarding long-dead secrets. You seek gold and glory, winning it with sword and spell, caked in the blood and filth of the weak, the dark, the demons, and the vanquished. There are treasures to be won deep underneath, and you shall have them. 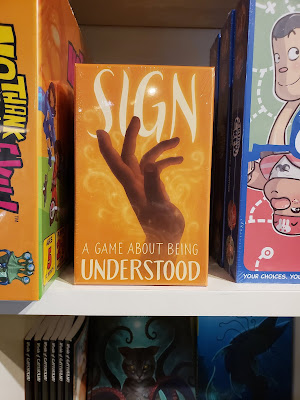 Nicaragua in the 1970s had no form of sign language. In 1977, something happened. Fifty deaf children from across the country were brought together to an experimental school in Managua. Without a shared language to express themselves, the children did the only thing they could -- they created one. In Sign, we follow a small piece of their journey.

Dialect: A Game About Language and How It Dies 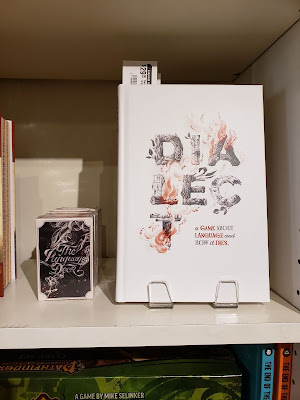 Dialect is a game about an isolated community, their language, and what it means for that language to be lost. In this game, you’ll tell the story of the Isolation by building their language. New words will come from the fundamental aspects of the community: who they are, what they believe in, and how they respond to a changing world. The base game book comes with "The Language Deck," which will help players generate the language of the game. 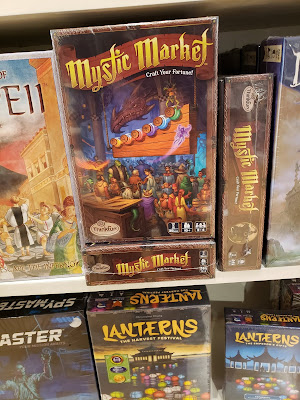 Enter a mysterious world where enchanted commodities are bought and sold for profit. Mystic Market is an exciting, fast-paced card game where players buy and sell magical potion-making ingredients. The unique Value Track ensures that the Ingredients’ values will be constantly shifting, so only the shrewdest of traders will prevail. Will you profit from selling Phoenix Feathers? Craft Potions to meddle with your opponent’s plans? Corner the market on Kraken Tentacles? Do you have what it takes to earn the largest fortune in the Enchanted World? 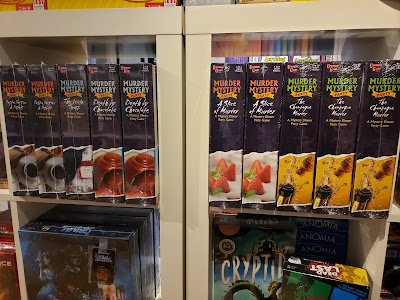 We received some more selections in the Murder Mystery Party series. Come check out these delectable mysteries! 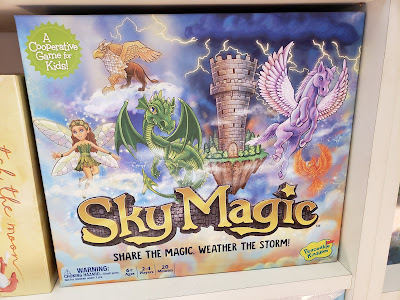 A powerful storm is brewing, so help the five enchanted friends get home before they run out of magic spells! In Sky Magic, players work as a team to navigate around storm clouds and avoid falling through the sky when the board shifts. Plan carefully, and use your magic wisely as the game continuously shifts! Kids learn strategy, co-operation, and communication. 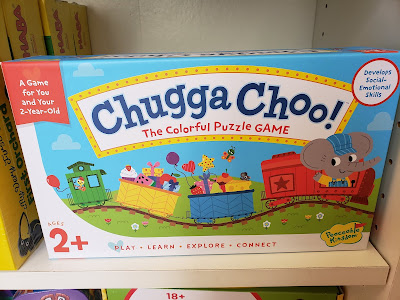 All aboard! Chugga Choo is a color-learning game and puzzle that’s perfect for the littlest engineers. Players match boxcars by color and choose wooden cargo tiles to fit in the empty boxcars. Each train is completed by adding a little caboose. Learn color-matching, spatial recognition, puzzle problem-solving and fine-motor skills.

Pick Me Up, Piggy! 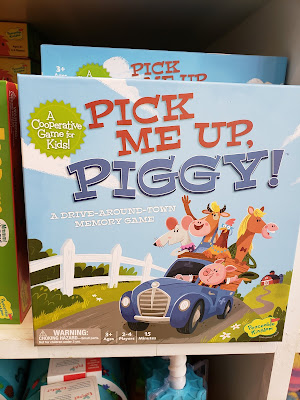 Driving a toy truck is more fun, educational and rewarding than ever when children play Pick Me Up, Piggy! In addition to using their imaginations and building fine-motor skills, children will tell stories to improve language skills, remember where to find hidden farm friends, take turns, and work cooperatively to win the game. Kids learn memory, cooperation, story-telling and using imagination. 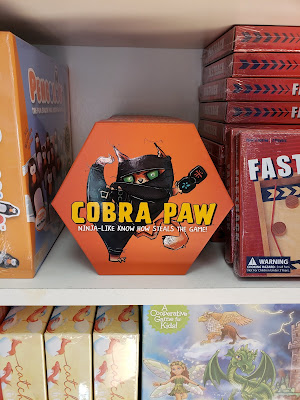 We have Cobra Paw back in stock! In Cobra Paw, players take turns rolling the dice — which feature six unique symbols — then race to grab the tile with the matching pattern before anyone else. Whoever grabs six tiles first wins! 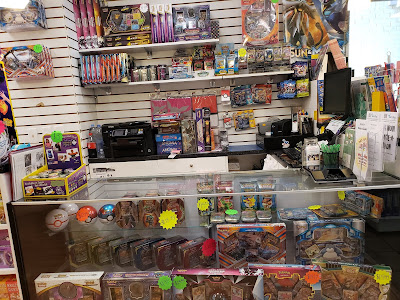 We just got a bunch of restocks of Pokemon, so come check out what we got!

Posted by Labyrinth Games at 11:01 AM