Come check out both our new and newly restocked games! 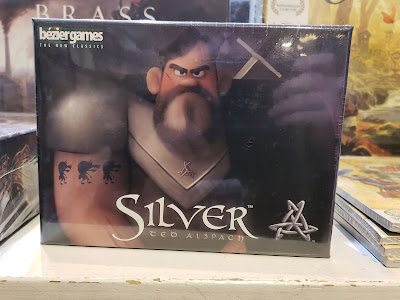 Your village has been overrun by savage werewolves, which are represented by the number on each of the cards that make up your village. To get rid of these fanged fiends faster than the neighboring villages, use your residents' special abilities and your powerful secret weapon: a silver amulet. Call for a vote when you think you have the fewest werewolves, but be careful; everyone else gets one more turn to save their own village first... Silver can be played as a standalone game or combined with Silver Bullet or other Silver decks. Each version of the game has different card abilities. 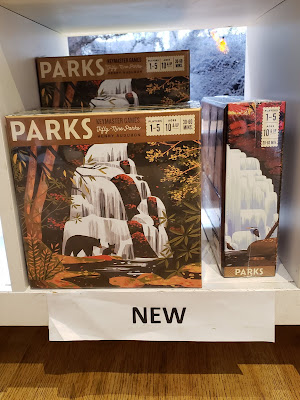 Players will take on the role of two hikers as they trek across different trails during four seasons of the year. Each trail represents one season of the year, and with each season’s passing, the trails will change and grow steadily longer. Each turn, players will send one of their hikers down the Trail. While on the Trail, hikers will land on a site—such as seeing Mountain—and takes its action, in this case gaining a Mountain token. When a hiker is on a site, other hikers cannot visit it unless they spend their campfire to share the site. Canteens and Gear can also be used to improve your access to resources through the game. When a hiker reaches the end of the trail they can spend tokens they’ve received from the Trail to visit Parks to earn points. Your goal is to have the most points at the end of the year. Welcome to PARKS! 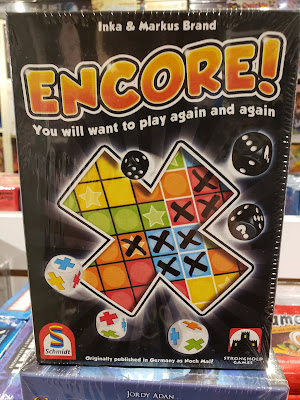 In Encore!, first published as Noch mal!, the dice determine which color and how many spaces you can mark off on your playing sheet — but the starting player may first evaluate what everyone's doing, then remove two dice, leaving everyone else to make their choices with the dice that remain... 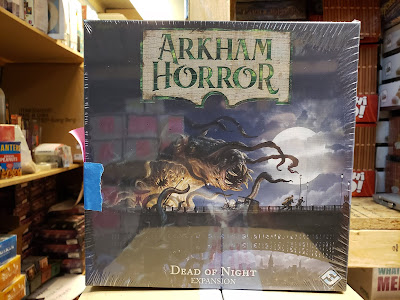 In Dead of Night, investigators explore the facets of Arkham best left unseen in the light of day. Organized crime builds a strong foothold in the city, secret cults labor for a dark master, an alien moon hangs overhead, and unknowable horrors stalk the night. This expansion includes two all-new scenarios, new encounters for every location in Arkham, new monsters and anomalies, a new monster deck holder, and four new investigators to face these fresh horrors, armed with new spells, items, and allies. 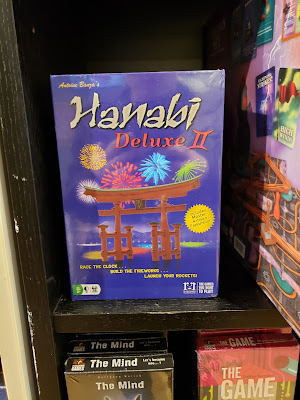 Hanabi Deluxe II is similar to the Hanabi Deluxe edition first released in 2013, which features the same gameplay as the original game, but with the cards being replaced by Mah Jhong-style tiles. Hanabi Deluxe II includes six unique tiles that comprise the "Master Artisan" expansion. 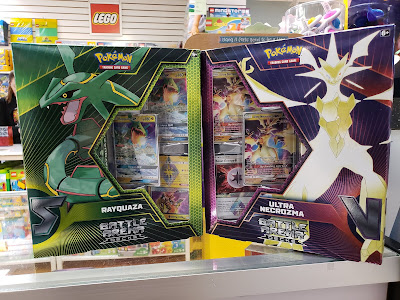 Looking to grab a deck and challenge a friend (or rival) to a Pokémon TCG battle? The new Battle Arena Decks starring Rayquaza-GX and Ultra Necrozma-GX might be what you're looking for! These 60-card decks are ready to play right away, with powerful cards and winning strategies worthy of an ace Trainer. Each deck is led by an exceptional Legendary Pokémon-GX and includes 9 foil cards. You also get useful accessories for playing the game such as a 2-player playmat, damage counters, a metallic coin, and more. Pick up these two Pokémon TCG: Battle Arena Decks, and let the battle begin! 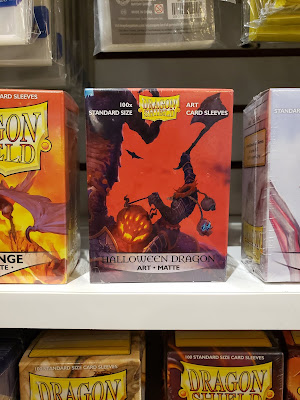 We just received some new Dragon Shield sleeves that are Halloween art themed. Come check them out and get in the spirit of the season!

Call to Adventure: Name of the Wind 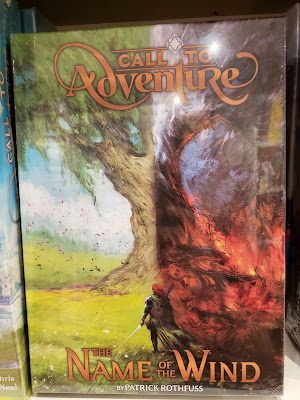 Call to Adventure: Name of the Wind is a 75-card expansion for Call to Adventure based on The Kingkiller Chronicles by Patrick Rothfuss. This expansion, along with the others that will likely follow it, adds new challenges, new destinies, and mechanisms unique to the author's world to the base game. Plus, it is super gorgeous, and if you love Call to Adventure then this expansion will be a good addition to an already beloved game. 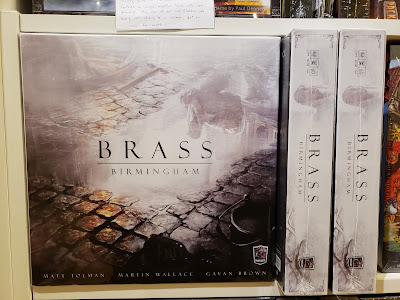 Brought to us by gritty, British accents, Brass Birmingham is now back in stock at Labyrinth! This popular economic strategy game plays with two to four players and is the recipient of the 2018 Golden Geek Best Strategy Board Game Winner, as well as a nominee for several other big gaming awards. It is also the sequel to the original title, Brass. 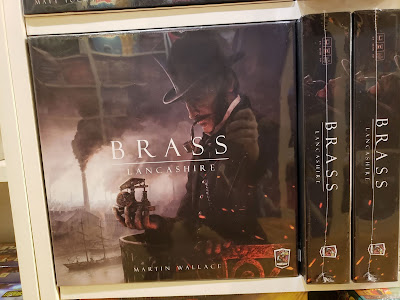 Now back in stock at Labyrinth, Brass Lancashire is the reboot of the original game, Brass, in which players compete to build the best economic, cotton-manufacturing engine in Lancashire during the Industrial Revolution. The 2018 reboot has new artwork as well as some rules changes made to increase the game's efficiency at different numbers of players, increasing the accessibility of the game for those who would like to play with two or three rather than the full four. 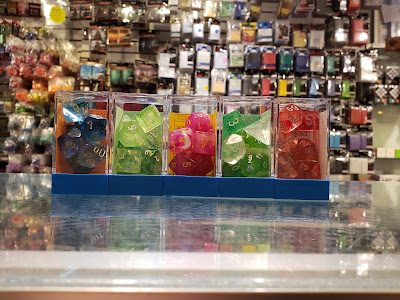 We just received some more Chessex dice sets! Come check out these glow-in-the-dark sets; they're the perfect thematic choice for spooky RPGs and board games to play in the dark. 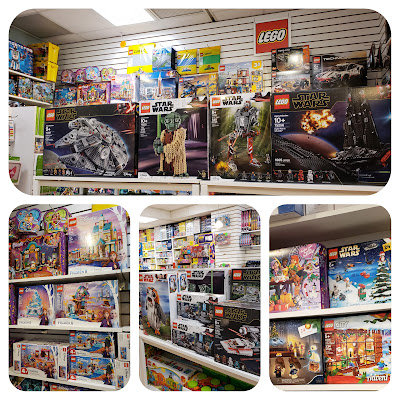 We just received a lot of new Lego sets; come check out all the new Star Wars, Frozen, and Advent Calendar sets! 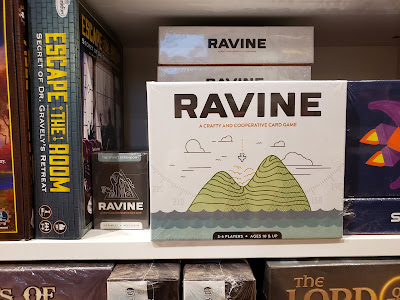 Ravine is back at Labyrinth by popular demand! This cooperative survival game plays with three to six players, unless you pick up the expansion, The Spirits, which allows for up to nine players. We also have restocked The Spirits. 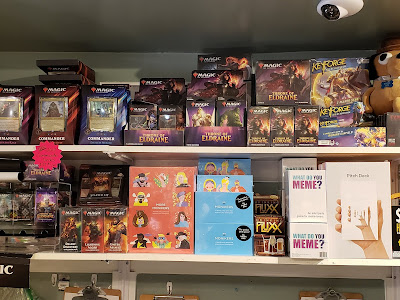 We Rate Dogs: The Card Game 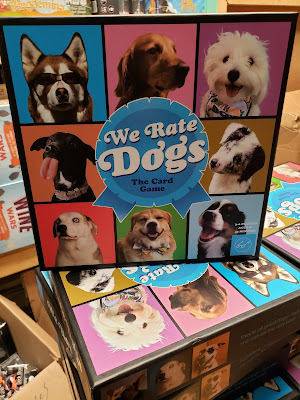 We just got We Rate Dogs: The Card Game in stock. It is the card game in which all the dogs are 10/10s but only one can be the Goodest Dog. This game is for three to six players and takes place over a series of judging rounds during which players can play event cards to change scoring metrics, to distract the competition, or even to change the judging category of the current round.

Posted by Labyrinth Games at 11:37 AM