Check out our new and newly restocked games! 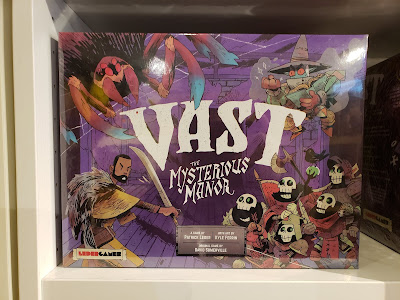 Vast: The Mysterious Manor is a gorgeous, asymmetrical, strategy game in which the character you choose will determine the way you play the game. Each character option in The Mysterious Manor comes with their own unique victory conditions and abilities. For instance, the Paladin is obsessed with destroying the Spider, and the Manor is interested in shifting manor tiles in order to trace specific lines through the manor. The game uses tiles to construct the layout of the manor as the game progresses, creating a unique experience for each playthrough. The game also plays with one to five players, meaning you can enjoy it with others or by yourself in the built-in solo mode. Vast: The Mysterious Manor is compatible with Vast: The Crystal Caverns and Vast: The Fearsome Foes, and it is another gorgeously constructed game from Patrick Leder. 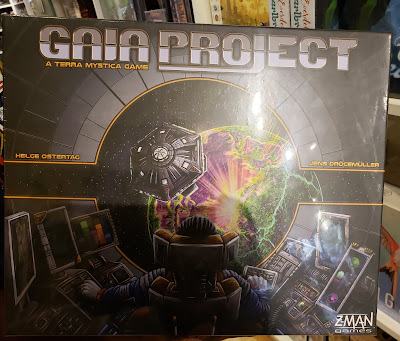 Touted as a follow-up to Terra Mystica, Gaia Project, while not a new game, just got a copy at Labyrinth. If you are a fan of space conquest and territory control with lots of modular board pieces then you should come grab your copy while it's still here! 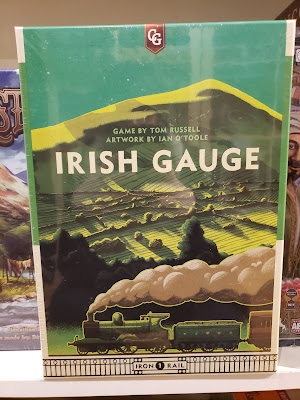 Having just come out this past September, Irish Gauge is a bidding, route-building, stock holding game in which three to five players build railroads across Ireland while trying to get the most out of their investments. It is now in stock at Labyrinth! 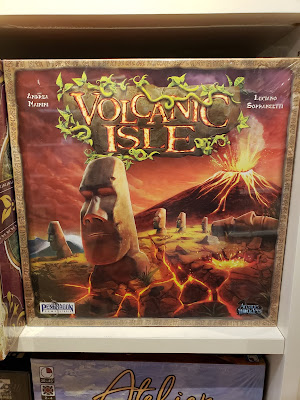 Volcanic Isle is a resource management and push your luck style game in which two to four players strive to earn victory points, while risking the destruction of the island, which ultimately ends the game after a certain point. 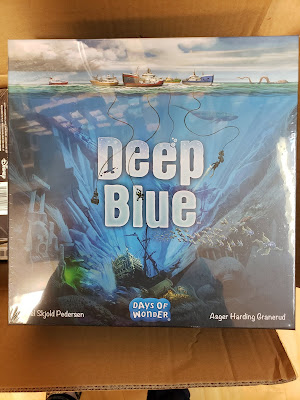 Deep Blue is a press-your-luck and engine-building, family game in which players dive for wealth and may join and benefit from other player's diving fortunes. In this game, players have to collect the right crew of divers, sailors, and archeologists, race to wreck sites to claim the best spots to dive from, and scout the seas to discover new wrecks. Players have to take risks if they want to be the most wealthy diver! Now in stock at Labyrinth. 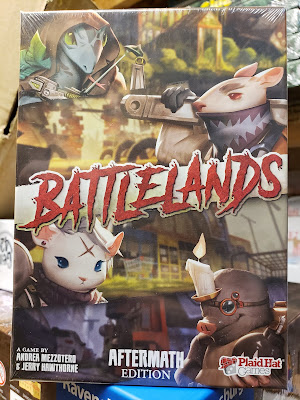 BattleLands is a fast and furious game of turf warfare for 3-5 players. Send your fighters to seize key locations, or recruit even fiercer warriors who can help you turn the tide! Use your faction's abilities to play dirty and keep your opponents guessing your next move! Set in the world of the upcoming Adventure Book game Aftermath, BattleLands: Aftermath Edition takes place in a post-apocalyptic land in which humans are extinct. Now the animals of the world try to survive by competing for territory, food, and precious technology. 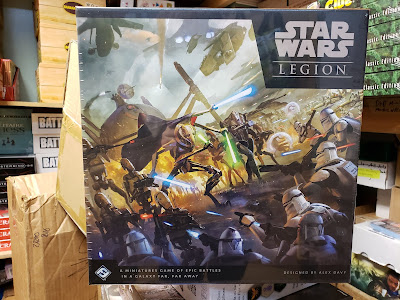 This Core Set invites you to enter a completely new era of infantry battles in the Star Wars galaxy, pitting the overwhelming Separatist droid forces against the Republic’s crack armies of clone troopers and Jedi Knights. As you do, you’ll assemble a force of the Clone Wars' most iconic heroes, villains, troopers, and vehicles, including Obi-Wan Kenobi and General Grievous. In addition to introducing the Galactic Republic and Separatist Alliance to the game, this Core Set contains all the cards, tools and tokens you need to begin staging your own Star Wars battles right away, making this the perfect starting point to begin building your Star Wars: Legion collection! 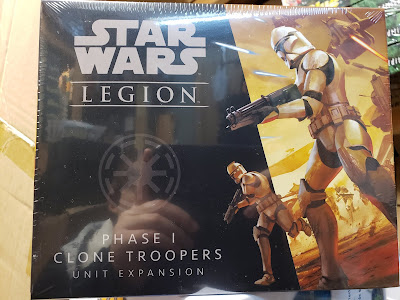 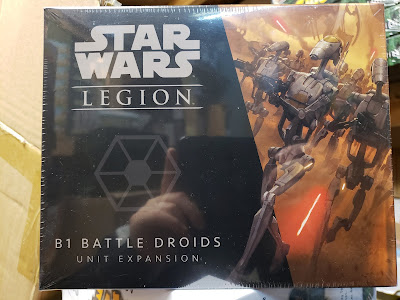 Check out these new expansions to Star Wars Legion. The B1 Battle Droids Unit Expansion gives you the chance to supplement your Separatist Alliance forces with even more battle droids, while the Phase I Clone Troopers Unit Expansion contains a full unit of seven unique, unpainted Phase I Clone miniatures. 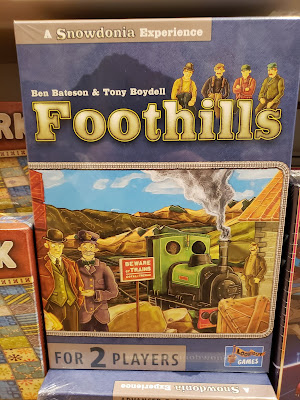 Foothills is a tactical and intriguing two-player card game from new designer Ben Bateson and the designer of Snowdonia, Tony Boydell that came out this past September and is now in stock at Labyrinth. Using your five action cards cleverly, collect resources, remove rubble, build track and stations, and use the action spaces you unlock, all the while collecting more victory points than your opponent. In the end, the player with the most victory points wins! 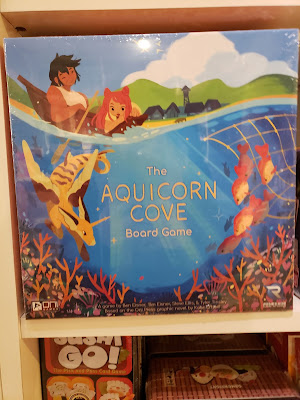 In the co-operative game, Aquicorn Cove, 2-4 players take on the roles of members of a small fishing village struggling to survive while maintaining a balance with the natural world. To win, the villagers must feed and grow their village, while helping to restore the health of the reef and aquatic ecosystem. The villagers are fortunate, though, and the waters of their cove are home to the beautiful and benevolent aquicorns, as well as the wondrous reef guardian Aure, who can help them both to understand the impact humans are having on the environment and to save the village. It will be out at Labyrinth on Wednesday the 23rd. 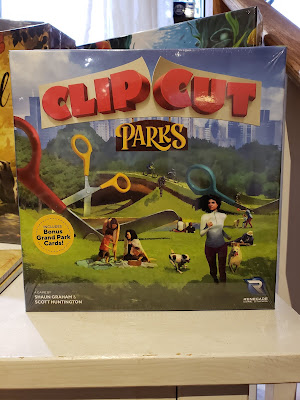 ClipCut Parks is a first of its kind, innovating roll-and-write gameplay as the first roll-and-cut game! The city needs your help! The mayor has called on you to create a set of gorgeous parks with greenery to beautify the urban landscape. With a pair of scissors and a plan, use your snipping talents to clip a park full of dazzling multi-colored features. The first player to complete five park cards wins! 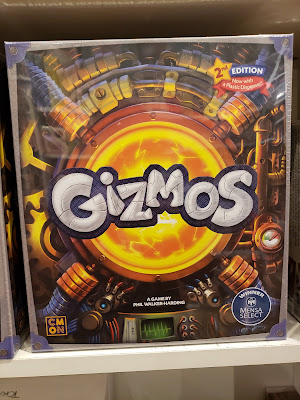 Gizmos Second Edition is in stock at Labyrinth! The new edition of Gizmos comes with an improved plastic dispenser as opposed to the original cardboard one from the first edition. 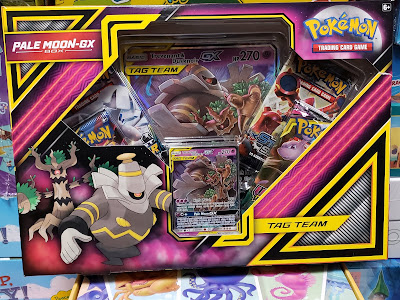 There is a new GX Tag Team here just in time for Halloween. In this box is a Tag Team card with Trevenant and Dusknoir, both of which are Ghost types. 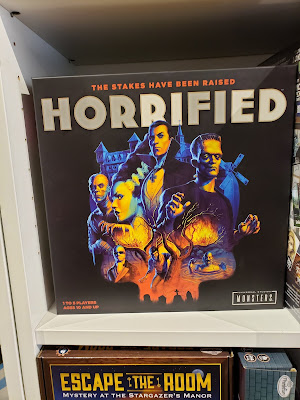 The stakes have been raised. Imagine living in a place so wretched that it's not plagued by one, two, or even three monsters — but seven of the most horrifying fiends! In this game, you'll come face to face with them all as you work together to rid the town of the maniacal or misunderstood creatures…before it's too late. Horrified includes high-quality sculpted miniatures (Frankenstein, The Bride of Frankenstein, The Wolf Man, Dracula, The Mummy, The Invisible Man, Creature from the Black Lagoon). Its innovative, easy-to-learn, cooperative gameplay has players working together against the monsters with varying levels of difficulty. Just as each monster is unique, they require different strategies and tactics to be defeated.

Posted by Labyrinth Games at 11:59 AM