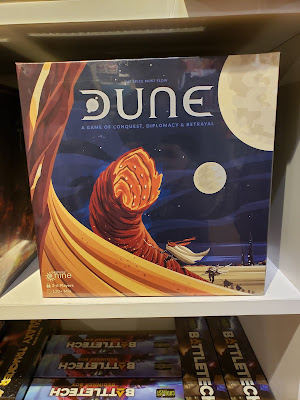 Father! The sleeper has awakened! We are happy to tell you all that the latest edition of the beloved classic, Dune, is now in stock at Labyrinth. The new printing of Dune modernizes the box art, provides all-new components, and features a revised rules set. If you (like me) are a fan of Twilight Imperium and of Golden Age science fiction, then this will be a good addition to your collection. Dune is a unique experience because its mechanics deeply evoke the atmosphere and story of the Dune novels, which were the inspiration for the board game as well as a feature-length film directed by David Lynch. The in-depth politicking and potential back-stabbing that the game involves makes it not only memorable but also highly replayable, especially given each faction's unique functions and abilities. 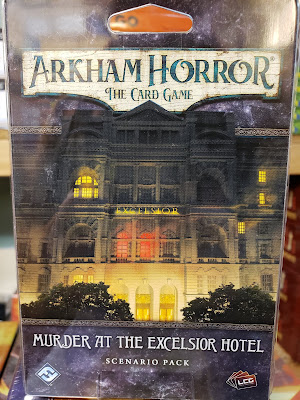 Reports of strange occurrences have been circulating around Arkham about the prestigious Excelsior Hotel: disappearances, bizarre sightings, sudden closures that go on for days without warning. You tried talking to the police about these suspicious claims, but they dismissed you with little more than a glance up from their desks. So, when you receive a note promising answers if you come to the mysterious location, you feel compelled to make the meeting.

Legend of the Five Rings: A Champion's Foresight 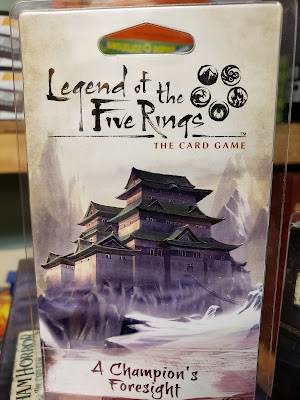 Mysteries pervade every corner of Rokugan, and few can unravel them like the Kitsuki Investigators of the Dragon Clan. Placing an emphasis on physical evidence, the Kitsuki method of investigation is known throughout the Emerald Empire—though not all hold it high regard.  Now, you can harness the power of these investigations with Shiro Kitsuki (A Champion’s Foresight, 89), the Kitsuki family’s ancient castle. After a conflict is declared, you may name a card, each time your opponent plays a card with that name during the conflict, you can claim an unclaimed ring and all fate on it. This new expansion is now in stock at Labyrinth! 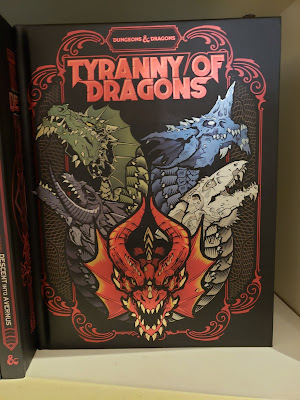 In an audacious bid for power, the Cult of the Dragon leads the charge in an unholy campaign to bring Tiamat back to Faerûn. Alongside their dragon allies and the Red Wizards of Thay, they sweep from town to town, laying waste to all those who oppose them and gathering a hoard of riches for their dread queen. The threat of annihilation has become so dire that groups as disparate as the Harpers and Zhentarim are banding together to fight the cult. The heroes must succeed, or Faerûn will succumb to draconic tyranny. In the end, the world will never be the same. 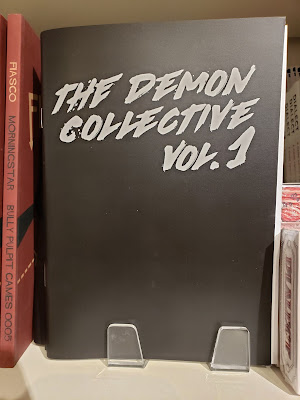 The Demon Collective Vol. 1 is a new RPG containing four horror adventures all written by trans and non-binary authors for your favorite tabletop RPG--designed to be easily slotted into existing campaigns or run as one-shots for new and experienced parties. The collection features writing by Camilla Greer (one of Labyrinth's own employees), Comrade Pollux, Mabel Harper, and David Shugars. Edited by Fiona Geist, with art by Lauren Bryce. The Demon Collective Vol. 1 recently finished its Kickstarter campaign and met with awesome success. Come get your copy now! 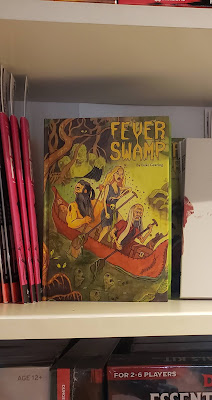 Fever Swamp is a hex-crawl sandbox adventure compatible with Lamentations of the Flame Princess and most other Dungeons & Dragons clones. Fever Swamp was written by Young Master Luke Gearing, previously famed for his contributions to the world's favorite outsider role-playing 'zine, The Undercroft, and illustrated by Andrew Walter, who surreptitiously inserted sigil magic into his work on a previous publication, Crypts of Indormancy, to uncertain ends. 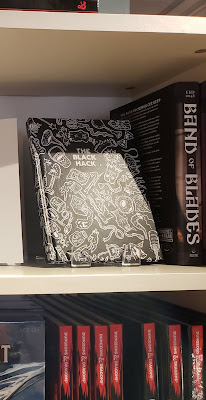 We now have The Black Hack in stock at Labyrinth. The new expanded Second Edition rules now include a wealth of extra material and tools for every Black Hack GM. The main rules still only take up 30 pages, but the full edition adds over 90 more pages of NPCs, monsters, dungeons, traps, magic items and much more. The Black Hack is a super-streamlined roleplaying game that uses the Original 1970s Fantasy Roleplaying Game as a base, and could well be the most straightforward modern OSR compatible clone available. If speed of play and character creation, compatibility, and simple - yet elegant rules are what you yearn for. Look no further! 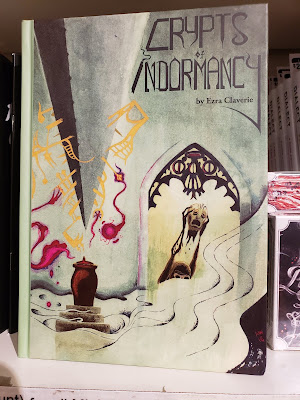 Crypts of Indormancy is now at Labyrinth! Crypts of Indormancy is a location-based adventure possessing ecumenical compatibility with Dungeons & Dragons and its descendants. Appropriate for any number and level of players, all who enter the tomb of Tuuz without their wits ready will likely come undone. For Thuuz’s heirs did not leave his bones helpless and unguarded. 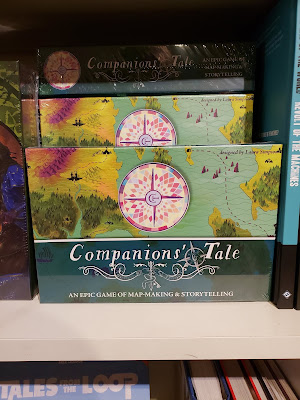 Companions’ Tale is a story and mapmaking game. The players take on the roles of Companions and tell the story of a hero. The hero is a cipher who is viewed through the opinionated perspectives of the Companions that the players control. Create the Hero’s journey and learn just who your hero is. 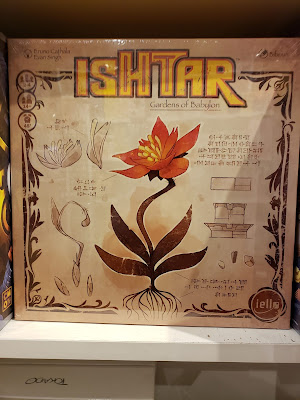 From the award-winning designer Bruno Cathala, Ishtar is a game in which you play the role of a gardener aiming to transform the dry desert into the Lost Hanging Gardens of Babylon. To accomplish your mission, you will have to plant flowers, which, if you place them well, can help you gather precious gems and activate actions. Whether to buy Trees (which will block the link between two Flower spots, as well as earning you points) or to purchase upgrades (such as getting two more points per Tree card at the end of the game), collecting gems will be a crucial part of the game. Get them before your opponents, recruit apprentices, send them to earn points in the copses of flowers you have created, block others and think carefully of the upgrades to purchase if you want to become the best gardener at the end of the game! 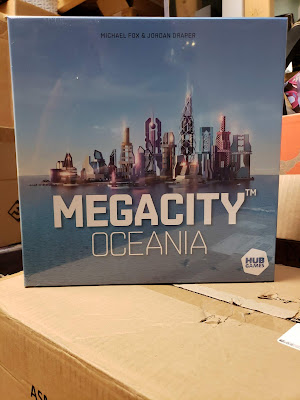 Welcome to the future of city building!
GOLD COAST, AUSTRALIA, 2100. Construction of the first oceanic MegaCity begins. Tackling overpopulation and rising sea levels has become the planet’s number one priority. Advances in technology enable us to build towering superstructures on immense floating platforms. You are the next generation of architects called upon to design and build these marvels of structural engineering. Race to collect contracts, construct beautiful buildings and vie for awards as a unique MegaCity emerges each time you play. It’s a competitive business where prestige points are everything! A combination of dexterity and light strategy, MegaCity: Oceania is the city building game in which you actually build a unique city every time. 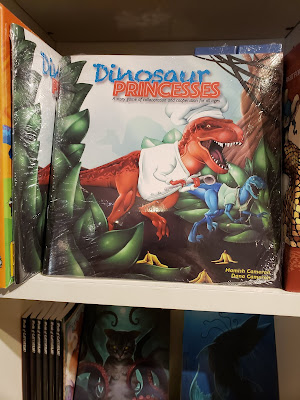 Dinosaur Princesses is a rules-lite play-heavy collaborative tabletop role-playing game (TTRPG) about friends who are dinosaurs who are princesses solving problems together! Decide what type of Dinosaur you are (a t-rex, ankylosaurs, or platypus perhaps!) and what type of Princess you are (maybe an aquanaut, zookeeper, or chef!). Remember that, just like your type of dinosaur isn’t limited by strict definitions of “dinosaur” your princess isn’t limited to being a girl—everyone can be a Dinosaur Princess! After you decide what your Dinosaur Princess is like, you then start the very important step of drawing and coloring your Dinosaur Princess. Now gather your friends, build up group dice pool, and overcome all the obstacles and problems that the Paleontologist throws your way! Dinosaur Princesses is a story game of collaboration and cooperation for all ages. Great for new TTRPG players and experienced players alike.

Valley of the Vikings 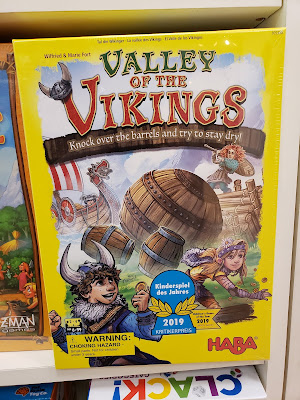 In Tal der Wikinger (Valley of the Vikings), the annual barrel bowling contest is taking place. Now courage, skill and risk-taking are required so that the players use the ball to knock down the right barrels, and cleverly position their Vikings on the dock. But the player who ventures too far and is first to fall in the water goes away empty-handed. The player who captures the most gold coins wins. Valley of the Vikings is the winner of the Kinderspiel des Jahres this year and is a gem that is now in stock at Labyrinth. 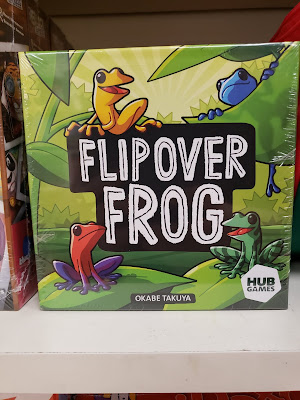 The flippin' frogs are coming! Help your brightly colored frogs take control of your little corner of the rainforest! Cleverly place frogs on the game board to flip adjacent tiles, hiding some frogs and revealing others. Each player is given a secret Frog Token at the beginning of the game, determining what colour frogs they are trying to get on to the board. After dealing three tiles to each player, the game begins. Tiles can be placed on any empty space on the 4x4 board, or on the back of any face down tile. Frogs may NOT be placed on top of face up tiles. Players keep playing a tile and drawing back up to a hand of three until either no more tiles can be played or the board has sixteen face up frogs on show. This triggers the end of the game, and the player with the most frogs face up is the winner. Plan ahead, watch out for snakes, and flip your way to victory! 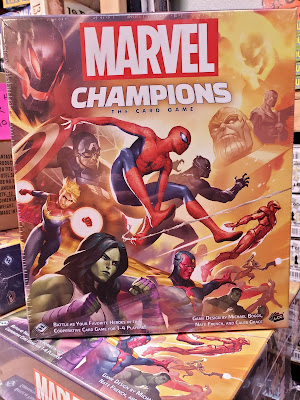 We've already got them  in stock! Come check out one of the coolest LCGs of recent times, Marvel Champions. Iron Man and Black Panther team up to stop Rhino from rampaging through the streets of New York. Captain Marvel and Spider-Man battle Ultron as he threatens global annihilation. Do you have what it takes to join the ranks of these legendary heroes and become a champion? Jump into the Marvel Universe with Marvel Champions: The Card Game, a cooperative living card game for one to four players! Marvel Champions: The Card Game invites players to embody iconic heroes from the Marvel Universe as they battle to stop infamous villains from enacting their devious schemes. 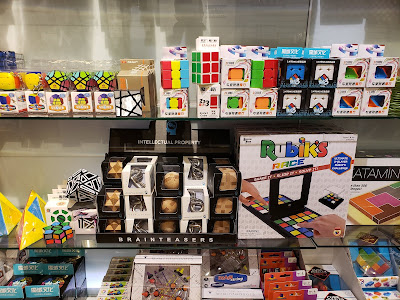 Come check out our new Ghost Cubes and our myriad assortment of puzzle cubes. These new cubes are sure to provide a refreshing challenge. 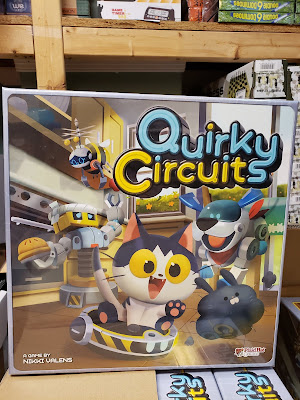 Quirky Circuits is a cooperative game of robot programming silliness for two to four players. Each player contributes to the programming of an adorable robo-friend. But be warned - no one knows what commands the other players will be tossing in! Help the little robot complete its task before their battery runs out! With 24 scenarios of increasing intensity, Quirky Circuits is guaranteed to provide hours of brain-bending fun. 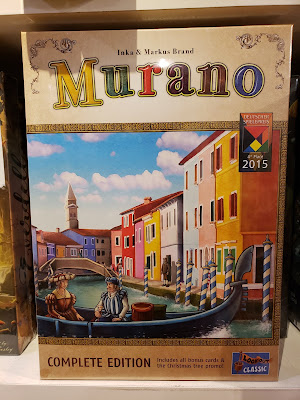 This is a reprint of Murano that is now in stock at Labyrinth. For those unfamiliar with the game it is an area control, tile-placing, and pick-up-and-deliver style game for two to four players in which players operate gondolas and attempt to create beautiful glassworks (a staple of the real Murano) in order to score victory points from tourists. 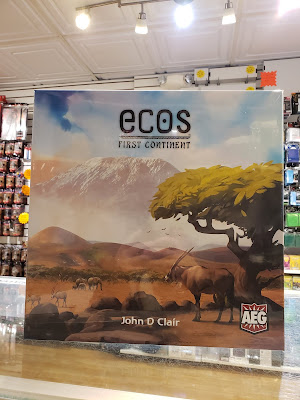 In Ecos: First Continent, players are forces of nature molding the planet, but with competing visions of its grandeur. You have the chance to create a part of the world, similar but different to the one we know. Which landscapes, habitats, and species thrive will be up to you. Gameplay in Ecos is simultaneous. Each round, one player reveals element tokens from the element bag, giving all players the opportunity to complete a card from their tableau and shape the continent to their own purpose. Elements that cannot be used can be converted into energy cubes or additional cards in hand or they can be added to your tableau to give you greater options as the game evolves. Mountain ranges, jungle, rivers, seas, islands and savanna, each with their own fauna, all lie within the scope of the players' options. 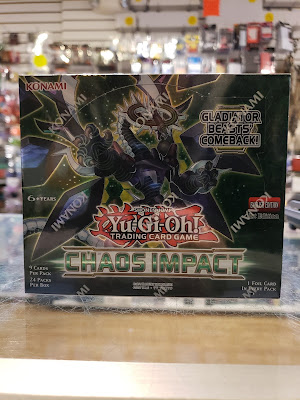 We've got some Yu-Gi-Oh! Chaos Impact boosters and booster boxes in stock now at Labyrinth!

Posted by Labyrinth Games at 1:35 PM