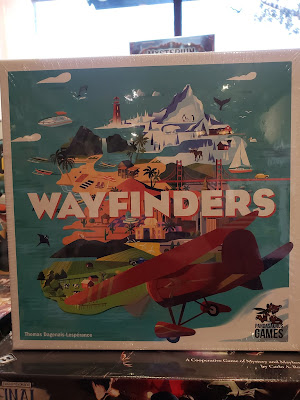 Engines purring, goggles down — the seaplane is set for take-off! Welcome to the whimsical world of Wayfinders in which intrepid explorers race to chart new paths through the skies. You will need to think on your feet and outfit your planes with the right gear to arrive safely — but building hangars on islands and stocking them with parts can help you zip around with ease! Wheels up — adventure awaits! Wayfinders is a new game for two to four players that contains elements of worker placement, push your luck, and route and network building. 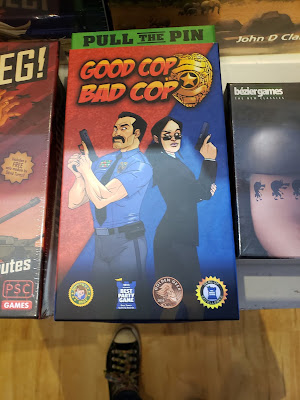 Good Cop Bad Cop is a 52 card hidden identity, deduction game where each player takes on the role of a law enforcement officer in a corrupt district. Players must investigate others to figure out who is on their side, and take down the opposing leader in the process. 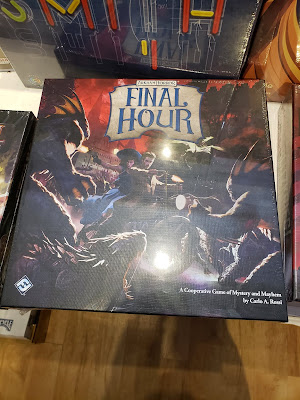 You arrived too late to stop the loathsome rite, and a monstrous, transdimensional Ancient One tears through reality. An iridescent rift slashes across the darkened skies, heralding the nightmarish creatures that pour into the hallowed buildings of Miskatonic University. As howls and screams cut through the night, there is only one path left for your fearless investigators—hold back the horde long enough to somehow reverse the summoning.

Arkham Horror: Final Hour is a stand-alone fully co-operative, fast-paced board game for one to four players. An endless tide of monsters sweeps across the Miskatonic University campus, and you must hold them back, all while searching desperately for the ritual components you need to put an end to this insanity. Playable in under 60 minutes, your fate depends on cooperation between you and your fellow investigators. The odds against you are astronomical, but if you don’t succeed, this will indeed be the final hour for Arkham...and the world.

Legend of the Five Rings: The Emperor's Legion 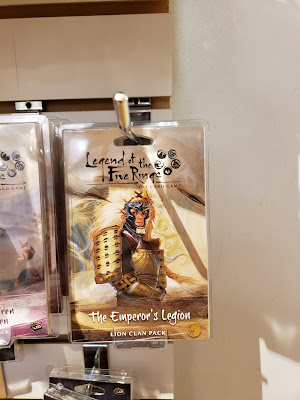 On the blood-stained battlefields of Rokugan, the skill and prowess of the Lion Clan is legendary. From Matsu warriors to Akodo tacticians to Kitsu who utilize the past itself to overwhelm their foes in combat, the tools of the Lion clan are extensive. The clan serves as the Right Hand of the Emperor, and to face a Lion in battle is to face death itself. The Emperor’s Legion spotlights the Lion Clan with 78 new cards (three copies of twenty-five different cards and one copy each of three different cards) for Legend of the Five Rings: The Card Game. Here, look for an emphasis on recursion, revenge, and righteousness.

Mansions of Madness: Path of the Serpent 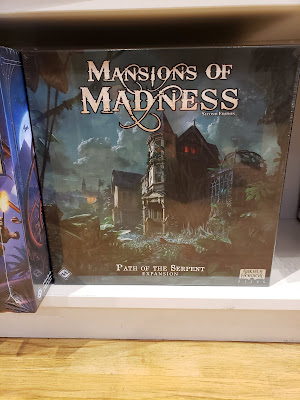 For all its beauty, the jungle conceals many perils. From unrelenting heat and dwindling supplies to cursed idols and booby-trapped temples, any who would dare face these dangers are sure to long for the relative safety of the city they knew. Now in Mansions of Madness: Path of the Serpent, you take on the role of Arkham’s bravest investigators who must step into the unexplored wilderness of the Amazon jungle and explore crumbling ruins, discover the secrets of lost civilizations, and stop a serpent’s curse before the world descends into chaos. In three new scenarios, you will battle horrifying serpent creatures, face stone monstrosities that come to life, and beat the ever-present danger of being lost to the jungle forever. Are you ready for a new challenge? 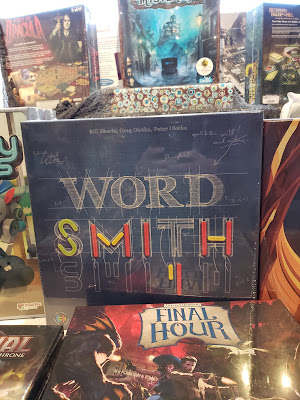 Wordsmith is all about discovering words, but instead of whole letters, you just have letter pieces in four different shapes. This brain-tickling game for 1 to 4 players is a fast-paced, real-time word building frenzy! All players create words simultaneously from their letter pieces. Each word can only be made and scored once, so a thrilling challenge of word discovery begins. Which words will you discover in your letter pieces? Longer words earn you more points, but you also want to make all six words before the round is over. And of course there is a twist: Although you can discard letter pieces to make a word, you get bonus points when you can limit the number of pieces you have to discard. 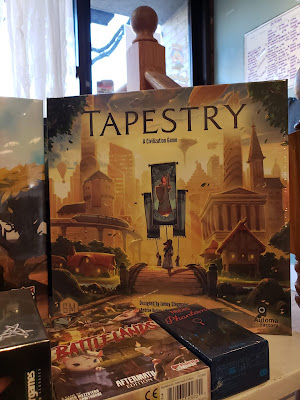 Tapestry is a competitive, asymmetric, medium-weight civilization-building game. Tapestry is a 2-hour civilization game for 1-5 players designed by Jamey Stegmaier. Create the civilization with the most storied history, starting at the beginning of humankind and reaching into the future. The paths you choose will vary greatly from real-world events or people—your civilization is unique! In Tapestry, you start from nothing and advance on any of the 4 advancement tracks (science, technology, exploration, and military) to earn progressively better benefits. You can focus on a specific track or take a more balanced approach. You will also improve your income, build your capital city, leverage your asymmetric abilities, earn victory points, and gain tapestry cards that will tell the story of your civilization. If you like A Feast for Odin, Mombasa, and Russian Railroads, we think you will enjoy creating your own unique civilization in Tapestry. 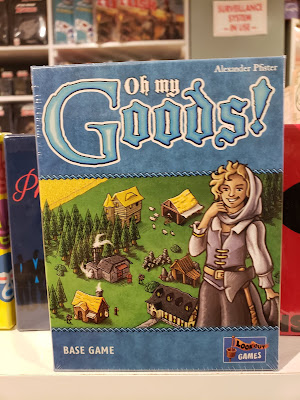 In Oh My Goods!, first released as Royal Goods, players are European artisans during the Middle Ages who produce tools, barrels, glass windows, and many other goods. Only if you make clever use of your production chains will you have the most victory points at the end of the game. This game is now in stock at Labyrinth! 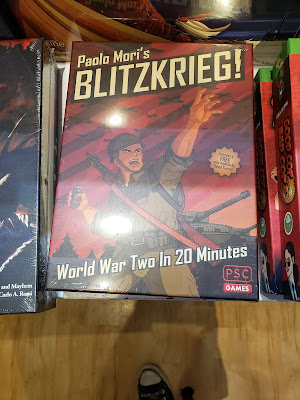 Recreate World War Two in 20 minutes! The perfect wargame for non-wargamers, Blitzkrieg! allows two players to battle across the War’s most iconic theaters, winning key campaigns and building military might.  Players draw army tokens from a bag to determine their starting forces and to replenish their losses. Rather than ‘fighting’ battles with dice or cards, players allocate their military resources to each theater’s campaigns, winning victory points, further resources, special weapons, and strategic advantages as they play. Includes Solo mode by Dávid Turczi. 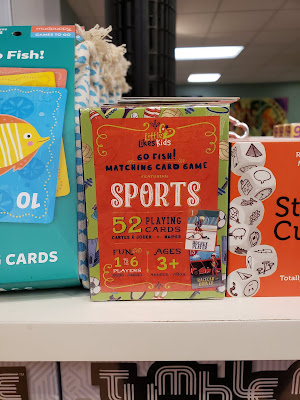 Looking for a simple but fun classic to play with your kids who love sports? Well we now have a Go Fish!-style card game available that is themed after sports. 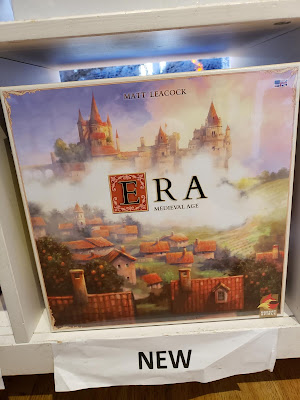 Era: Medieval Age serves as the spiritual successor to Roll Through The Ages. While Roll Through The Ages was a pioneer for roll-and-write-style games, Era is a pioneer for roll-and-build! In Era, your dice represent different classes of medieval society as players attempt to build the most prosperous city. The "build" comes into play as players actually build their cities on their boards. You will use beautifully modeled three-dimensional components such as walls, keeps, farms, and other structures. By the end of the game, each player will have a unique city of their very own! Era: Medieval Age is made even more challenging as players interact with each other in ways such as extortion, scorched earth, and, of course, disease! Hey, this is the Medieval Age, right? Speaking of which, Era serves as the first of a new series of standalone roll-and-build games from Matt Leacock and eggertspiele! 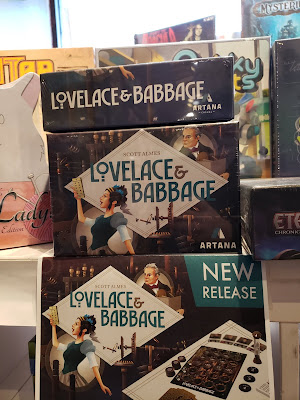 In Lovelace & Babbage, players adopt the roles of 19th-century computing pioneers including Ada Lovelace and Charles Babbage. Each player has their own unique abilities and subroutines, providing asymmetric gameplay and new challenges. Programming an early mechanical engine, players complete tasks for famous 19th-century patrons who award influence in areas such as art, science, and engineering. Turns take place in real-time with players competing over a mix of personal and shared goals as they all program the engine simultaneously. Speed and accuracy are both rewarded, so different play styles and levels of ability can all succeed.

Dark Souls The Board Game 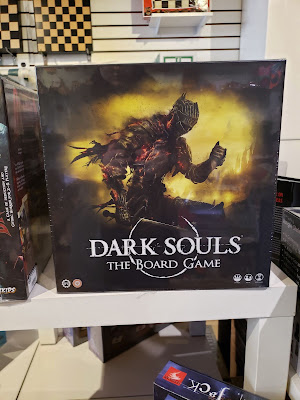 Dark Souls™ - The Board Game is a strategically challenging, deeply immersive combat exploration game for 1-4 players set in the Dark Souls™ universe. Players choose from a number of core character classes and explore dangerous locations full of monsters, treasures, and deadly boss fights. Designed specifically for the Dark Souls™ universe and introducing a number of innovative gameplay mechanics, with world-class miniatures faithful to the rich universe, this game delivers an experience that captures the very essence of the original video games. 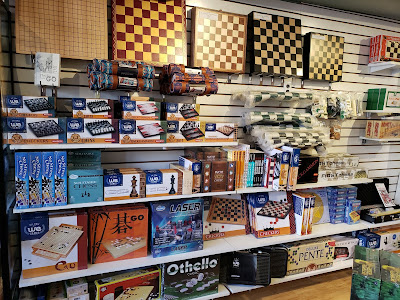 We just received a significant restock of checkers, chess, Go!, backgammon, and cribbage products. Please feel free to come on down and check it out! 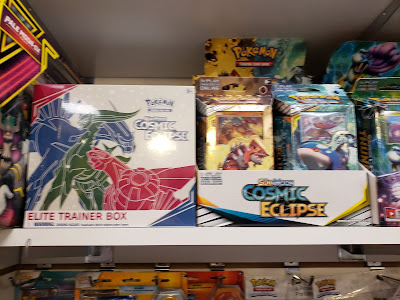 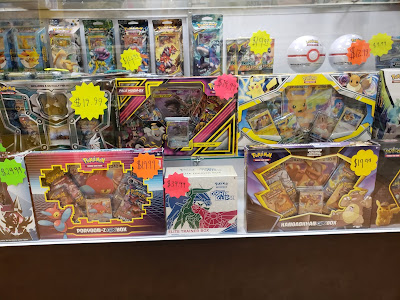 As many Pokemon fans are aware, the new set of Pokemon, Cosmic Eclipse just came out, and we currently have Build & Battle boxes available for sealed circuit, as well as Elite Trainer Boxes from the new set. We also have an adorable Pikachu and Evee GX set available for purchase now at Labyrinth, featuring a very special Evee card with unique fan art on it! 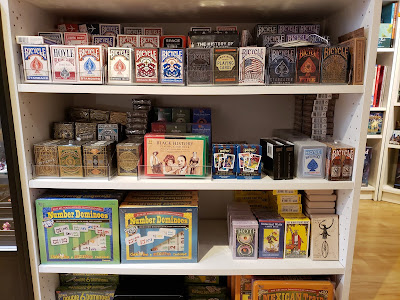 We've got a whole lot of playing cards back in stock, so come on down to check out these beautiful sets, including poker-size cards, plastic cards, pinochle, and bridge-size cards.

Posted by Labyrinth Games at 4:46 PM