Come check out these titles for great games to play on New Year's Eve! 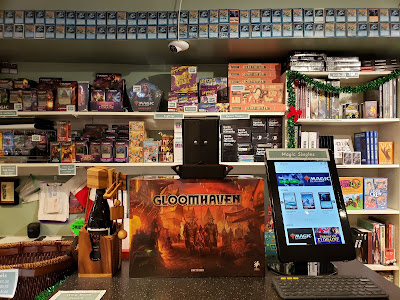 For any adults looking to have fun this New Year's Eve, the games in our 18 years-old and up section are great for a party or get-together with friends. 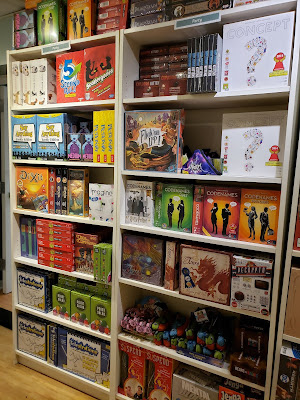 Check out these great party games! These are perfect for large groups, looking to celebrate the New Year. 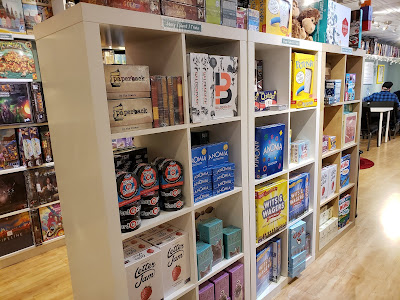 For those who enjoy word games and story games, come check some of these titles out. We have classic word games as well as some modern titles that are sure to bring everyone together. 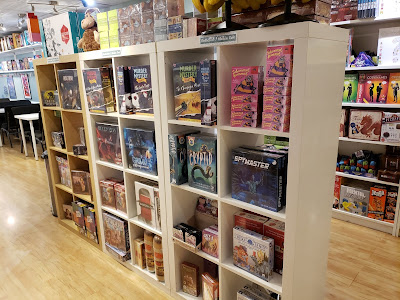 We also have a whole section dedicated to hidden identity and social deduction games that are great for gatherings of all sizes.

The following is a list of games that are great for all sorts of parties and get-togethers and would work great for ringing in the New Year. 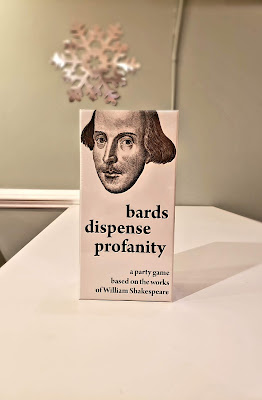 This fun and interesting take on the Cards Against Humanity-style from our 18 and up games uses modern questions and fill-in-the-blank statements but with responses directly quoted from the works of Shakespeare. While it was not necessarily intended to be combined with the base game of Cards Against Humanity, it is a really fun combination. This game is easy-to-learn and great for parties. 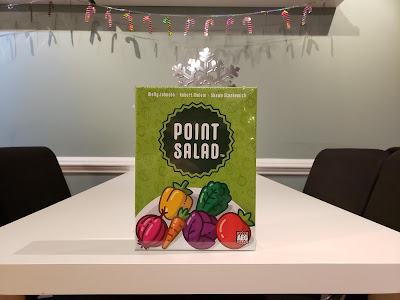 Point Salad is a fun and fast set collection, drafting, and card combination game for 2-6 players looking to stack some veggies this New Year's Eve. The game requires just enough strategy to stay interesting, while providing players with easy-to-jump-into mechanics that make this game a hit. 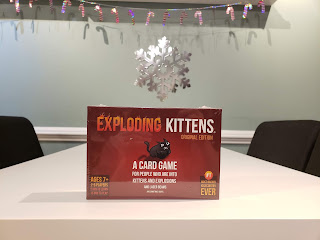 Exploding Kittens is a raucous and hilarious game of hot potato in which 2-5 players attempt to stave off drawing an exploding kitten. They may do so by playing cards that allow them to defuse an exploding kitten, to re-position an exploding kitten inside the deck, or even pass the kitten off to the next player. I have played this game at several parties and always enjoyed it. 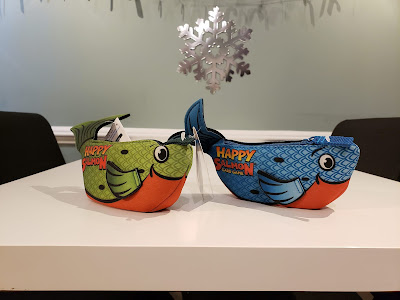 Happy Salmon is a fun and fast game in which 3-6 players (or even up to 12 players with both the green and blue salmons) call out the actions on their cards. If someone else calls out the same action, then both players must perform that action and discard those cards. The first person to discard all of their cards wins. However, there are no turns. Everyone is calling out actions simultaneously and has to listen up for the actions being called if they want to find a match and start discarding. 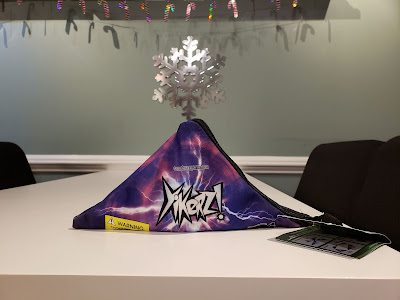 Yikerz! is a fun magnet game in which one or more players receives an equal stack of magnets and has to lay them out on the mats. The first player to put down all their magnets wins, but they have to be careful. If a player puts down a magnet that zaps other magnets onto it, then they have to add all of the collected magnets back to their stack. This fun, push-your-luck game is fantastic and a great game for bringing everyone together. 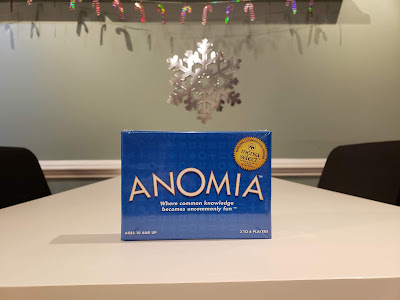 For those who prefer trivia games, Anomia is a go-to classic for 3-6 players. Anomia involves all the random knowledge that is constantly going around our brains. In the game, a player draws and reveals a card. If the card they draw has a symbol matching another player's card, then that player must quickly face-off against the other player, naming a person, place, or thing associated with the card's category. Whoever manages to blurt out a correct answer first wins their opponents card. 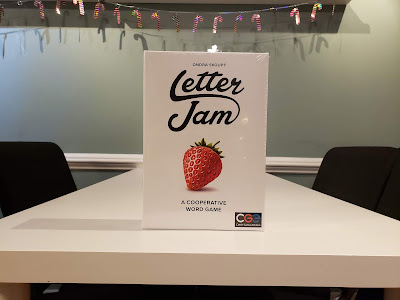 Letter Jam is a co-op word game for 2-6 players in which players receive a set of face down letters. Each player puts a face down letter in front of them on a stand that faces away from their sight. No one should see their own letter. A player's current letter should only be visible to other players. Each turn players work together to form the longest word possible from the visible letter. Whoever comes up with the longest possible word from the letters available becomes the clue-giver and is tasked with assisting the current player. This is a fun, tricky word game that can bring everyone together and is sure to be a blast. We already posted about Letter Jam when it originally came to our store, but I felt it was worth highlighting as a word game of choice for larger gatherings. 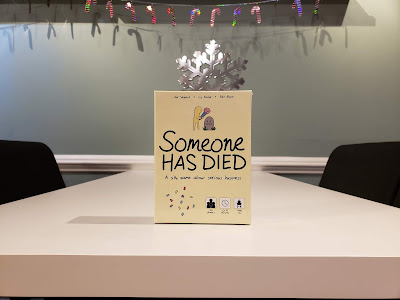 Someone Has Died is both silly and macabre in the best ways possible. In this story-telling game, 3-6 players each vie for their right to someone's stuff post-death. The setting is at a will arbitration and each player receives a few different cards that help them to form their character's backstory, identity, and personality. One player takes the role of Estate Keeper who gets to establish the deceased's background and gets to decided who argues best. This is a good party game for those with a macabre sense of humor. 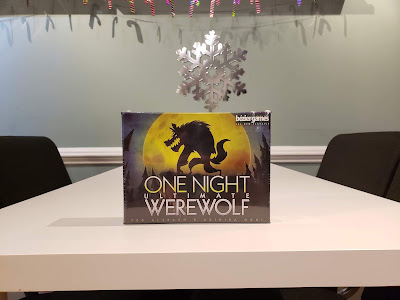 One Night Ultimate Werewolf is a hidden identity and social deduction game that will liven up any party. It's one of my personal favorites for large gatherings and is a great way to ring in the New Year. The game takes place over the course of one night and players must try to suss out who among them are the werewolves. 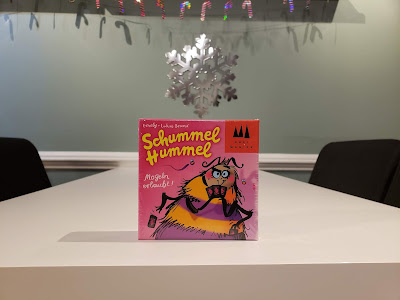 To win Schummel Hummel, you must get rid of your cards before any other player, and unlike in most other games, you can cheat to dump cards from your hand. Toss them over your shoulder, hide them in your shirt! One of the players represents the watchman, though, and if they catch you cheating, then you have to both keep your original card and take one of the watchman's as well, while also taking on the role of the watchman. This game is a great way to enjoy your New Year's celebrations with 3-5 friends.

Great Games for both Kids and Adults

The following are some highlights from our kids' section that are enjoyable for both children and grown-ups alike. 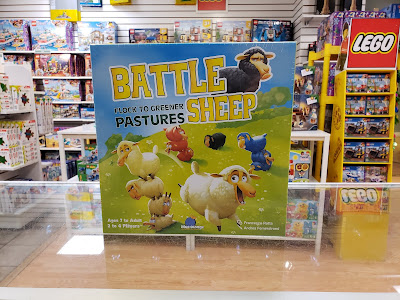 In Battle Sheep (first released as Splits), players from ages 7 and up start the game by constructing the board from identical four-hex tiles, then each player places his/her tall stack of discs on one of the border hexes. Players take turns removing some number of discs from the top of one of their stacks, moving that new stack of discs as far away as it can go in a straight line. Players must leave at least one disc behind when moving, so the board gradually fills up and movement opportunities become more and more scarce. The player occupying the most spaces at the end of the game wins! 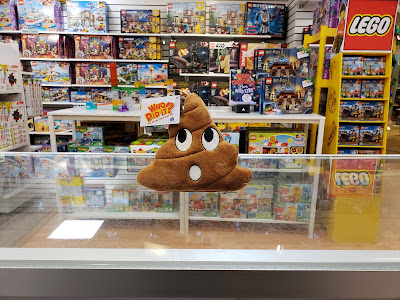 Who Did It? is the ultimate blame game in which 3-6 players attempt to divert blame from their animals onto other animals for who did it. But if a player attempts to blame an animal who has already been absolved then they are caught in a lie and stuck with the blame. This silly party game is perfect for an evening of light-hearted fun, while also being accessible for any kids celebrating the New Year. 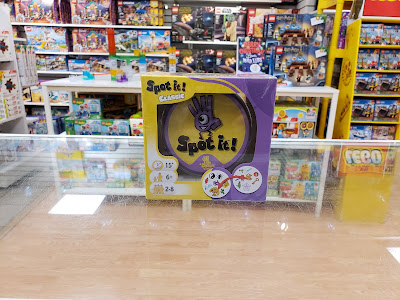 Spot It! is a game of spotting matching symbols between different cards. The game can be played with 2-8 players and is fast, fun, and simple. This is a great family game for New Year's Eve that will keep everyone entertained.

If you're looking for a game to play as the ball drops this year, then come on down and check these titles out or get a personal recommendation from one of our staffers.

Posted by Labyrinth Games at 3:45 PM