Check out what's new to Labyrinth this week!

Fox in the Forest Duet 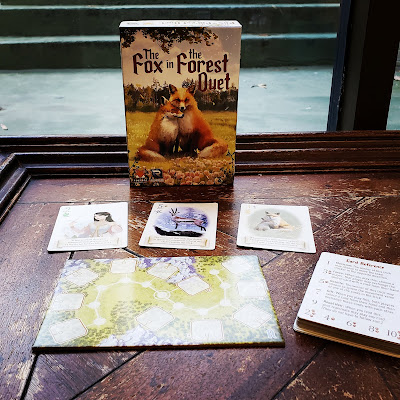 Fox in the Forest Duet is a new cooperative, trick-taking game by Renegade Games in which two players work together to collect all the gems without running out of time or getting lost. Like in many trick-taking games, each round a player will either win or lose the trick, but the result of the tricks played will effect how certain tokens and markers move around the forest. During the round players cannot reveal their cards, they cannot ask revealing questions, and they cannot discuss strategy (i.e., they can't discuss who should win the trick and what suit they are going to play). It is an interesting take on the trick-taking genre and it has a solid fairy tale theme and gorgeous art. 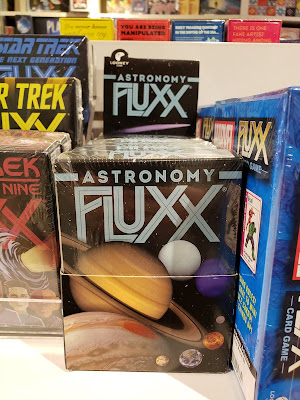 Astronomy Fluxx is now out at Labyrinth. For all you Fluxx enthusiasts and astronomy enthusiasts, this fun, rule-changing game might just be for you. 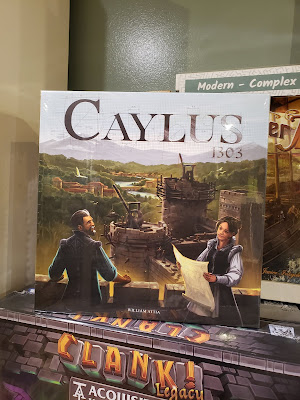 A classic game is back! As one of the first worker placement games, Caylus stands among the true board game classics of the 2000s. The original designers' team, together with the Space Cowboys, have now created a revamped version! The mechanisms of Caylus 1303 have been streamlined and modernized for an intense and shorter game. Don't be fooled, though, as the game has kept both its depth and ease of play while a lot of new features have been added, including: variability of the starting position for a virtual infinity of possibilities; no more pre-set strategies; characters with special abilities, with a wavering loyalty, offer their services to the players; and of course, brand new graphics. The King calls you again, so it's time to go back to Caylus! 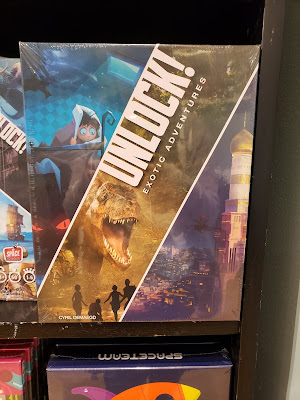 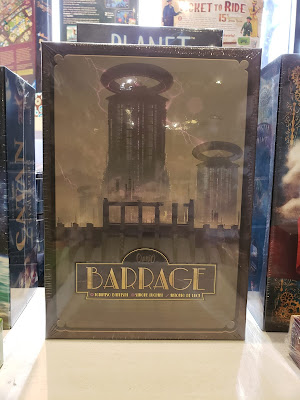 Barrage is an interesting worker placement game for 1-4 players, in which each player takes on the role of a company attempting to provide hydroelectric in a 1920s to 1930s dystopia where fossil fuel usage has been used to its limits. The game involves elements of route-building as well as action drafting. A couple key mechanics that make the game unique are the Construction Wheel, which must be used wisely, as it is where players' available actions are stored, and the shared water represented on the board. Players must compete for control of the water and attempt to intercept the water flow before other players to harness its potential. 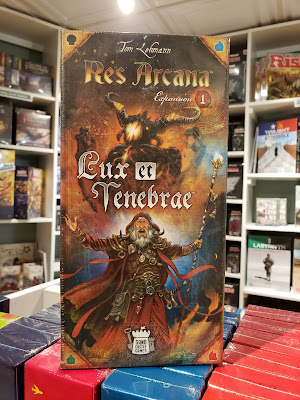 Lord of the Rings: The City of Ulfast 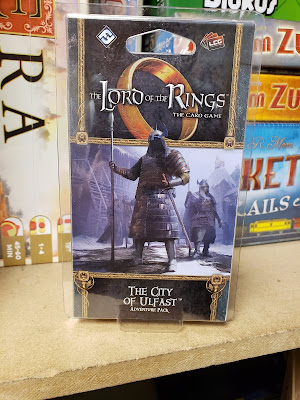 The City of Ulfast is the second Adventure Pack in the Vengeance of Mordor cycle for The Lord of the Rings: The Card Game! This 60 card pack contains an entirely new scenario for players to continue the adventures they started in the A Shadow in the East deluxe expansion and the Wrath and Ruin  Adventure Pack, as well as new cards to help players deal with these challenges.

A Game of Thrones: The Things We Do for Love 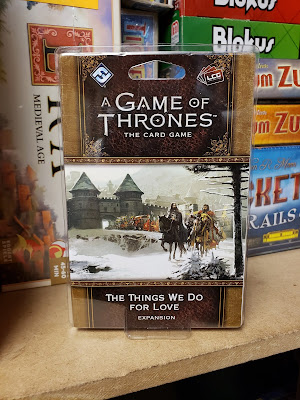 A new age of A Game of Thrones: The Card Game begins with the The Things We Do for Love! This expansion contains 88 cards that draw on the game’s rich history as both a CCG and LCG, bringing powerful and iconic cards from earlier eras of the game’s life to the second edition of the A Game of Thrones LCG. Whether it be the return of iconic characters like Mad King Aerys, or fan-favorite locations and plots, players will find plenty to be excited about.

Arkham Horror: Dark Side of the Moon 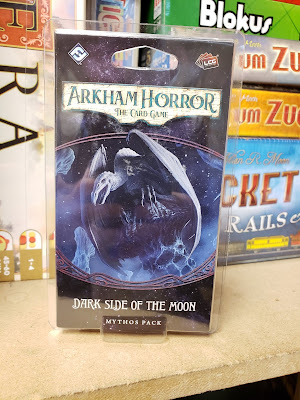 Dark Side of the Moon is Scenario 3–A of The Dream-Quest campaign for Arkham Horror: The Card Game. This scenario can be played on its own in Standalone Mode or combined with the other expansions in The Dream- Eaters cycle to form a larger four or eight-part campaign. 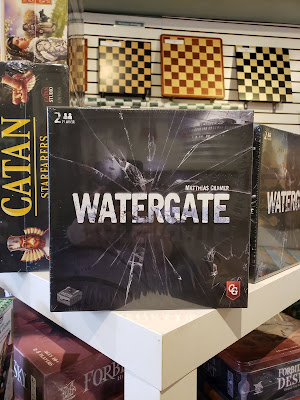 Watergate is finally back! This popular two-player-only game is sure to entertain anyone who enjoys a little history with their gaming. 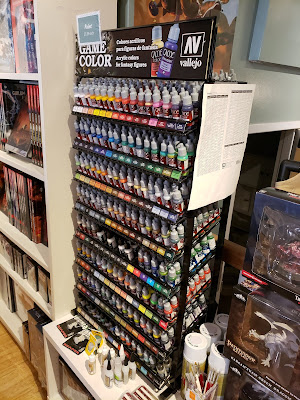 We have received a huge restock of many of our Game Colors and Game Inks, so if you're looking to paint up some of your miniatures, then swing by to check out which colors and effects are now back in stock. 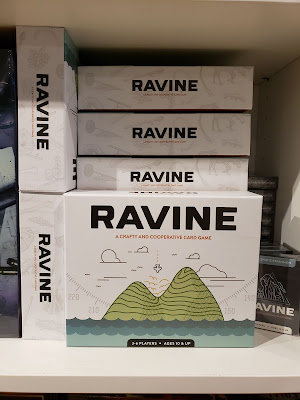 One of my personal favorite cooperative games is back in stock after the holiday rush. If you'd like to know more about Ravine, then swing by and check it out. Several of our staffers really enjoy this one and are happy to talk about it. 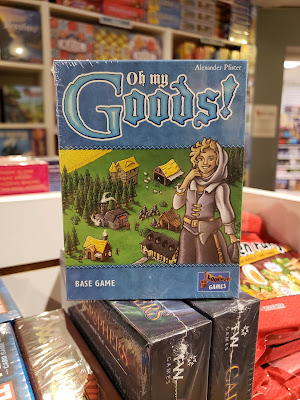 The popular hand-management, economic, card game, Oh My Goods! is back in stock! 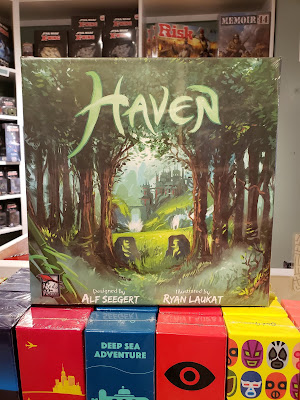 Haven is another beautiful game by Ryan Laukat that is made specifically for the two-player-only genre. While not a new game per se, Haven is now at Labyrinth and we're pretty psyched about it. It is an asymmetrical game that takes around 45 minutes to play. One player takes control of the City's forces, as they seek to invade and conquer the Forest. Meanwhile, the other player takes control of the Forest's inhabitants, attempting to defend their home from the City. 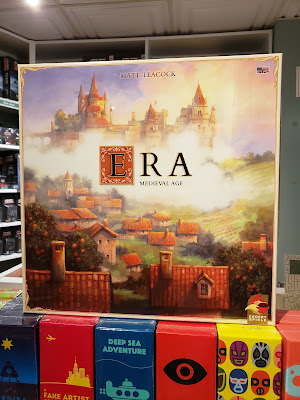 I recently picked up a copy and played Era: Medieval Age with my significant other and found it to be a delightful, well-made dice-pool, roll-and-build game. In the game players are given a starting pool of dice and a privacy screen which they must roll their dice behind. That privacy screen contains a chart with all the building types, their costs, and their grid layout available in front of the player. The screen also contains a list of possible disasters that can take place in the city players are building. When players roll their dice behind the screen, they have two chances to re-roll as many or as few dice as they wish, except for any dice that land on skulls. Skulls cannot be rerolled and will result in a disaster at a later point in the round; however, skulls can either result in disaster for the player's own board or, depending on the number of skulls, for their opponent's board, so skulls can be used strategically. Players use a grid board with peg holes to build their cityscape and keep track of resources as well as negative points resulting from skulls. The game also actually took 45 minutes, as advertised. My significant other and I had a blast playing with these beautiful pieces, tetrising them into place and trying to score as many points as possible by fully enclosing our city. Matt Leacock (the game's creator) has made other really good games as well. Other titles Leacock is known for are Space Escape (another favorite of mine) and the hugely popular, Pandemic. 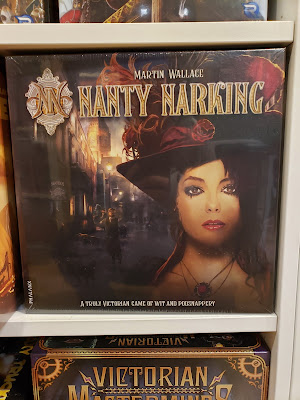 Nanty Narking is another game I recently added to my collection, as it is a reprint and retheme of a game I have wanted for forever. The original theme of the game was Terry Pratchett's Discworld: Ankh Morpork. While they lost the IP rights for that version of the game, they reprinted it with a new theme that is equally fun. Nanty Narking is a game in which players are randomly dealt an identity with a specific victory condition. The identities are all characters from the works of Sir Arthur Conan Doyle and Charles Dickens, and players are given a chart that lets them know what the victory conditions for every possible character are, so that part of the game is trying to figure out your opponent's identity in order to better thwart their plans while advancing your own. Nanty Narking's mechanics are very simple in that players, on their turn, play down a card of their choice from their hand. Each card may contain various symbols that allow players to place new agents in the city, assassinate enemy agents, gain money, build a building, or even play a second card. In my first play through with my significant other, I was Lord Bellinger and he was Moriarty. Suffice it to say that Moriarty got away with his evil plans, but we both had a blast playing so it was overall a great experience. This is a game by Martin Wallace, who is also known for his work on the Brass series.

Posted by Labyrinth Games at 1:48 PM