A Beginner's Guide to Magic the Gathering and MTG Arena

Magic: The Gathering – How-To-Play and Magic Arena
by Alex

Welcome Magic Players and Magic Learners! These pages are intended to be an introduction and a jumping off point for learning more about the mechanics of Magic and the basics of using Magic Arena. But first of all; Welcome to the worlds of Magic: The Gathering! You play as a Planeswalker, a powerful wizard who travels to the infinite planes of the Multiverse, a vast variety of worlds just waiting for you to tap into their pools of mana, creatures, and powerful spells. No matter how you want to play Magic, there is most assuredly a deck that is right for you. It can seem a little daunting at first, but the more you play and practice at the game, the better you will be able to make sense of how all the cards work together. Remember: reading the card explains the card! Creatures not only attack and defend you from attacks, but can also have a wide variety of abilities. Always make sure that you know how the cards that you play affect the game. We’ve broken this guide into several parts; starting with a little bit of color philosophy and what it means to play that color in the game, followed by the different card types, and so on. If you have any questions about Magic in any capacity, please ask us on Labyrinth’s Facebook page or @LabyrinthDC on our Discord page; our team and our Magic Judges will be more than happy to assist you in your magical endeavors.

Part Four: How to Read a Card 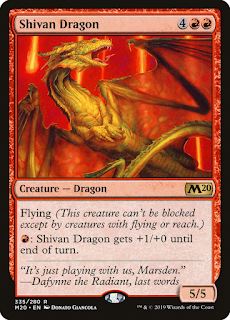 Rules Text: Flying (This creature can’t be blocked except by creatures with flying or reach.) Activated Ability - Pay one Red Mana: Shivan Dragon gets +1/+0 until end of turn.

Part Five: Anatomy of a Game and Turn Sequence Expanded

Magic Arena is an official online version of Magic: The Gathering, developed by Wizards of the Coast. It has been used as the premier medium for professional level tournaments as well as everyday casual play. Primarily focused on the Standard and Brawl formats, Magic Arena has a multitude of ways to play in different limited and constructed tournaments, as well as free play and ranked play.
To use Magic Arena, one must first download the program from the Wizards website and then install it on your preferred computer. Once logged in, you will need to create an account with Wizards; at this time you can also input payment information if you intend to buy packs of cards in the Arena program. A word of advice: you do not have to pay anything for Magic Arena, but you will be limited to starter decks and what card rewards you can achieve at first until you can unlock more packs and build a greater variety of decks. Don’t be discouraged! The game will reward you for playing more and different decks, giving you coins that you can trade in for packs to get new and more powerful cards.

Once you find an archetype or a couple of cards that you really like, spend some time getting to know what the cards can do and what their limitations are. Playing more and more with your preferred deck is the best way to get better at the game as a whole. If you know exactly what your cards do and when and how to cast them, you already have a leg up. It can be frustrating when you are just starting out and do not have all the cards that you want for a specific deck; take your time and practice with the cards that you do have. Building confidence and experience with the cards you do have and with the Arena program as a whole will serve you well when you can finally upgrade your favorite deck into something that is closer to competitive.

Posted by Labyrinth Games at 9:33 AM