Nerding Out Over Horror and Science Fiction
by Hannah

Today's post is near to my heart, as a huge fan of horror and science fiction games, and for some of it I have actually decided to pull from a research project for a class I took last summer on New Media Studies. What is interesting to me is that even though the mediums that host these genres differ so widely from one another, they still manage to capture my imagination every time. In my opinion, some of the best horror and science fiction board games include Betrayal at House on the Hill, Nemesis, and The Others 7 Sins. However, don't forget the RPGs that also masterfully incorporate genre, such as Mothership, Dread, and Disciples of Bone and Shadow. Part of what I think fascinates and attracts us to these games is the air of mystery that permeates every layer of the experience of playing them, but what is so attractive about the mysterious insofar as it relates to horror and science fiction? 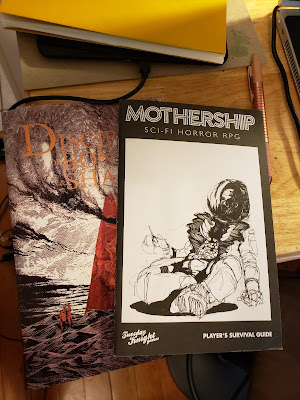 When we consider the way that media pervades our lives in varying forms, it becomes easier to understand our changing relationship to genre as well. "In its own way media has become the immanent—a physical manifestation of the divine. For instance, in Black Mirror’s “Nosedive,” the [cell] phone becomes a tool of moral judgement and maintaining socioeconomic status. Lacie, the protagonist, is constantly holding her phone, as are most other characters in the episode, and it becomes apparent that the phone app everyone uses has a higher authority than any individual and may mete out judgement for behavior that it does not deem acceptable. The phone app and, by extension, the phone has then become an ideological apparatus, maintaining the status quo at all costs. The significance of technology as extensions of man and as holy artifacts is important to keep in mind when discussing how these ideas relate to the genre of horror.

The development of horror as a word also offers some interesting points of discussion in terms of how new media relates to the aesthetic of the horror genre in the modern era. When one considers how horror originates as a noun encompassing the action of hairs standing on end, it is interesting how the word has been displaced to describe that object which inspires the fear response in the first place. (“The Hirsute History of 'Horror'”)

If one were to take an imaginative leap, it might be plausible that the experience of the fear response is intense enough that it was necessary to give its cause (i.e. a potentially ineffable thing) a suitable name, but more likely this is simply the result of natural shifts in meaning and usage. Regardless, it is an interesting thread to follow. The etymological origin of horror branches off to form another word in abhor, the prefix of which, “ab,” means “away from”—to tremble or shudder away from something (Cresswell, 1). Ineffable and abhor are important words to keep in mind moving forward.

The next leap to be made then links ideas of horror through the ages and Rudolf Otto’s The Idea of the Holy. In his seminal work Otto introduces an important vocabulary for discussing ideas of the holy and immanence. In particular he is interested in divorcing what is at the core of the term Holy (i.e., its moral and philosophical implications) from the actual thing in and of itself. In reference to that unnamable something, Otto writes, 'There is no religion in which it does not live as the real inner most core, and without it no religion would be worthy of the name' (loc. 327).

There is significance in divorcing the ineffable something behind the Holy from the word holy itself, which has myriad ethical and moral implications, especially in regards to horror and science fiction. Horror and science fiction have progressively more and more crossover, so that in order to discuss science fiction one must usually discuss it as a subset of horror or vice versa. The most significant link between science fiction and horror as intertwined traditions is the experience of the sublime. ...[T]he Gothic novel [, the influence of which is felt to this day in both genres,] and the tropes it produced are linked with the aesthetic values of the Romantic movement in literature in a significant way. The experience of the sublime is significant to Otto’s work, which helps to illuminate a definitional understanding of the stages of the sublime experience.


In The Idea of the Holy Otto introduces terms central to discussing the significance of horror and science fiction in the collective intelligence of society. These terms include numinous, mysterium tremendum, and fascinans. Particularly the experience of the mysterium tremendum is important to the fascination society has with monsters and aliens—or with simultaneous fear and awe. Otto writes that the experience of the mysterium tremendum may be a '…sudden eruption up from the depths of the soul with spasms and convulsions, or [that it might] lead to the strangest excitements, to intoxicated frenzy, to transport, and to ecstasy. It has its wild and demonic forms and can sink to an almost grisly horror and shuddering'(loc. 434).

The experience of the sublime is a more artistic and philosophical form of the mysterium tremendum experience but shares many of the same principles. A perfect example in cinema of a film that captures the heart of the mysterium tremendum would be 2001: A Space Odyssey. The obelisk, around which all of the scientists and researchers gather, acts as a manifestation of the numinous (i.e., that great something that exists at the core of the Holy), and it acts simultaneously as a force of complete and total autoamputation in the Mcluhanian sense. It is without history or creed and yet humans are both drawn toward it and repulsed by it—exquisite disgust." (Hannah Trammell)

When we get a shudder down our spine as we flip over the next room tile in Betrayal or when the Jenga tower trembles just a little too much in Dread, we also must realize that that shudder is part of why we played these games in the first place. Fear or anxiety does not always have to be unpleasant--it can be exciting or it can bring us closer to the experience of something truly alien or unknowable. One of my favorite book-to-movie adaptations is Annhilation. While so much of the plot differs between the book and movie, the movie does maintain the philosophical impetus that drives the book forward. It is a meditation on human experience in the face of the utterly unknowable. In their small, sometimes less intense ways, board games make us feel this too and sometimes even more so because of their physicality. The construction of each of the aforementioned games is so wholly different that each experience is different. Perhaps, we love these games and these genres so much because they offer a safe entrance into an otherwise unapproachable experience.

Otto, Rudolf. The idea of the holy : an inquiry into the non-rational factor in the idea of the divine and its relation to the rational . London : H. Milford, Oxford University Press. Kindle Edition.

Trammell, Hannah. "New Media and the Genres of Science Fiction and Horror in Film and Television." Unpublished.

Posted by Labyrinth Games at 12:54 PM