A Brief Review of the New Ikoria Commander Decks

There are five amazing new Commander decks, including Symbiotic Swarm, Enhanced Evolution, Arcane Maelstrom, Ruthless Regiment, and Timeless Wisdom. Each of these unique decks comes ready-to-play out of the box and each contains several commander options. 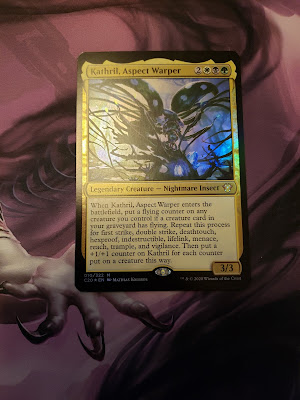 This deck's main commander is Kathril, Aspect Warper, who makes certain that the dead may never die with her ability to add myriad types of counters from creatures in your graveyard to creatures you currently have on the battlefield. The majority of creatures here have some sort of synergy with the graveyard, whether it is gaining more counters based on what's in the graveyard or, in the case of Nyx Weaver, putting (hopefully) creature cards direct from your library into the graveyard (a pretty powerful ability in this deck). The base deck also comes with several rare and uncommon lands that have sacrifice outlets or the ability to stack more counters. A few cards you may consider adding to the deck are Fiend Artisan, Nethroi, Apex of Death, and The Ozolith. They all have synergies with Symbiotic Swarm's overall goals. For anyone looking to continually beef up creatures using their dead brethren as fodder, and potentially getting to swing with your flying commander with menace or double strike for either a ton of potential commander damage or to thin your opponent's board state, then this is a good deck for you. 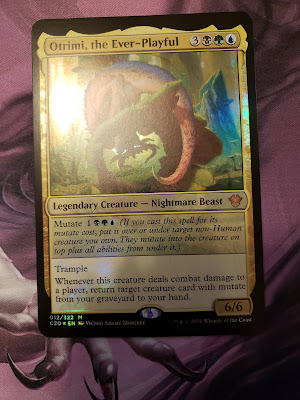 Otrimi, the Ever-Playful is all about mutations, mutations, mutations! In my first game with the new commander decks, I lost within the first few turns of the game to a massively mutated Otrimi who dealt exactly enough commander damage to me to finish my Symbiotic Swarm off perfectly. There are several creatures along with Otrimi that can mutate and even more creatures for those mutants to mutate onto, so that suddenly Otrimi has hexproof or lifelink as well as being a natural trampler. The deck also comes with a balance of removal with which to potentially protect your huge mutations from opponents. Some suggestions for card additions to this deck include: Brokkos, Apex of Forever, Sea-Dasher Octopus, and Vivien, Monster's Advocate. The concentration of creature power is narrow but overwhelming. If you are interested in playing around with the newest mechanic, while also returning your beautiful monsters from the grave, then this might be your deck. 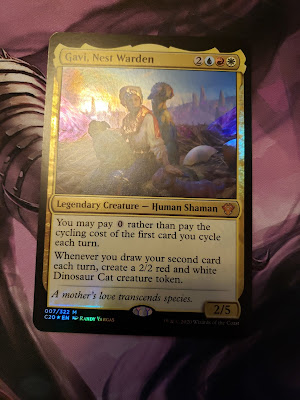 Timeless Wisdom is a super interesting cycling-based deck that revolves around Gavi, Nest Warden (aka Mother of Cat Dinosaurs), who allows you to cycle your first cycle card each turn for free when she is on the battlefield, creating tokens for whenever you draw a second card for turn. Whoa! I get so excited thinking about all of those cool little cat dinosaurs. They are adorably ferocious. A few cards you may consider adding to this deck are Shark Typhoon, Unpredictable Cyclone, and Lukka, Coppercoat Outcast. If you want an experience where you get to cycle into your perfect hand while creating a cat dinosaur army buffed by some really tangentially powerful creatures like Ethereal Forager, then this deck may well be for you. 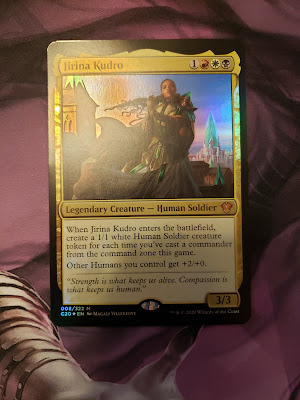 Jirina Kudro is an aggressive and human tribal commander, whose ability rewards you casting her from the command zone. The whole deck is human tribal and is built around buffing and creating humans that aggressively dive into the fray. The deck reminds me of my Mardu vampires deck in a lot of ways, and it definitely has an aristocrats sub-theme to it as well, especially through the optional partner commanders. Some cards you may consider adding to this deck include Judith, the Scourge Diva, General Kudro of Drannith, and Winota, Joiner of Forces. If you're into trying to beat out opponents as quickly and aggressively as possible, while building a board state to last you the late game, then this is a good choice. 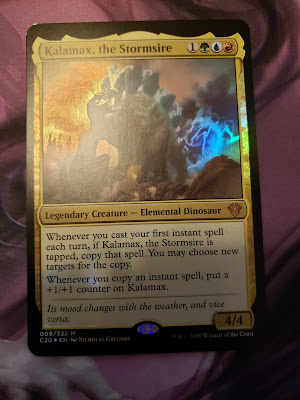 Arcane Maelstrom has a heavy focus on assisting players in getting to the spells they need and letting them copy those spells for really powerful turns of removal, damage, or token creation. Also, every time you get to copy an instant, Kalamax gets bigger, and a base 4/4 is nothing to sneeze at as it is. All the creatures in this deck are tuned to helping you get your most powerful instants copied or retrieved. So whether you're forcing multiple opponents to destroy their board states or burning an opponent for 8 damage instantly, this deck has a lot of really powerful potential. A couple cards you might add are Chandra's Regulator and Chandra, the Firebrand. If you love playing spell heavy strategies that all lead to one giant creature finishing opponents off, then this deck is probably for you.

All the decks discussed here can be bought at this address: https://store.labyrinthgameshop.com/mtg-c20-commander-decks.html .

Check out all the new Ikoria goodies at our Webstore...

Posted by Labyrinth Games at 6:37 PM