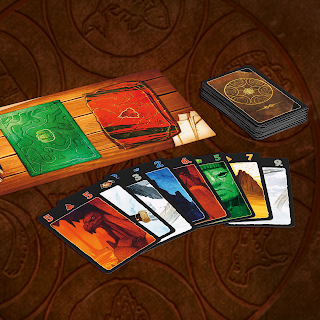 When we decided we wanted to include a Valentine’s Day article in February’s newsletter featuring the staff’s favorite two-player games, I began to think: “What IS my favorite two player game?” I always struggle with the “favorite game” question. I love so many games. I have too many favorites. I frequently play with just one other person. Usually it’s my son, but also frequently my husband or a friend.

I also thought maybe the Valentine’s Day article should focus on our top selling 2-player games. Those include Magic: the Gathering, Pokémon, Codenames Duet, Watergate (which was my top pick for the holidays), 7 Wonders Duel, Patchwork, The Fox in the Forest Duet, Jaipur, and last December, somewhat unusually (thanks to an extremely popular Netflix show) chess. But then there are also the 2+ player games that we love for just two players. These feel like they are in a different category from games that are specifically designed for just 2. Carcassonne, Azul, Qwirkle, Scrabble, The Game, Wingspan, Sprawlopolis, Pandemic, Abandon All Artichokes, Bandido, Villainous, Splendor are all games that I’ve recently been loving to play with just 2. How will I ever decide?

So, I decided to ask our Facebook followers. They gave so many great recommendations. Check out the post and thread here: https://www.facebook.com/labyrinthgameshop/posts/3933737913312518

I was still completely undecided, until I asked my husband. My husband has low vision which severely limits the games he can play easily. He doesn’t usually enjoy board games because he can’t see the board. Mostly we play card games. I asked him what his favorite game to play with just me was.

His answer: Lost Cities! We’ve played this game together for years (it was originally published in 1999), and it is still the one we play most often. I remember our first game. I had played before which gave me an advantage, so he lost badly. Later that night while I was soundly asleep, I felt him poking my shoulder. When I asked what he wanted, he said, “I figured out what I did wrong in that game. You’ll never win again.” Seriously, my husband woke me up at 3am to trash talk me. Ah, love – it’s a beautiful thing. It must be love because he’s still alive, and after many years, we still have a very fierce rivalry over Lost Cities. Now he does win some, but we are evenly matched, and the win/loss ratio is close enough to keep things interesting and the trash talk lively.

Lost Cities is a card game in the Kosmos 2-player series. It was designed by Reiner Knizia, one of the world's most prolific game designers and a Labyrinth staff favorite. Dr. Knizia has a PhD in mathematics and the mechanics of his games usually explore various mathematical ideas in interesting ways. Lost Cities plays in about 15 to 20 minutes, but we usually play several games back-to-back keeping score to see who the overall winner will be. Sometimes we keep scores going for months. In Lost Cities, you have a hand of 8 cards. In the original version of the game, there were 5 colored suits numbered 2 to 10 that represent different archeological expeditions. The newest version has an extra color, with this 6th suit being optional for game play. Using the 6th suit changes the tempo of the game and makes it a bit longer. We enjoy playing both ways. There are also 3 “investment” (or “handshake”) cards for each suit. On your turn you must play a card first. You can either play it on your side of the board to invest in an expedition or discard it to the center of the playing area. If you discard it, it will be available to be picked up by the other player at the end of their next turn. You do not want to give the other player anything they can use. Points are very tight. Investing in an expedition (playing cards on our side) costs you money (points) though. As soon as you play a card in any suit, that costs you 20 points. So, if I play a red 2 on my side of the board, I now have -18 points in red. I need to play enough red cards of continuously increasing values before the end of the game to make each expedition profitable (having a positive point value). If I next play a red 5, then I will never be able to play the 3 or the 4, but I may not be able to discard them either since my opponent might want to invest in red later in the game. With the 5 played, I now have -13 points in red. One way to gain many points is by using the investment cards. These are point multipliers, but they must be played into an expedition first, before any other card in that suit is played. Sometimes, you may only have a couple cards in the suit. Do you want to take the enormous risk that you will get more cards in that suit at the right time to play them and make sure that suit isn’t negative? You can also gain 20 bonus points if you can manage to get 8 cards played in a suit – 2 investment cards followed by a 2, 4, 5, 7, 9 and 10 would be worth 71 points ((-20+2+4+5+7+9+10)*3)+20. You initial investment is -20. You multiply the total sum of all cards played by 2 for 1 investment card, 3 for 2 investment cards, and 4 for 3 investment cards. You earn +20 for having 8 cards in the suit.

After playing your card, you get to draw a card – either from one of the discard piles (each suit has its own discard pile) or from the deck. You play the game until the last card of the deck is drawn, and the game ends immediately as soon as it is drawn. Playing first and THEN drawing and the game ending are my two favorite parts of this game. It requires excellent hand management and fantastic card counting abilities. Figuring our probabilities and risk assessment are also key. You get into some very tight situations where you don’t want to play anything because you are trying to wait for a lower valued card, but you also can’t discard anything without helping your opponent. If you think a little math-y competition with your significant other sounds good, this might just be a great gift this Valentine’s day. We all need to spend more time together playing.

Posted by Labyrinth Games at 6:00 PM No comments: