by Becky "Ready My Airship!" Topol

We’re all crazy excited about Kings of Air and Steam. A pick-up-and-deliver game in a brightly-colored, cartoony steampunk world, Kings of Air and Steam challenges players to use their airships to deliver goods to rail depots, where trains can haul them to the wealthy cities, all for your profit. When I say “airships”, I feel the need to emphasize that the pieces are fiercely adorable zeppelin stand-ups in a rainbow of colors, and I am in love with them. Despite being awesome, the zeppelins are forbidden to land in the cities, so players have to use clever planning to come up with a series of cargo drops and movements to get their payload from the factories to the rich captains of industry in the cities. Players secretly decide all their actions at the beginning of the turn - movement or upgrades to airships and trains, building depots, begging for a loan, etc - and then all reveal their first move simultaneously. Turn order and character specifications determine who will actually move first on each action card. The board is modular, and its size changes with the number of players. Cities (including Geekopolis!) can be in a different arrangement from game to game, which means greater variety and replayability. Kings of Air and Steam is a gorgeous game that we can’t wait to take for a spin!

Via Appia is another new board game this week. You play as Roman senators, attempting to be the first to get from Rome to Brindisium. Of course, there’s no road from Rome to Brindisium yet, so you’re going to have to build it as you go. Essentially a tile-laying game, Via Appia is rife with difficult decisions; doing something that may help you in the moment may also give your opponent a big advantage in a later turn, but the quarry mechanic means that things are always changing in a very visible way. The quarry is what I’m most excited about in this one. If you’re building a road, you need the stones to come from somewhere, and Via Appia does this by including a device like an arcade’s coin-pusher game. You place stones in the back of the quarry pusher, and slowly press them forward with a wooden arm in the hope that a bigger, more valuable stone will slide forward off the edge. Players use the stones they collect this way to add to the road, visit different cities along the way, and earn money. With this totally unique mechanic and so many different choices on each turn, Via Appia promises to be an exciting challenge.

For the card gamers among us, Archaeology: The Card Game is a set-collection game that we've just begun to carry due to the large number of requests for it. Taking the role of archaeologists, players attempt to buy and sell various artifacts ranging from lowly papyrus scraps to the highly valuable pharaoh’s mask. Larger sets of the same item are worth more points when sold to the museum, but you can’t keep a set in your hand too long: Sandstorm cards will force you to get rid of half your hand, and Thief cards allow players to steal cards from each other. This constant threat keeps tension high, and forces quick, sometimes painful, decision-making (if I’d held out on selling those talismans for just ONE MORE TURN I’d have had the whole set! Argh!). Archaeology is a relatively quick, easy to pick up, and super-engaging game for two to four players.

With summer getting into full swing, it’s the perfect time for more-portable versions of classic games like Battleship. Whether you’re heading out to an afternoon at the park or a week at the beach, you might want to pack the new Battleship: Card Game or Battleship: Fun on the Run, a new miniature version of the classic peg game. For more fun on the road, we’ve added Summer Fun Mad Libs to our growing collection of old-school write-in books. Letters from Camp Mad Libs are perfect for kids heading off to summer camp, or anyone who likes sending silly mail to friends. Each page is a fill-in-the-blanks letter, ready to be torn out, sealed with a sticker, stamped, and mailed!

And if you do want to bring your games on a trip, we’re now carrying Rubber Box Bands - specially-designed elastic bands in various sizes meant to keep game boxes closed tight. They’re a great addition to any game collection (even one that stays home) to keep rulesheets, cards, and parts in their boxes. I know I’d be heartbroken if a zeppelin got lost...
Posted by Labyrinth Games at 8:01 AM No comments: 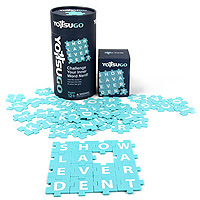 Posted by Labyrinth Games at 12:53 PM No comments:

Sink Your Teeth into Morels

Morels is a mushroom-themed, two-player, card-based strategy game by Two Lanterns Games. Players can take one of several actions on their turn. They can take cards into their hand, either a single card from from the card row or all of up to 4 cards in the Decay (the area for cards that go too long without getting picked). Players can also cook or sell mushrooms they have collected for victory points or walking sticks respectively. Lastly, players can play Frying Pans out of their hands to use in the cooking process. 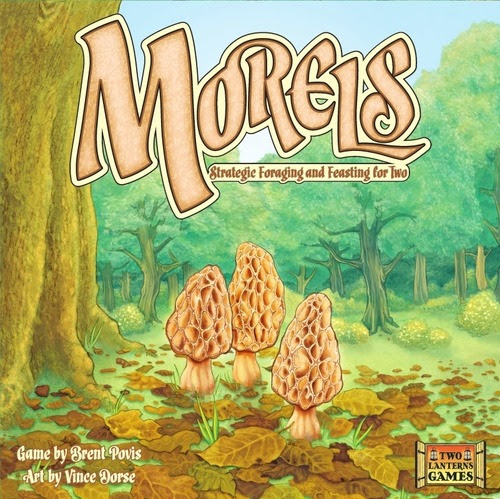 There are several different types of cards: Mushrooms, Frying Pans, Baskets, Moons, Butter, and Cider. Most of the different Mushrooms have a sale price in sticks and a cooking amount for points, except for the Destroying Angel, which reduces a player’s hand size for several turns. Frying Pans are required to cook mushrooms. Baskets increase a player’s hand size. Moons get a player an extra special double mushroom card. Butter and Cider get a player extra points for cooking, provided the player cooks a large enough group of mushrooms at once.


We found that the hand size mechanic was integral to gameplay; the stringent hand size affected our decision-making process more than any other mechanic in the game. As such, there was never enough incentive to take Destroying Angels, even if one could get a few good Mushrooms with them, since the mushrooms we wanted never got to the Decay.


Players use the walking sticks they acquire through selling mushrooms to take cards from the far end of the card row, which they could not usually take. Although selling mushrooms can really open up a player’s options during the game, we found that a single good sale of mushrooms could give a player enough sticks for the entire game.


Morels has a very similar feel to Jaipur, while borrowing the card row mechanic that Copycat steals from Through the Ages. It’s very strategy-oriented because players can always get exactly the card they need, provided they have hand space to wait and sticks to grab the cards in a pinch. I highly recommend Morels, not only for the casual gamer interested in more strategy, but also for veteran board gamers looking for something quick.

Posted by Labyrinth Games at 3:08 PM No comments: