This is the third article in our series on learning through non-electronic games. Our first article covered cooperative games, and our second article focused on games that promote fine motor skills. The idea behind this series of articles is to explain some of the concepts that we address during our educational outreach efforts, like after-school game clubs, as well as provide our readers with the names of some great games and puzzles.

At Labyrinth we love to encourage the use of games to support classroom lessons, whether they are played during class to introduce or reinforce a concept, or played at home for more practice. Our Teacher Wish List program has made games available to hundreds of students in D.C., and we have even held professional development sessions to show local teachers how they can use games in their lesson plans. To make sure that we match teachers and parents with appropriate educational games, we use the Common Core State Standards, which have been adopted by forty-five states as well as the District of Columbia as the standard for academic success. 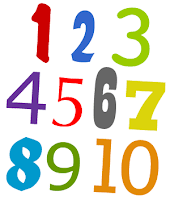 For kindergarten math instruction, the Common Core focuses mainly on “representing and comparing whole numbers, initially with sets of objects” and “describing shapes and space.” In further detail, kindergarten lessons include learning to count from 1 to 100; understanding the connection between number names, digits, and groups of objects; identifying numbers as larger or smaller than other numbers; naming simple shapes; using prepositions to describe spatial relations; and combining shapes to form new shapes. 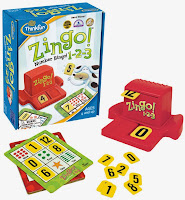 Zingo 1-2-3 is a great game for kids who are just learning to count objects. The Zingo family of games are bingo variants that focus on different areas of elementary education; Zingo 1-2-3 is the math version. The boards for this game have two sides; one side shows groups of symbols and the matching spelled out number, the other side has simple addition equations using symbols. Players match chips with digits printed on them to the correct square. Presenting the numbers in so many ways help children become familiar with the connection between numbers' representations and practical meaning. 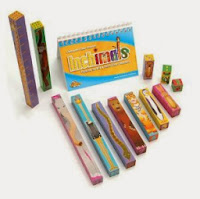 Inchimals is another useful tool for recognizing numbers in different forms. This math puzzle consists of a dozen different animals painted on wooden blocks ranging in length from 1 to 12 inches. Each block has marks showing inches along the side, a matching number digit on one end, and a dice-like arrangement of dots on the other end. The set also comes with a book of simple equations where animal pictures are used instead of numbers. Addition becomes easy to understand when children see that a one-inch ladybug and a two-inch frog stack as tall as a three-inch mouse. 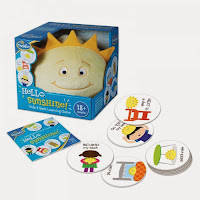 Learning prepositions may sound like a lesson more suited to language than math, but geometry, graphing, and more advanced math rely on a solid understanding of direction and description. Hello Sunshine! teaches prepositions within a game of hide and seek. The game comes with an amazingly soft stuffed toy and a deck of cards depicting places to hide it. This game is designed for children as young as 18 months, and includes adaptations to play with children at different levels of development. 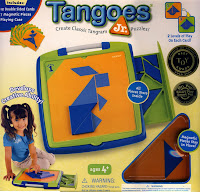 Another geometry skill kindergartners work on is composing shapes, for example, combining two triangles to form a rectangle. A great tool to teach this skill is tangrams; a set of flat wooden or plastic shapes along with cards depicting silhouettes of more complex shapes to be formed using the simple pieces. Tangoes Jr. is a tangram set specifically designed for younger children. It has large pieces that are easier to pick up, and simple puzzles to ease beginners into understanding how the pieces can be combined.

Other early math games that we love include: