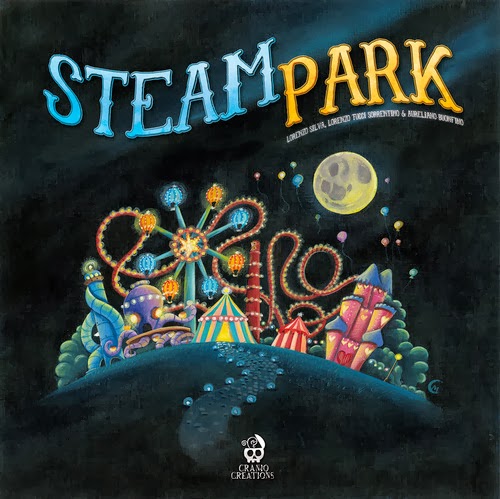 Steam Park takes place in the coal-powered world of Roboburg, where the robot denizens are looking forward to visiting your amusement park! This management game features a mix of luck, careful planning, and frenzied dice-rolling that you hope will result in the symbols you need before your opponents get theirs. You try to build the best amusement park - meaning the one where patrons are willing to spend the most money - while also keeping the area clean and making sure you have enough room to build the right rides and attractions. The dice determine what actions you can take on a turn. Like in Escape, you can pick up dice and re-roll them until you get what you want, but in this case turn order is determined by how fast you finish rolling, and going earlier gives you and your park a big advantage. A fun, medium/lightweight game, Steam Park is packed with sturdy cardboard pieces featuring creepy-cute art in gorgeous pastels. The game also contains two sets of rules; one intended for beginner gamers, and another for more advanced board game fans. So come one, come all! Ladies, gentlemen, children, and robots of all ages! Test your luck and savvy in Steam Park!

True Colors is the latest data pack for the popular two-player card game of Android: Netrunner, and the fourth in the Spin Cycle. The pack brings in 60 new cards, adding in new layers of deception and bluffing. If you want to be successful as a Runner or Corp in Netrunner, you must balance three worlds: the physical, the virtual, and the world of public perception. True Colors brings cybercrime more fully into the public eye than ever before. 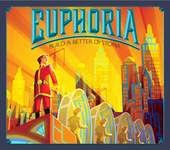 Euphoria: Build a Better Dystopia has been in the store a few times since Christmas, but never for long enough to make it onto the blog! But fear not, it’s here again, and you can take the helm of your very own dystopian future. Falling somewhere between hyper-stimulated future of Brave New World and the constantly-surveilled vision of 1984, Euphoria posits a world where you manipulate your workers by using a combination of drugs, intimidation, and information control. Dice act as workers, and can be placed in various zones to complete different tasks. All this labor leads to money and resources with which you can buy new and better goods and artifacts. Of course, you can also benefit from the labor of your unwitting opponents if you play your cards right. With dice-rolling, hand management, and area control, this is a game for people who enjoy complexity. Euphoria is packed full of bits and pieces to facilitate its many interesting mechanics, and is a great option for players who enjoy complex games like Agricola and Le Havre.  What - and who - are you willing to sacrifice in order to achieve Euphoria?

Breakin’ Atmo is an expansion pack for Firefly: The Game, featuring 50 brand-new cards. With 25 new Jobs in the exciting world of crimes like sabotage and thievery, you and your crew will have great new options to misbehave and get paid for it. The 25 Supply Cards allow your crewmates to gear up with shiny new doodads like a gentleman’s dueling sword, digital encyclopedias, and vehicle mounted blasters. Load up your new duds, and set out to find new jobs to keep you flying through the universe of Firefly: The Game. 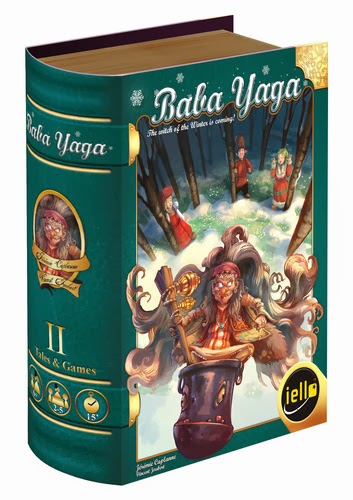 Baba Yaga is the second in the “Tales and Games” series, following the clever dice-roller The Three Little Pigs. Baba Yaga is a fearsome witch-like character from Slavic folklore. She is said to live in a hut that stands on giant chicken legs, and fly around in a giant cauldron. In this game, players take the part of people who have managed to escape the clutches of Baba Yaga, and must make their way out of the forest to safety. In order to escape, you must search the forest for ingredients to three spells, all while Baba Yaga is hot on your trail. With a mix of speed, dexterity, and attention, players must flip over tiles in the hope of finding the ingredients on their spell card while Baba Yaga stalks along her forest path. While one player searches for ingredients, another must take the part of Baba Yaga, and decide whether they should move quickly to endanger the other player, or move more slowly so they can try to memorize ingredient locations. With large, solid cardboard tiles and a Baba Yaga piece shaped like a classic Russian nesting doll, or matryoshka, Baba Yaga is a quick game for two to six players who think they’re fast enough to escape the ogress of the forest! 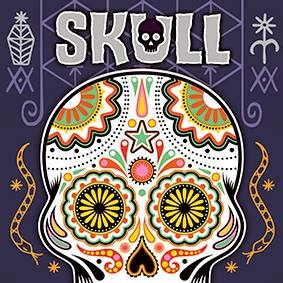 Skull is an updated version of the bluffing game known as Skulls & Roses. The biker tattoo-style art is gone, replaced by a mix of Día de los Muertos sugar skulls and various styles of tribal art. It’s an unusual mix, but the effect is stunning. Each player chooses one color, or “tribe", with four discs each. Three discs for each tribe feature a beautifully-rendered flower, while the fourth has a skull. Players take turns placing these discs face down in front of them, until one player issues a challenge. The challenger must then flip over a number of tiles, hoping that they will not reveal a skull. If the player finds only flowers, they win the challenge, but if they reveal a skull, they fail and lose a playing disc. It only takes two successful challenges to win, but you never know when your luck may run out. Firmly rooted in analyzing other players’ behavior and keeping up a poker face, Skull is a game for the stony-faced who like playing with the minds of others.

Along with all of these new arrivals, Amerigo is back. Acclaimed for its specialized dice tower element, this game challenges you to sail the Atlantic in search of gold and glory!