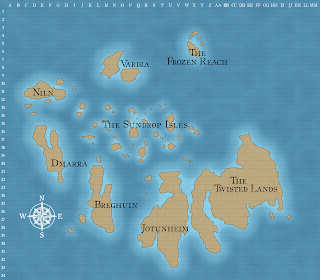 Last weekend the Guild of Heroes went on another four adventures with DMs Joe, Yoni, and Camilla. Players from 10 to 15 join us regularly for our ongoing campaign of the Dungeons & Dragons tabletop roleplaying game. Full reports of their adventure are written below.

Our next sessions are fully booked at the moment, but you can signup for our waitlists on Eventbrite. We will have two sessions on May 26th, one in the morning and one in the afternoon. Signups for the next session will open up Saturday, May 26th at 4:00 PM.

4/14
DM Joe - The King of Bone (Sundrop Isles - The Island of Bones)
Records in the Guild library referred to a mysterious figure known as “The King of Bones”, who was rumored to be the one who taught pirate Captain Bonebeard necromancy. The Guild asked a small group of heroes to find the King of Bones and convince or force him to tell them how to fight Bonebeard.

Entering the King’s tomb on the Island of Bones, the heroes found that it had already been looted by Bonebeard’s raiders. The King had been disassembled and the party had to brave traps, riddles, and undead guardians to retrieve his bones. Once awakened, the King of Bones agreed to show the heroes how to disrupt Bonebeard’s control of his skeleton crews, but only after they had bested his powerful wight lieutenant to prove their determination.

DM Camilla - Frostburn (The Frozen Reach)
As the Isles of Niln began warming for spring, six adventurers set out towards the remote islands of the Frozen Reach, still in the grip of winter. They each took the voyage in different ways; George raced along the rigging with the sailors, Ancestra entertained with music, and Sora kept her output over the railing and into the sea. The Mage’s college in Thaldoon had lost touch with a research station, and sent the party to investigate. 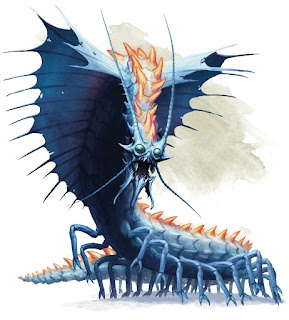 A local trader named Grimtooth had resupplied the mages for some time, meeting at a remote outpost. He pointed them in its direction, not knowing the location of the secret research station. Pearl led their trek across the tundra, through snowstorms and wolf attacks. They investigated the outpost. From the hot ashes of a fire, a surprise attacker emerged! It was a skittering arthropod with a searing hot belly, soon pierced by Tooth’s lightning breath and George’s rapier.

They journeyed even further north with a map they had found, eventually coming to the research station itself. Finding a better entrance through a second story window, they soon discovered the open vent within the central atrium of the research station, and the larger specimen nesting inside. Some careful and quiet exploration confirmed the sooty fate of the mages who once lived there. A clever plan and a close combat eliminated the monster, and the party was able to return home, knowledge in hand.

4/15
DM Yoni - Rattling Bones (Sundrop Isles)
The dread dwarf necromancer pirate, Captain Bonebeard, has been terrorizing the seas between Niln and Jotunheim for too long. The Guild of Heroes was tasked with seeking out his lair and putting an end to his piratic reign. Six brave adventurers set out to sea with only vague reports of where to find Bonebeard’s island. Aided by a magical ring of finger bones, they navigated through a heavy, chill fog over unnaturally frozen waters. Fleeing a pirate ship that came upon them, they hit an ice floe and crashed on the rocks, then made a run across the beach to the pirate’s domain.

The heroes fought their way through several rooms of the dungeon, encountering numerous goblins, a fire-slinging goblin shaman, and several members of Bonebeard’s literal skeleton crew. Eventually, they found a room that was even colder than the rest and swarming with Kobolds, and came face to face with a white dragon wyrmling! Luckily, it turned out the young dragon was also trying to make her lair here, and wanted Bonebeard gone more than she wanted to eat the heroes. After a tense negotiation, they were allowed to pass through, and only one obstacle remained: Bonebeard’s bugbear lackey, Kurrash. The heroes defeated Kurrash and his goblins in an epic battle, and finally made their way into Bonebeard’s necromantic laboratory, only to find that the pirate captain and his crew had escaped out a secret passage in the back.

Although the heroes failed to put a stop to Bonebeard’s piracy, evicting him from his base of operations will certainly hamper him for a time. But it is inevitable that he will one day return...

DM Camilla - Toothache (Isles of Niln)
It was a late night at the campsite of six adventurers of the Guild, fairly quiet as the wizards who made up their majority studied spellbooks and rituals. Out of the dark came a young man on a galloping horse. He breathlessly introduced himself as a blacksmith named Carper and spoke of a terrible curse that had befallen his village. In the last few nights they had begun losing teeth left and right!

Foregoing their rest, they hurried through the forest until they reached the sleepy village (quite literally). Their immediate investigation was fruitless, despite closely searching the village tavern and its keeper, Grisham. After some feline observation, and some minor tooth loss on the part of Zealous and Adran, the party had found the horrid fairies who had been prying loose the towns pearly whites (or cheesy yellows in some cases). They followed them to the magic ring of mushrooms they used to get to and fro, and overheard the song that bade their patron Rustyguts to transport them back home. 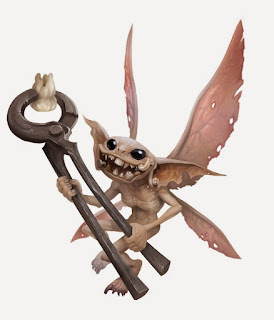 The party ambushed the fairies the next evening and held one of them captive. When they asked after Rustyguts, he spat in their faces “First you know his name, next you shall know his STEEL!” Taunting his pride, Portia and Roscoe got one of them to reveal their song of travel. Without delay, they danced around the fairy circle, fresh teeth and fairy coins made of tin clasped between their hands.

"Silvered moon, bone, and tin
Rustyguts, Rustyguts, let us in"

The moon swelled in the sky, and the treetops soared as the earth wrapped up behind the stars. It tucked away their forest to the inside of a small sphere. Up above them, on the top of the globe, they could see the ruined tower they knew to be Rustyguts’ lair. The very land itself opposed them. Trees slashed at their flesh, and rivers crawled up the skin to drown. At last, after being harried by blink dogs in the tall grass, they came to the tower, and engaged the fairy, the decrepit Rustyguts. He burst from his tower with a slam, and his iron boots crunched across the stone before slamming the party to the ground one after another. It wasn’t until being stuffed with bolts and thrown through the air by thunderwave that he finally gave in to the party, relinquishing his vault of ill-gotten teeth. 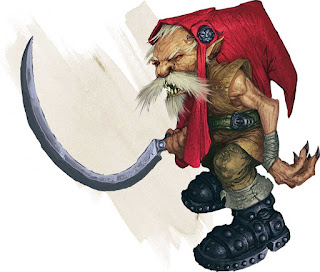 Posted by Labyrinth Games at 9:31 PM