The Guild took on a deserted dungeon for last week's Holiday Camp! Discover the dangers they faced below...

Last week marked the second Guild of Heroes camp, hopefully one of many to come! With only two days off from many schools, we tried to squeeze our favorite activities into the limited time. First things first, on Monday we got straight into character creation and miniature painting. There were a wide range of styles and background, from players who had never touched a brush to veterans of Warhammer or the Smithsonian’s diorama camp. Here are a few of their creations! 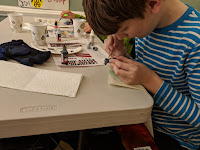 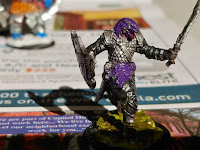 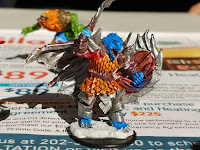 After lunch, we broke out the dice for two tables of D&D: 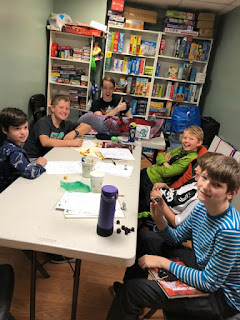 Our adventure for the camp centered around an ancient ruin, evidently a bunker built against unknown dark forces. The adventurers split into two groups, one to explore each of the entrances to the ruin, and made their foray down into the caverns.

On the Western side, Ancalagon, Wilson, James Hunter, Silas, and Flint explored an ancient High Elven fortress, complete with golem guardians, moon-glow swords, and a labyrinth full of wily constructs.

On the Eastern side, Dynn, Kuro Hirosana, Hachiman Kurai, Akida, and Happy fought smaller clay soldiers armed with silvered weapons (elven archers and dwarven hammerers), then slogged through a room of giant elven priests. Both groups found ghosts of elven leaders sitting at locked doors, but needed keys or combinations from the other side to get through.

On our second day, we put the power in the hands of our players, and helped them design and run their own one room dungeons. The variety was astounding, from cerebral puzzle rooms and escapes from captivity by giant frogs, to a classic toe-to-toe with wicked demons. Here are a few of the maps they used: 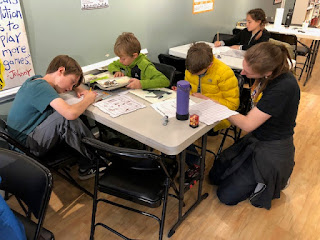 Finally, we went back to our staff-led D&D tables for a second foray into the tombs that had perplexed us the day before:

Each group returned to the same side as before, leaving the Western team to grind through a dungeon of mirror-ghosts and endless hallways while the Eastern team played around with an ancient polyhedral system of arcane purpose. Eventually, the Western team discovered an ancient beast of slime and shadow lurking in the joint depths of the bunker. They defeated it single-handedly while their compatriots explored the polyhedral system further.

It seems that the wretched abomination had beset the elves and dwarves hidden within as part of the giant's ancient conquest of the world. Exactly what this means for the recent resurgence of the foul creatures remains to be seen...


What is the Guild of Heroes? When can I play?

As the Guild faces new challenges at home on Niln, how will they manage the abominations from below and the other arcane threats that plague the world? There's only one way to find out! Sign up now for next month's Guild of Heroes adventures now (or hop on the waitlist, once we fill up) for Saturday Morning, November 17th or Saturday Afternoon, November 17th. We hope to see you there!
Posted by Labyrinth Games at 3:56 PM