What's New at Labyrinth: 1/20/19
Hey there, folks! We're back after the holiday break with a huge backlog of new stuff, so without ado we'll dive right in. Take a look: 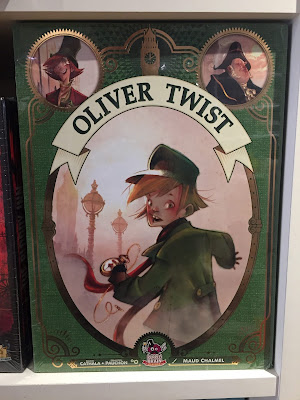 Victorian London is a harsh place for an orphan. Oliver Twist puts you in the seat of the have-nots: impoverished street children, picking pockets to survive. Snatch some loot, don't get caught, and bring your take to Fagin. Only the child who makes the most has a shot at escaping the streets! 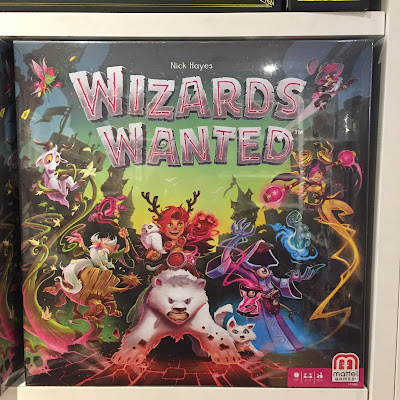 In Wizards Wanted, wandering wizards compete for fame and fortune. Explore the kingdoms, gathering wealth and knowledge, while balancing your wizard's reputation. The wizards who earn the king's favor will earn their Spell License to win. 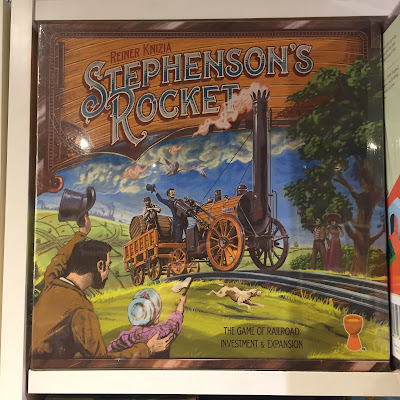 Stephenson's Rocket, Reiner Knetzia's classic game of railroads, returns! The early Wild West of railways was a heady time, and players compete to secure the valuable lines and gain a controlling interest in each other's stock. When two lines connect, the companies will merge! The game ends when only one company is left standing. 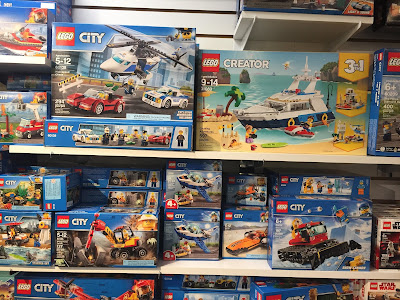 After getting cleared out by Christmas, we've finally gotten back new Legos! Star Wars, Ninjago, City and more: we have Legos for everyone! 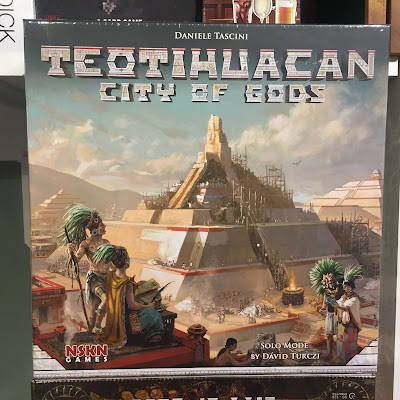 City of Gods is a new Euro-style game set in the era of Aztec glory. As prominent citizens of the titular Teotihuacan, you must compete for fame and glory by contributing to the construction of the holy Pyramid of the Sun. Players control a force of workers represented by dice, which you can upgrade over the course of the game. As you play, a pyramid of domino-like tiles will rise from the center of the board! Only the greatest of builders will claim victory in the City of Gods. 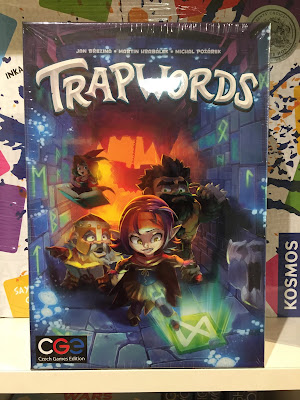 Trapwords is a fun new word game in the vein of Taboo. Teams of two compete to make it through a dungeon maze, by attempting to help their teammates guess the round's particular codeword. But beware: The enemy team designates a set of trapwords, and if you use one in your clues, you're sunk! A zippy party game for wordplay fans. 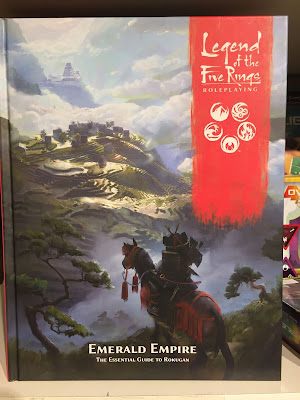 Emerald Empire is a new setting sourcebook for the Legend of the Five Rings Roleplaying Game. Dive into the people and places of Rokugan with this gorgeously illustrated book. This is an excellent resource for gamemasters and players alike.

Sekigahara: The Unification of Japan 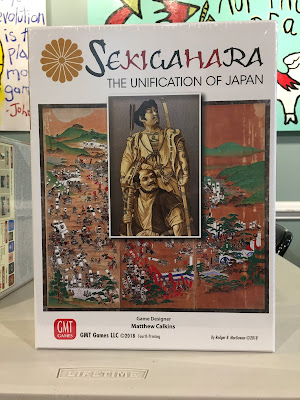 Sekigahara is a two-player historical strategy game (back in stock after a long time away) where players re-enact the battle that resulted in Japan's ultimate unification. Each player's forces consist of a cobbled-together army, whose loyalties are anything but certain. Appeal to the motivations of individual commanders to secure a critical defection, and dominion over all Japan! 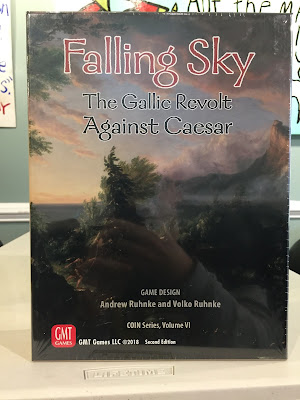 Also back in stock is Falling Sky, a one- to four-player game set amidst the tumultous days of Caesar's conquest of Gaul. The Roman Legions are the deadliest combatants in the region, but they are far from home and cannot be everywhere at once. Meanwhile, the local kings juggle alliances with and against the Romans as they vie for control. For fans of detailed games of political and military strategy, look no further.

A Game of Thrones: Hand of the King 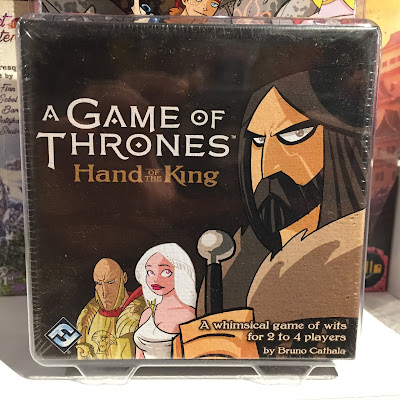 Hand of the King is a fast paced card game of cutthroat politics and subterfuge for two to four players. Amongst the great feasts and tournaments, you and your rivals jockey to be named the Hand of the King, and become the true power behind the throne. Care, precision, and luck will grant you power, but beware: when you play the game of thrones, you win or you die. 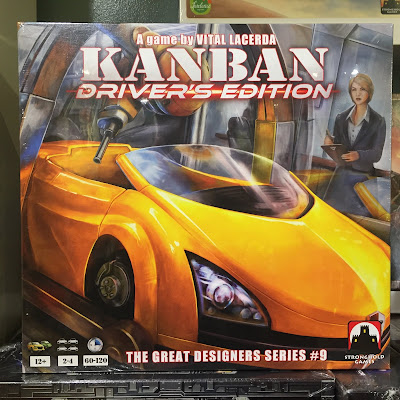 Kanban is a rich, complex game of automotive assembly (yes, you read that correctly). This new Driver's Edition brings back the deep, complex gameplay of the original, with updated components for a new era. Will you impress the upper management, or will your production fall short of the quota? 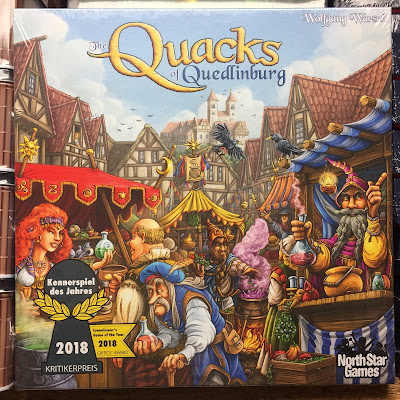 Quacks of Quedlinburg is a riotous game of concocting potions and conning customers. Play as a motley crew of miracle workers, snake-oil salesmen and, of course, quacks. Players must push their luck by adding bizarre ingredients to their cauldron. The stranger the brew, the more potent its powers, but too much innovation will lead to the whole mess exploding in your face! Walk the fine line between genius and madness to become the greatest miracle worker of Quedlinburg. 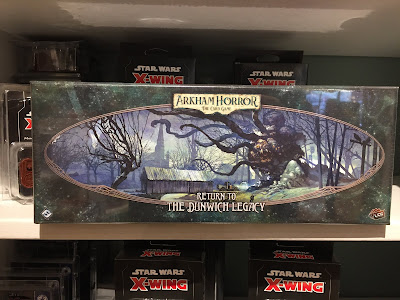 Return to Dunwitch Legacy brings the first campaign of Arkham Horror back in a marvelous fashion. Coming in a premium box sized to contain the entire campaign collection, it also adds over a hundred cards: new investigators, enemies, locations and more. Return to Dunwitch and delve anew into the secrets and conspiracies threatening all of time! 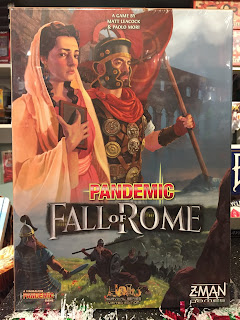 Fall of Rome is a new standalone scenario game for Pandemic. In the dying days of the Western Roman Empire, barbarian hordes from within and without the empire are breaking the shackles of imperial authority and establishing their own kingdoms. Can you stand against the tide of history and turn back the fall of Rome? 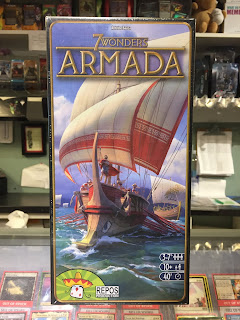 Long-time favorite 7 Wonders has received a brand new expansion: Armada! Take to the high seas, for commerce or for conquest, in an entirely new dimension to your civilization. Armada adds both another layer of strategic considerations and historical realism to an excellent game. 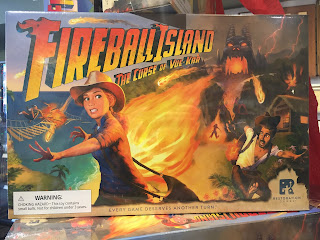 A childhood classic returns, bigger and better than ever! Fireball Island, of 80's fame, has gotten a new publishing run under Play It Again Games. Players explore the board, a giant 3-dimensional island replete with palm trees, rivers, ravines and cliffs. But Vul-Karr, the volcano god, does not tolerate intruders lightly! Dodge his fireballs rolling down the slopes and make it to the helicopter with the most gems to win! 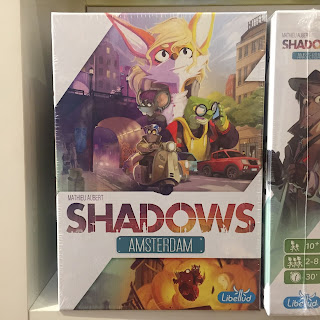 Shadows: Amsterdam is a game of intrigue and investigation in a classic noir scenario. A crime has been committed and the cops have shown no results, so an anonymous client has called in a crew of rival investigation companies to get to the bottom of things. Dodge the surly cops and your ambitious rivals to solve the mystery and secure a fat payday.

Posted by Labyrinth Games at 12:12 PM