The holidays have passed and the Guild is back to business as usual... these are the latest adventures of Niln's greatest heroes!

The Guild’s supply of iron ore had dried up; something was wrong at the mining town of Perfection. Answering the call, our party arrived to find the town nearly abandoned. What villagers remained informed the party of their recent troubles: dozens of disappearances, strange earthquakes, and missing livestock. The party began their investigation at the mine. They had barely crossed the threshold when they were attacked by a burrowing monster know as a bulette. A difficult fight ensued. The monster attacked from below and retreated into the dirt whenever confronted, but clever tactics and a heroic effort finally slayed the beast. The party returned to the town victorious, but the danger had not passed: their revels attracted three more bulettes. Outmatched on the battlefield, our heroes did their best to aid the evacuation. It took all their strength and cunning, but eventually the heroes prevailed, distracting the bulettes with a stampede of goats. The party returned to Ft. Stonespur with the surviving villagers in tow. Their town was in shambles, but they were alive thanks to the brave sacrifice of the Guild of Heroes. 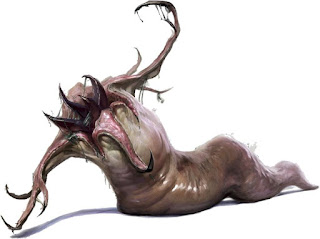 The heroes were summoned to help the Iron Bank investigate a theft from one of their vaults. Someone had burrowed into the vault from below and stolen several dangerous magic items that were being stored there for a wizard. To avoid angering the wizard, the bank asked the heroes to recover the items before anyone knew they were stolen. The tunnel into the vault turned out to be made by a giant Grick, which the heroes fought upon entering its lair. From there, they traveled deep into the sewers beneath the bank, discovering and shutting down the mysterious Elemental Tetrahedrons that were filling the sewer with tiny, angry elemental Mephits. At one point the portals even brought forth a more powerful Firenewt, but Happy reminded the creature of a time he had helped a large group of Firenewts in the past, and convinced it to return home peacefully. After fighting through another room containing a magical, darkness-producing lantern and a one-eyed Nothic that hunted them through the darkness, the heroes stumbled on their final challenge. The final corridor underground was guarded by smaller Beholder known as a Spectator. After failing to trick the Spectator into letting them pass, the party briefly stunned it and ran headlong down the passageway, dodging the Spectator’s deadly gaze as they ran. Tragically, when they arrived at the end of the hall, they found themselves short one member, as Paelias had been slain by the monster. The disheartened group recovered the last few missing items, and returned to the bank without their departed friend. After hearing about his noble sacrifice, the Iron Bank named a section of the building “The Paelias Memorial Wing” in his honor.


On a windy night beneath a full moon, the intrepid explorers of the Guild descended below the salty shore to find fungal nightmare. The Shatterrock Lighthouse has lain dilapidated and dark the past 60 years, and when the locals decided to put it back into commission, the construction crew vanished overnight. Venturing inside, they discovered a survivor with a horrific tale: oozing death from below! The players pursued the slimes below, and were nearly devoured themselves when they encountered two gelatinous cubes in an old subterranean labyrinth. Pushing on through a tangle of caverns, overgrown by fungi, they encountered a vast fungal cathedral, where a group of slime-worshiping mushroom men were poised to sacrifice the captive workers to their slimy gods. Through bravery and quick action, the heroes dispatched the rubbery foes and saved the day. 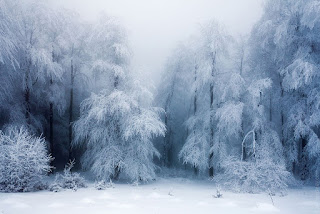 Today's session found the guild's finest heroes - Orryn, Berrian, Drawfinistination, Happy, and Blackhorn O'Slay - returning from a successful capture mission with a dreaded warlord in tow. As a blizzard began, however, the party found themselves trapped outside overnight. Upon waking in the morning, the world had changed, with ruined statues rebuilt and the remnants of a battle appearing overnight. On further exploration, they found giants working with elves and humans to fight off an inhuman tide of abominable ooze. Stunned by the anachronistic dress and the strange language of the villagers, the party investigated further - only to be pursued and besieged by the waves of evil muck.

Driven back to the village, our heroes were tragically defeated, with multiple of them falling to corruption - only to awake, and discover that their experience had been a vision sent by a high elven wizard named Zadelrazz. He fears for the future of Niln, and wishes the Guild to investigate the abominations, but it remains to be seen if his worries will come to pass...

Join the guild as they venture in further danger, and vanquish foes yet unknown to this realm! February's events are already full, but the Guild's adventures with pick up in March with our morning and afternoon sessions on March 23rd, as well as our August summer camp beginning August 5th, 2019!

Posted by Labyrinth Games at 12:30 PM